I was first introduced to the BattleTech universe in 1994.  Twelve years old at the time, my family would often take vacations from our home in Grand Rapids (Michigan) to Chicago, only a three-hour drive away.  On one of these trips, we stumbled upon the BattleTech Center at Chicago’s North Pier.  I was instantly hooked and made my parents take me back to play in the pods every time we went to Chicago.  During one of the visits I noticed a BattleTech: Third Edition boxed set on the counter and asked a bit about it.  I had never played a tabletop miniatures game before, but I convinced my parents that I had enough allowance to buy it and spent the next few weeks playing against myself and anyone I could trick into playing with me. 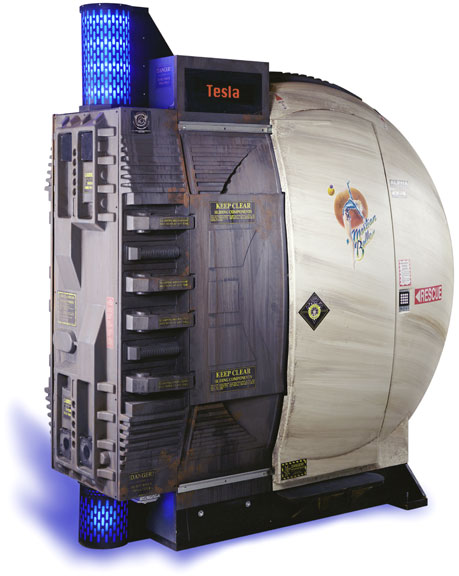 Going on twenty years later, I still remember how excited I was the first time I played in a BattleTech pod.

For those of you that have never heard of or experience a pod, you’re missing out.  BattleTech pods are fully-enclosed cockpits with multiple screens, joysticks, and rudder.  You play in a heavily-modified version of MechWarrior 4 (called BattleTech: Firestorm) against a dozen others at the same location.  The fighting is intense and a whole lot of fun — you really feel like you’re in a ‘Mech once you step into the cockpit.  It’s an experience everyone should try.

In 1999, Nick ‘PropWash’ Smith bought several pods and eventually purchased all interest in Virtual World Entertainment in 2005.  He helps lead a small community of independent gaming centers that still operate the pods.

Today, there are still 7 public centers in the US.  I’m lucky that Big Kidz Games in Grand Rapids has a bunch of pods within a 10-minute drive of my house.  Additionally, several of the groups have been bringing the pods to conventions such as GenCon, Origins and Dragoncon.

While I was at GenCon last week, I was able to take a few minutes of Nick Smith’s time to ask him about how he first got introduced to the pods, what the challenges of running these old cockpits are, and what’s in the pods’ future. 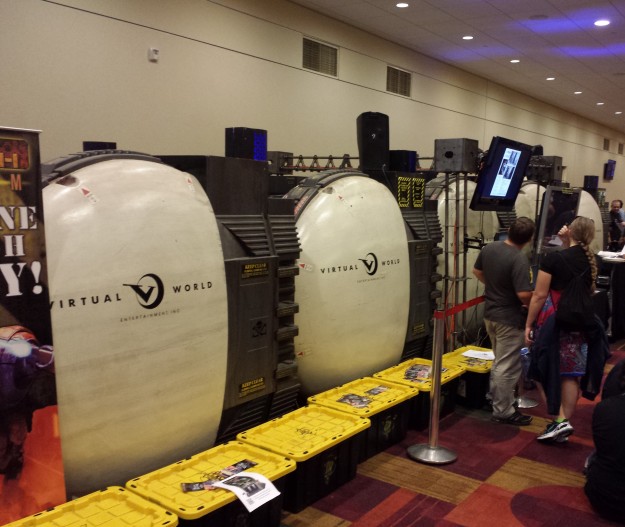 NJ: When did you first become involved with BattleTech pods?

NS: The inspiration first started when I saw a Nintendo Power competition to go to the BattleTech Center in Chicago.  I was just getting into gaming, and the idea of piloting big, walking robots in an actual head-to-head environment was completely new and unique.  I had never seen anything like it.  So finally around 1991, I had an opportunity to travel to the BattleTech Center to play with some friends from school, after that, it kind of became my “thing”, to travel three hours from Michigan to play (I was in Kalamazoo at the time).

Around 1999, I was scouring the internet, like many other people, trying to find out more about where did the old cockpits go?  We knew some of the old BattleTech stuff had been retired, but they certainly didn’t throw them out right?  Turns out, in many cases they did!  But after a lot of searching I hit paydirt, I found an obscure Usenet post from a guy named Gordon that worked for Fighter Town in Irvine, CA, that they were getting rid of some old non-working BattleTech pods.  And he had a price!  I contacted them, they gave me the details, and I was on a plane out to California two days later.

I just wanted one — a Martian battle pod, to have it, maybe convert it to a cockpit environment for my PC.  Well I went out there, and decided to take advantage of economies of scale and bought five of them, loaded them into a 26′ truck, and drove them back to Michigan.  The intent was to sell the other four and keep the jewel.  It didn’t take long before I was contacted by some other former employees of Virtual World, explaining to me what I needed to do to keep them running.  So the quest begins, and against all odds, within three months, I had four working cockpits running out of a rented garage of an apartment complex where I was stealing power from the light socket in the garage.

From there, I was heavily involved with the community, always trying to do community development.  Trying to get involved anywhere I could with the connections I had with WizKids, FASA, Virtual World Entertainment, Day 1 Studios, MekTek and at that time FanPro. It eventually lead up to an opportunity in 2005 when I bought Virtual World Entertainment.

Since then, I’ve been trying to keep the cockpits around the world running, trying to maintain our owners’ community, and come up with ways to keep this ship flying.  For the last 5 years, we and a few other groups have been going on the road with cockpits and taking them to conventions.  This has really breathed new life into the pods and has really provided people the resources needed to keep them going.

NJ: Which conventions are you guys going to now?

NS: We, the MechJocks crew, are a virtual crew out of Michigan.  I primarily do Origins, GenCon, and Anime Central, but our crew also does Youmacon and some other smaller conventions around the Michigan, Ohio and Indiana area.  We also have the Fallout Shelter crew out of Minnesota, they do events like Convergence and Anime Detour.  There are two mobile crews down in Texas.  One group out of Houston, MechCorps, does a lot of big events down south, notably Dragoncon.  And then there’s a group out of Dallas that does a few conventions down in the Texas area as well.

NJ: How many pods do you own?

NS: The ownership of individual cockpits can sometimes be a mixed bag.  In our case, we have the original 8 Chicago BattleTech Center cockpits.  Those are not technically owned by the company, but are managed by VWE. Those are co-owned by a small group of old-school BattleTech Center pilots.  Their names would probably stand out to people that had visited the Chicago center.

The owner of the game store Big Kidz Games in Grand Rapids, where we keep all of them, has ownership of quite a few as well.

I also have various ones owned either by myself or the company as well.  It’s a bit of a mixed bag of paperwork, but we have 18 of them currently up in Grand Rapids.

NJ: What are some of the challenges of keeping all these old machines running?

NS: Some of the biggest challenges are dealing with the fact that these cockpits were meant to be installed and never moved again.  We’re talking the physical hardware, the cockpit itself, was manufactured around 1994-1995.  Some of these, including these ones here at GenCon, which have seen the most actual deployment, have been deployed well over 20 times.

We’re certainly coming up with creative ways to keep the wood / plastic hardware staying together after being moved around.  But surprisingly our biggest challenge is actually the PCs themselves.  We use a really strange video card / driver / software geometry to accommodate a very heavily modified version of MechWarrior 4 for the Firestorm platform.  When you’re dealing with older vintage PCs and weird video card geometries, it’s pretty difficult to get those 3 video cards to play nice.  We found that when we get into newer hardware and newer video cards, there’s a lot more plug-and-play technology that’s not really compatible with the way we do our video subsystem.

A lot of our proprietary hardware that we maintain, I’ve actually found people to remanufacture some of them.  It’s often the misconception that the problem is our proprietary stuff.  No, the proprietary stuff is pretty bullet-proof.  It’s actually the PC.  It takes an extraordinary amount of time to configure and get a new kind of computer to properly work.  We go through thousands of dollars of buying hardware that turns out doesn’t have the muster for one reason or another.

NJ: Do you guys ever consider building new cockpits with either the same hardware, or a completely new system?

NS: New cockpits was one of my original goals when I bought the company, but coming from a background of manufacturing and IT technology, I knew that it could be a pretty significant challenge to get the correct price point.  Finding that balance between what the market can stand and what we can manufacture it for and still make money.  It turns out that demand really isn’t there for that premium of a product. We found that the stuff that’s really mainstream, distributed and sellable on the global market, in my opinion, wasn’t that compelling of a product.

The other challenge of course is your software development. The platform means nothing if you can’t have a lot of software experiences.

Like any business it comes down to capitalization.  You can have the greatest idea in the world but someone has to pay for it.  We actually had some potential investment, some foreign investment, and the market just went the wrong direction with the recent global downturn, and some of those investors just dried up.  Since then, I simply haven’t been able to make the numbers jive to make this a compelling and viable product.

NJ: So what does the future hold?

NS: In the near-term, we’re simplifying the mission.  We scaling back a lot of our community development (our website has been fundamentally dead for a few years).  All of our individual sites really have their own identity that they want to protect and nurture, and we’re not in a position from the top-down to provide a unified community in a way like we did before when we owned all of them.

The mission is being narrowed to purely keep the cockpits running.  I focus on part supplies, making sure other clients that aren’t as well integrated into the online community know what’s available and what they can do, and try to provide them with what they need.

Certainly, we’ll continue in some fashion or another doing the convention circuit.  It’s really the one that keeps the lights on.

NJ: I really appreciate taking your time to talk to me Nick.

You can find more info about BattleTech pods at MechJock.com.

Wikipedia has a list of currently operating BattleTech centers:

If you get the chance, you should check out one of the above centers, or find the pods at GenCon, Origins, Anime Central, Youmacon, Dragoncon, Convergence, Anime Detour and other conventions that they travel to.

You won’t be disappointed.