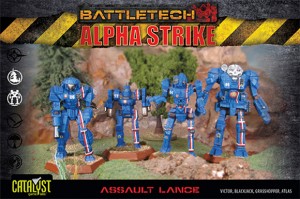 Assault Lance assaulting something or the other.

Announced today, Catalyst Game Labs is issuing a reprint of the successful Introductory Box Set to meet demand, and should be back on game store shelves by late summer of 2014.

Also announced is a line of Lance Packs, using the same improved plastic miniatures found in the Introductory Box Set. Each set will be retailing at $19.99, and although no specific release date has been given it is expected to hit the streets late this year. The Assault Lance Pack and the Pursuit Lance Packs are the first ones to be going out the warehouse doors, each one also packed in with eight Alpha Strike cards as an added bonus.