As I invested my 130th hour of play into the recently released Fallout 4, I turned off the game for a few days, vowing to rejoin society.  I re-emerged into the light-scorched winter landscape of my New England residence.  As I saw the trees outside, denuded by weather, and mirrored in them the signs of post-apocalyptic ruin in the Fallout universe, I turned to BattleTech and began to wonder if it was a post-apocalyptic universe.

Obviously, the ultimate view on whether or not this universe counts as post-apocalyptic is up to you as a reader, gamer, and enjoyer of it.  But it strikes me as an interesting question to explore.  As someone who began playing in the 3025 era, the flavor certainly has a post-devastation feel.  There are multiple events in the universe that have some of the auspices of post-apocalyptic fun.  The Amaris and Secession Wars devastated the great Star League, and rent and destroyed numerous planets and areas. 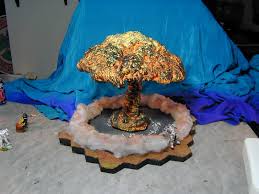 The Boom! (Courtesy of Swordguy from B-Tech forums)

Certainly some planets would argue that this was very apocalyptic.  Take Bryant.  During the Star League, the various Storm Inhibitors installed around it were able to turn the planet into a livable one.  And then they were destroyed and the planet became unlivable everywhere save for the polar regions, leaving vast wastes and ruins everywhere.  Sounds like an apocalypse to me.

And the feel of the early game has that as well.  BattleMechs are a lot more valuable than soldiers or their pilots.  They are artifacts and relics of wars past, and are more precious than anything. But as we flesh out the era with later novels, sourcebooks, and more, it seems like the “loss of civilization” seems a bit dramatic.  From high tech weapons that survived to numerous factories that still made ‘Mechs, the era was more rife with Star League era technology than initially reported.

That’s nothing new.  The supposedly Sphere Rending Event of the Jihad only resulted in the destruction of a relatively insignificant 15 worlds. Compared to how huge the Inner Sphere and Near Periphery are, that’s not a lot.  Many states have just one or two planets, at most, taken out.  Again, the supposedly devastating events of the era aren’t always matched.

I’m not sure that the fall of the Star League counts though, not  to my mind.  History is rife with fallen Empires, and chasing them.  Europe looked longingly at the fall of Rome quite fondly, and was often trying to replace it for centuries.  But the early Middle Ages of Europe certainly isn’t post-apocalyptic.  And many writers put into their great works concepts of a lost and great nation, from JRR Tolkien’s lost Westernesse and other great nations long since fallen, to the ancient Empire of Atlantis.   We have the Great Cataclysm that changed Krynn forever in the Dragonlance shared universe, and the original trilogy is about restoring the world a few centuries later.   Shoot even many works about King Arthur and his Camelot are penned with an eye towards, “This is once how great things were, and then they fell.”  From the Garden of Eden to Vesuvius, there are a lot of myths, legends, beliefs, stories, and histories that intersect.

The Star League’s fall is certainly iconic as a major loss of unity, and the subsequent fall into increasing faction-ization, warfare and technology.  It’s very similar to the Fall of Rome.  And a lot of people later on may look overly warmly on the Star League and what it represented.  But is it truly a post-apocalyptic universe?  Are there any other points along the timeline that you can look at and say that yes, this counts as post-apocalyptic?  (Gray Monday, Jihad, anything else?)

What do you think?

6 thoughts on “Is BattleTech a Post-Apocalyptic Universe?”