After a flurry of development releases over the last few weeks, and a variety of attempts to quell various bugs and issues with the program, the latest stable release of MegaMek was announced on October 24.

MegaMek is a java-based program that enables people to play BattleTech either against others or against an AI controlled ‘bot.  You can combine it with a variety of programs to play units you created, play in online campaigns, or chart your own in single-player style. 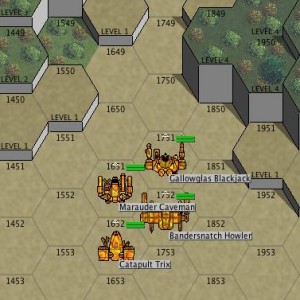 A Lance Creeps Up (Courtesy of MegaMek.info)

The latest stable release follows from a development version released in early September, with multiple development versions coming out.  Each one was aimed at fixing various bugs, and the change-log is rife with various updates and countless fixes since the first release.  The culmination of this activity is the first stable release in a long time.

This is a great opportunity to grab the program and either try it for the first time, or reestablish your love for the program by getting the new version, likely to be relatively free of bugs and issues.  Enjoy!