There’s been a new wave of mobile big robot games, and one of the more interesting I’ve been playing lately is one that’s hard to categorize. As you might expect with a game with such a clunky title, M2: War of Mech Myth is a rough translation. I just call it Mecha Warriors of Myth or M2.

Developed by Taiwan-based company Interserv, M2 is a fusion of style and form. It’s a fun little beat-em-up/shoot-em-up that has you playing both a human character (male or female) that can wield a sword or some other melee weapon that can call upon and turn into a large, Super Robot Wars-style mecha with its own weapons and abilities. Shades of Moonwalker’s “Mecha Jackson”. You better be swift though because you can only stomp and jump around in robot mode for limited time based on your level.

There is a friend mode, though I don’t know anything about it as of now because it seems to be unsupported for English speakers. If you could grab a friend and go beating up on robots together- that would be amazing.

The game is free to play, which brings its own pros and cons. Namely weapons and upgrades you can only access with real funds. But the free version is still really fun. It’s unfortunate for me because I prefer free/trial versions of games and then if I like it, buy the full version. Free to play is completely open, and you can sink hundreds of dollars into it if you want and there is no clear beating of the game, only bigger stat values. The game ends when you become bored with it, not when you beat it. It doesn’t give me any real sense of accomplishment. Like many other F2P games, M2 seems to have no real storyline to it; which is unfortunate. 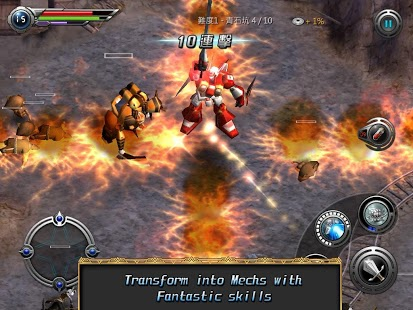 Martial artists turning into giant combat robots? What’s not to like?

The only technical problems I have had are probably hardware-related. I use a Rugby Pro phone and the game is very large and is clearly optimized for tablets. On my particular device there has been a noticeable (and annoying) slow down when besieged by large numbers of enemies. Which is constantly. I also have had trouble re-orienting my character to face where I want. But as well developed as M2 is, I’m almost positive it’s just the limitations of the phone.

Everything about this game is an eclectic mix of genre and style. The music drifts from some of the more fanciful ‘Chinese fantasy’ sounding to generic hard rock. The enemies range from cutesy-looking teddybear/cat looking things and ducks to giant robot mecha. This also includes giant scorpions to something resembling the Dougram mecha used as the Unseen BattleMech Scorpion. The fights take place in vaguely arena-like venues, and the only objective is to clear waves of bad guys, level up and find the occasional secrets you can only access in mecha form. The scenes are very well done and colorful and with semi-destructible environments.

The setting reminds me of Final Fantasy Six. With both melee and projectile weapons, steampunkish airships, and high tech mecha, and even the outfits of the humans is reminiscent of that whimsical Square-Enix game series.

If you like to see big mecha laying the smackdown on swarms of barnyard animals and other big robots, give this one a shot. It looks good, it sounds good, and it’ll keep you entertained for a while.