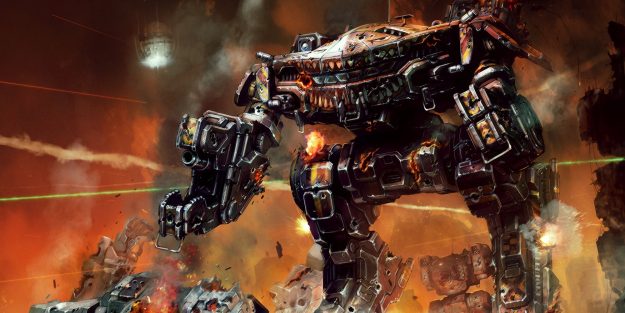 Another year, another Mech_Con has come and gone. Sadly, yours truly was unable to attend this year’s convention due to financial constraints (and because I couldn’t find a couch to sleep on in Vancouver), but that doesn’t mean we won’t talk about all the latest and greatest announcements that came out of the biggest BattleTech-only convention of the year.

This year’s convention was a 2-day affair, which means instead of trying to jam 24-hours of BattleTech awesomeness into a single 12-hour period (which went well into the wee hours of the morning if I recall correctly), the organizers have spread the announcements over both Saturday and Sunday. As the first day is all about MechWarrior Online and MechWarrior 5: Mercenaries, we’ll be talking about those first.

Last summer, MechWarrior 5’s December 2018 release date was pushed back to be sometime in 2019. Now, we have a specific date in 2019 when we can expect to see the first single-player MechWarrior experience in nearly two decades. 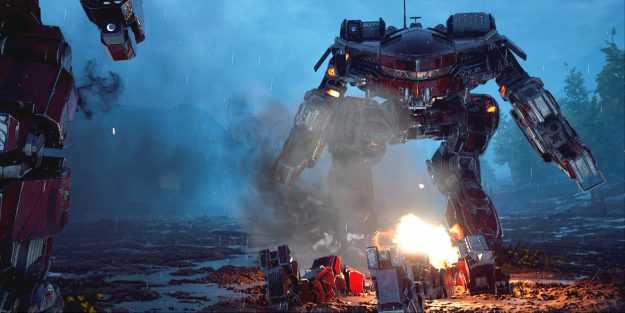 Along with the announcement at this year’s Mech_Con, developers Piranha Games dropped a brand new trailer to give everyone a taste of how it will feel to be a mercenary commander.

The trailer very much reminds me of Mechwarrior 2: Mercenaries, and I suspect that’s very much by design. First, you see your female commander ride her Victor into battle against a Hunchback and a King Crab. Being out-gunned nearly two to one obviously doesn’t go well for the Victor, who blows up before even being properly introduced. 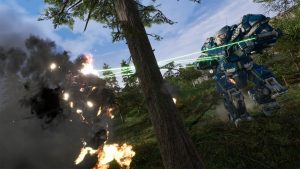 Next it switches to the player, who starts off in a Cicada. This again reminds me of MechWarrior 2: Mercs as my first ride after performing the Commando-required training missions was always the Cicada.

Of course, I was very young at the time and didn’t understand that the Cicada was a terrible ‘Mech. It went fast, had a few lasers, and weighed more than anything else on the field, and that was good enough for me.

After the Cicada, the player seems to upgrade to the Griffin GRF-1S, then follows that up with a Dragon, a Thunderbolt, and finally a Stalker. The clear implication is you build up your mercenary company from battlefield salvage as you go along, much like the old MechWarrior: Mercenaries games did.

Some of the big takeaways here are the sound effects, which seem vastly improved over last year’s trailer, as well as the graphics and environmental effects, which are also improved.

Of course, this is just a trailer and not necessarily indicative of gameplay. That’s why we also have a 20-minute gameplay demo that also shows how far MechWarrior 5 has come since last year. 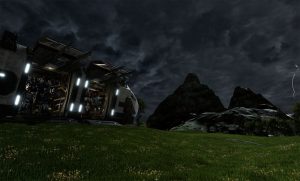 This gameplay demo comes courtesy of Giuseppe over at Twinfinite, who was lucky enough to sit in one of the 4 “pods” that PGI set up for Mech_Con. Each pod had a full Thrustmaster joystick setup and was tied together to test MechWarrior 5’s co-op capability, which is sure to be a game-changer for the series.

The demo starts off which each pilot walking along a dropship gantry to pick which ‘Mech they’ll pilot. Giuseppe hops aboard a Thunderbolt, which is a fantastic choice if I do say so myself. I’ve gotta say, the dropship’s Mechbay is a very impressive addition to the MechWarrior franchise and really gives you a sense of scale for the ‘Mechs you’ll be piloting.

As soon as the game starts, you can see a drastic improvement in graphics from last year’s game. Last year, things looked very drab, dull, and plain. This year, the colors seem more vibrant and there’s a much greater emphasis on textures and greenery to make the terrain come alive.

Admittedly, it does seem that framerate issues remain, so optimization will be a big deal. But PGI has 10 months to figure that out, which should be plenty of time. If last year’s game was a playable alpha build, this year seems much closer to a playable beta build.

Of particular note was the voice acting, which seems to take a page out of BattleTech’s book and casts some memorable voice actors to belt out some lines when beginning a mission.

The music seems adequate if not particularly outstanding, but that’s also subject to change in a year, and I’m sure you can always replace the tunes with MechWarrior 2 covers if you prefer.

Along with the 20-minute demo, we also got a sweet piece of box art for the game. Although it seems highly unlikely anyone will actually buy this game in stores, you still gotta have something to put on a web page to advertise your game, and once again, the talented Alex Iglesias hits it out of the park with this terrifying image of a rampaging King Crab. 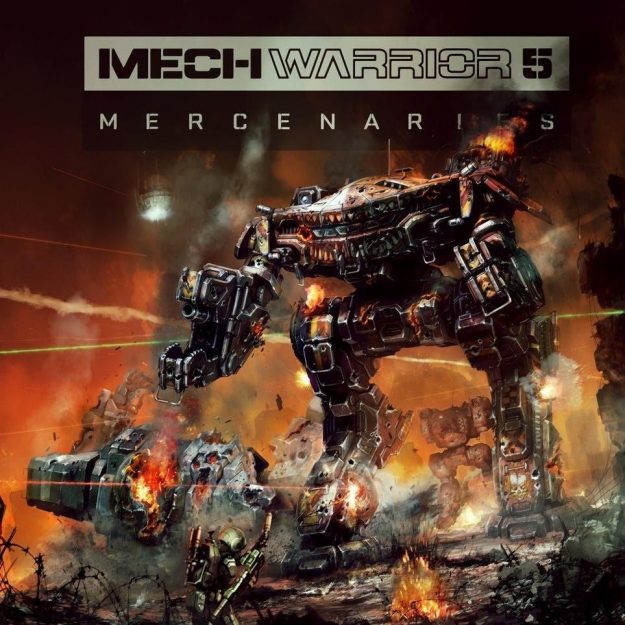 Since when did the King Crab become the poster child of the MechWarrior franchise? It seems all the marketing material is going King Crab over Atlas these days.

Just like last year’s introduction of the Sun Spider, PGI is bringing yet another brand new ‘Mech to the world of BattleTech. 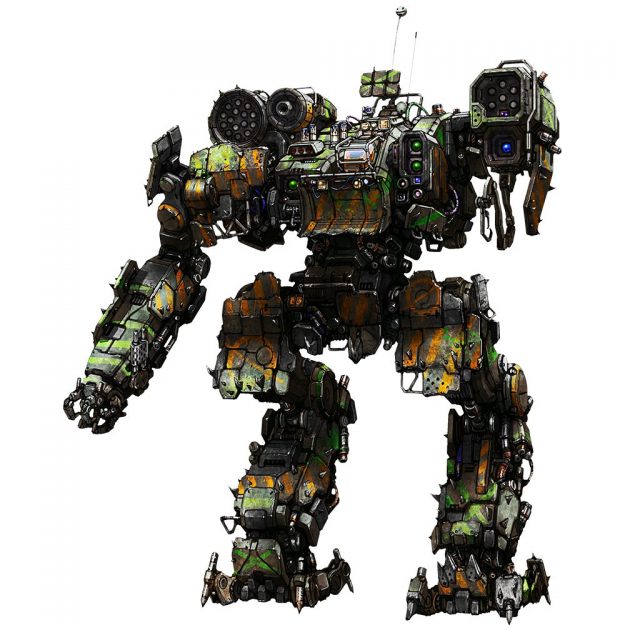 It’s called the Corsair, and Catalyst Game Labs’ Randall Bills has once again given the new ‘Mech his blessing with another fantastic short story describing its origin. I highly recommend going over to the MechWarrior Online website to give the Corsair a quick read-through, or you can get the Cole’s Notes version on our very own Wiki here.

The Corsair is described as a classic “FrankenMech” made from the bits and pieces that periphery bandits and pirate groups can salvage from whatever is available. According to the ‘Mechs description on the PGI website, all of these pirate FrankenMechs are cobbled together from various heavy and assault ‘Mechs and given the blanket designation of “Corsair.” This would mean that Corsairs don’t have any particular weight or loadout and can be made of pretty much anything.

And the Corsair’s visuals certainly confirm its hodge-podge nature. Its chest looks like the blade of a bulldozer, its right shoulder seems to come from a Thunderbolt, while the legs are only vague symmetrical without having any symmetry to their armor plating. Your guess is as good as mine as to where those arms came from. 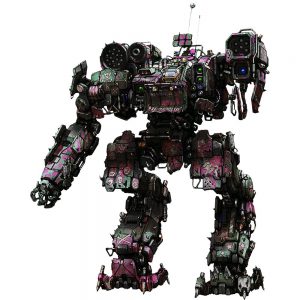 However, when the Corsair is introduced to MechWarrior Online later in March, it’ll come with a set of standard loadouts and designations much like every other Inner Sphere ‘Mech. This sort of belies the Corsair’s FrankenMech nature by making every version come with the same tonnage (95-tons) and one of 5 weapon loadouts, but it’s likely that a variable weight ‘Mech would require a drastic overhaul of MechWarrior Online’s base code.

With MechWarrior 5: Mercenaries only 10 months away, there’s no way PGI would pour that kind of manpower just to make one ‘Mech a little more flavorful. If we’re lucky, we’ll see some true Corsair-style ‘Mechs in MW5.

The COR-5R sort of looks like if an Orion had sex with a Thunderbolt and then ran headlong into a bulldozer. An AC/10, LRM-15, SRM-6, 3 Medium Lasers, and one Large Laser is surprisingly competent for a pre-Clans era Inner Sphere ‘Mech. It looks like there are enough hardpoints to allow for quite some variation too.

As with any MechWarrior Online ‘Mech, the Corsair’s true performance will all come down to its quirks, but we won’t know about those until closer to the ‘Mech’s ship date on March 19th. 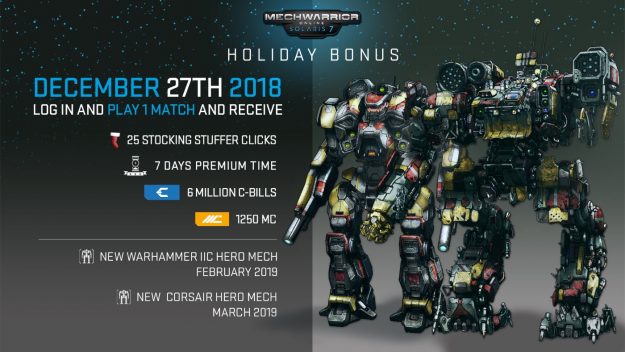 Last year, if you played MechWarrior Online on December 27th, you got two free hero ‘Mechs (the Sun Spider and the Roughneck) along with a ton of in-game cash and free loot. This year, they’re doing the same thing by giving away the hero variant Corsair as well as the upcoming Warhammer IIC.

A lot of people have fond memories of the Warhammer IIC as the best damned 80-ton assault ‘Mech you could use in MechWarrior 2. Those same gamers are hoping it will be the best damned 80-ton assault ‘Mech in MechWarrior Online. You’ll be able to find out for sure on December 27th if you play just a single game. You don’t even have to win--you just have to play.

Along with the ‘Mechs, you get 6,000,000 C-Bills in spending money (which should be enough to customize one of the two ‘Mechs), 1,250 MC (which is game equivalent of real-world money), and 7-days of Premium Time to encourage you to play a little longer than one game.

And that’ll do for today! Join us next time as we cover the MechWarrior Online World Championship Finals, announcements from Harebrained Schemes and Catalyst Game Labs, and maybe even peek at a few of the posted photos over on Twitter.