One of the things I like about the progression of technology is that it is so much easier to network and promote new ideas. There are some great opportunities for “the little guy” to make a name for himself with luck and a strong grasp of networking. (Something I wish I’d learned way back when). BattleTech, and tabletop gaming in general have even benefited from the influx of new blood, despite being considered ‘quaint and archaic’ by the younger generation’s tech heavy gaming standards. 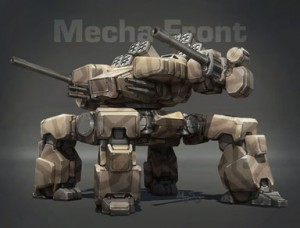 But making money on a labor of love hobby project is a different weight class altogether. Jon Paulson’s Custom Miniatures and Parts is an as yet obscure website that sells custom designed generic weapons and mods for miniatures; typically Warhammer and BattleTech. What interests me however at the moment, however, is the game system he is in the process of creating. The array of mecha designed by artist Anthony Scroggins (TRO 3145 Mercs cover art) also lends a solid and familiar look to Jon’s vision.

Nowhere near the size or scope of BattleTech, the game is set on a bleak, resource deficient near-future Earth. Mecha Front features a small number of mass produced and custom chassis with fully modular limbs and weapons (Think Armored Core instead of Omnitech). The setting and design are reminiscent of the Front Mission series of turn-based, 3rd person sim and RTS tactical video games by Square Enix. 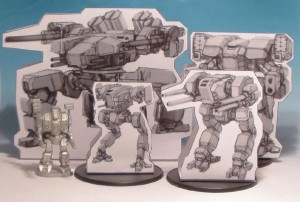 Being Anthony’s designs, the mecha I’ve seen are similar enough to stand in for some custom or remodeled versions of many BattleTech battle and omnimechs. Assuming, that is, that you play N-scale BattleTech. As you can see here compared to this standard scale Warhammer, these are big, beefy minis. No clue yet what Paulson’s prices will be once his production starts, but judging by the prices of the products he has in place already suggests a fair deal all around. Don’t forget that his initial series release will have a limited number of chassis with emphasis on unit and mission customization, which will help stretch your dollar buying as well as his for development.

One thought on “Mecha Front”