MechAssault: Phantom War. This is a game I actually picked up and own to this day for my Nintendo DS. Instead of the masculine no-named Wolf’s Dragoon MechWarrior from the first two games, the player gets Vallen Brice, A multi-talented pilot from the Lyran Alliance. Her unique (from a video game perspective) blend of technical and physical skills in addition to her affinity for piloting ‘Mechs leads me to believe that Brice is a Loki agent, though I don’t specifically remember it coming up in the game itself.

I also think it’s an interesting departure from other games from within the BattleTech Property from this time. The FedCom civil war was still very much a thing. And with games like MechWarrior Vengeance, Black Knight, and MechCommander 2, House Steiner was very much a vilified organization. I like that instead of going with a Mercenary or Davion protagonist. Though it would be more refreshing still to see some even more underutilized factions in a video game. I digress. 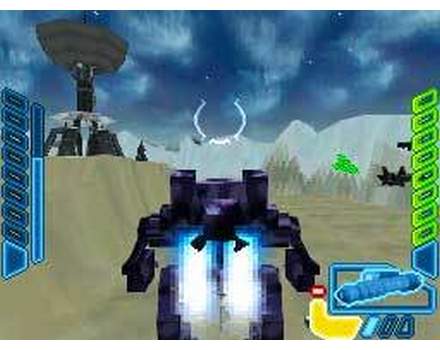 Mobile Uller action. Unless you have an IOS device you won’t find better for now.

As far as DS games go it’s fairly nice, though graphically my big issue is the environment. I understand the limitations of the DS hardware- which I would say falls somewhere between N64 and PlayStation One in quality. But the environments are very bland and confining. It’s almost claustrophobic and you will always find yourself stuck within some sort of trench or maze-like wall system. It almost reminds me of a rail-shooter at times. Which means that there are choke point ambushes; and a whole lot of them. It tends to get old.

I liked the touch screen interface as used in the game, which featured a radar surrounded by function toggles for dismounting from the ‘Mech, switching between your weapons, etcetera. My only beef with virtual buttons is the lack of touch feedback- which is needed when your eyes are glued to the top screen in the middle of combat. But with my usual fare of smartphone and tablet games, you learn to live with it. 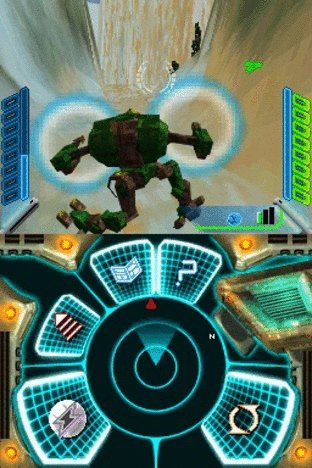 Its not a H.U.D. if you have to look down while fighting.

Like MechAssault 2, you have the ability to hack into and access ‘Mechs and other vehicles. This time however, you are using the touch screen (unlike smartphones, a stylus is really needed here) to play a connect-the-dots style minigame. Win and you gain the use of the vehicle or open the door to the next area.

The ‘Mech assortment is your usual mix of a few new and iconic Inner Sphere and glut of Operation Revival-era clan goodies. As par for the course of previous MechAssault games, each ‘Mech has an alternate configuration that looks the same but has a different weapons mix. They look pretty good- great when compared to the truly lackluster backgrounds. My favorite overall is the Raptor. It’s pretty fast, hits hard, looks mean, and generally makes a mess of things. The thing I like the least about Phantom War and the rest of the series is the ‘super’ abilities that each ‘Mech has that have little or no basis in the franchise- like energy shields on the Ragnarok, for instance. 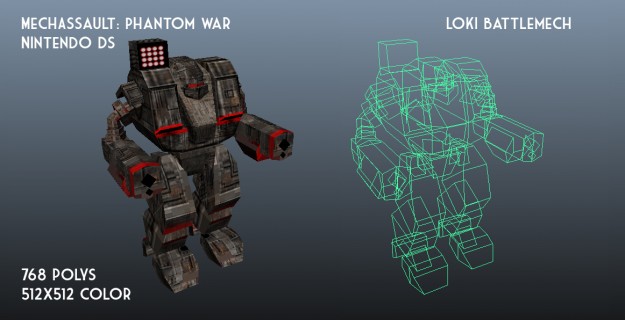 Map and mesh view: I like the symmetrical ‘Marauder’ arms over the traditional LBX-armed “prime” mish-mash

The story arc seems to be set at some point in Dark Age setting. A computer virus has corrupted several key HPG generators; and upon hearing rumors that the generators might be somehow weaponized, the main character is dispatched to several affected planets to hack into and disable each generator. Vallen Brice is shown with a dark, skin-tight single-suit. She moves and fights unaugmented much like The Black Widow or Joanna Dark.

The cut scenes and voice over work is quite good, but doesn’t make up for what was a fairly short game. I probably finished after between six and eight hours. The game is linear, so replay value is fairly low. There was a multiplayer option, but I’ve never attempted to use it. If anyone can fill in the blanks there, feel free to do so in the comments.

Overall, I like the game. It’s the only mobile BattleTech game I can play without stealing my girlfriend’s Ipod or running the original MechWarrior or BattleTech 3050 on a SNES emulator for my phone. And I’m a fanboy, so color me biased.