I know we JUST had a news dump, but I felt that this was just too cool to wait for August.

So there’s a lot of really cool mods available for MechWarrior 5: Mercenaries, ranging from simple tweaks that improve things like the HUD or visuals, to far more all-encompassing mods like Navida1’s MW5 Mercs Reloaded. The mod we’re going to discuss today goes beyond even Reloaded in terms of fundamentally changing the way you play MechWarrior 5.

It’s called MechCommander Mercenaries for a reason. This is a total conversion mod that changes MechWarrior 5 from a first-person ‘Mech simulator game into a third-person ‘Mech real-time strategy game.

That’s right: MechCommander is back. 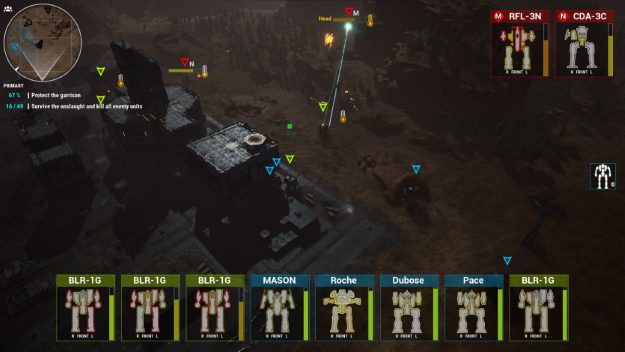 Obviously, what’s changed most is the actual core combat of MechWarrior 5. Instead of hopping in a ‘Mech that you pilot yourself, you send commands to your lance to tell them how to fight. Which can be a little tricky as MechWarrior 5’s AI is still pretty bad and MechCommander Mercenaries is still in early beta and hasn’t quite figured out how to iron out the AI pathing issues.

But the rest of MechWarrior 5 is mostly the same. You still have the same ‘Mechlab, the same mission selection screen, the same map, the same interior dropship walkabout, and the same salvage and mission complete screen. The only real difference is that you’re not the one strapped into a neurohelmet.

Sorry, there’s another big change. As Sean Lang reveals in a recent No Guts, No Galaxy podcast, MechCommander Mercenaries also adds a slow-mo button so that you can slow down the action and send quick commands to your units even in the heat of combat. This is probably a necessary addition as MechWarrior 5 can be surprisingly quick when the AI is the one doing all the shooting.

Installation is simple: just unzip MechCommander Mercenaries in the MechWarrior 5 mods folder and select the mod from the in-game menu. Everything should work fine with other mods (barring a few notable exceptions like the better lancemate mod), but the development team hasn’t tested MechCommander Mercenaries extensively enough to know if it works with 100% of the available mods out there.

I have some fond memories of MechCommander Gold. Not fond enough to replay the game (and it’s most recent update) as much as Sean Lang, but still, fond memories. MechCommander is as beloved around these parts as the MechWarrior franchise, so seeing it return in this way is a truly heartwarming sight.

UPDATE: You can also get MechCommander Mercenaries from the newly enacted mods feature on the Epic Games Store. Just go here, click “add to library,” and MechCommander Mercs will be automatically installed to MechWarrior 5‘s mods folder. Then you just select the mod from the in-game menu and you’re off!

3 thoughts on “MechCommander Returns As a MechWarrior 5 Mod”