I used to be a gamer. A giant collector of big robot games be it Cybernator on Super Nintendo through Chromehounds during the early years of the XBox 360. And of course the MechWarrior and MechCommander PC games. These days I’m busy and on the move, so portable games have been a go-to theme with me in looking for reportable articles.

Two weeks ago a teaser trailer was posted to the Droidgamers website for an beat-um-blast-em game called Mechs vs. Aliens.  It looks like it was just released.  If you like games like Super Smash Bros, it looks like team Turnout Ventures had that in mind when producing the game. 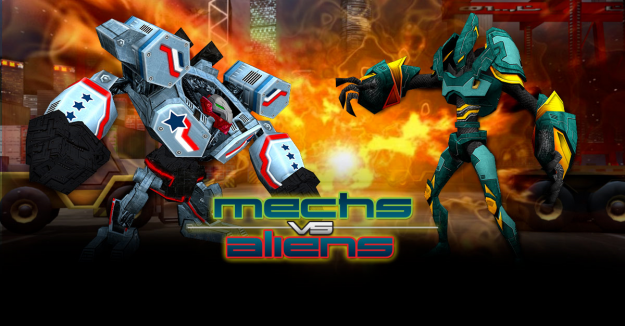 I think the ‘hero’ mech, that is the one featured most prominently in the feature is fairly reminiscent of the Baboon clan ‘mech, and seems to share the Baboon’s missile loadout. There really isn’t much else on the game at the moment. Not even a release date yet. But you can follow on Facebook.

Looks like a decent tablet game. Stay tuned for a review.