Yeah yeah, I know February’s news technically got out on March 1st. I forgot it was a short month–sue me. Anyhow, to prevent that issue from happening again (not that it would since there are 31 days in March) I’m getting a few quick hits out that y’all should really know about. Especially this Catalyst sale over on DriveThruRPG. So let’s hop to it!

DriveThruRPG Is Having A Huge Sale On BattleTech Stuff

First off, there’s a big sale going on over at DriveThruRPG. Our good friends over at Renegade HPG tipped us off via Twitter, and you can follow the link above to give him a small commission too.

Lots of stuff are up to 40% off thanks to DriveThruRPG’s GM’s Day Sale, from now until March 15, although we’re really only concerned with the BattleTech stuff. Here, you’ll find great deals on PDF products, but it looks like the print-on-demand stuff is still full price, so if you desperately need to murder trees to experience the fullness of giant stompy robots, then prepare to pay full price. 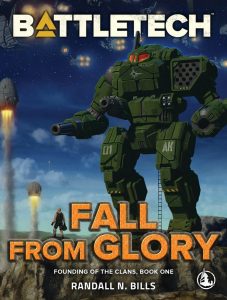 But the rest of us that don’t mind losing a little sleep due to all that screen time, then you can pick up some BattleTech sourcebooks on the cheap. Both Historial Operation Klondike and The Wars Of Reaving are 40% off, and you can get some of Clan Recognition Guides for a reduced price (but not 40%–that’s for the real sourcebooks).

In other Catalyst news, I just got the email that Fall From Glory, Randall N. Bill’s first new novel in the Founding of the Clans series, will be available to Clan Invasion Kickstarter backers in the coming days. Everyone else will have to wait two weeks for the novel to go print-on-demand.

I still need to get caught up on Hour of the Wolf, so Randall might have to wait a bit for me.

It wouldn’t be a news update without new art. This one comes from Reddit user SU-SMD showcasing their design of the Grizzly. It’s great, and seems to showcase some Rasalhague livery–perhaps following their integration into the Rasalhague Dominion?

It’s a shame you don’t really see these ‘Mechs anywhere these days. A great throwback to Ghost Bear’s Legacy. 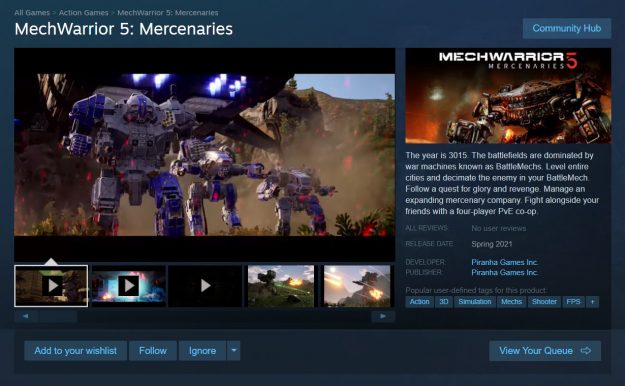 So remember when PGI said that MechWarrior 5: Mercenaries would release on Steam later this spring simultaneously with an Xbox release? Well, the Steam page for MechWarrior 5 just went live, so that must mean something. Right?

You can’t actually buy the game yet–only wishlist it. This usually means that there’s a release date coming soon, since why bother making a Steam page if you didn’t actually plan on selling the game in the relatively near future?

There’s nothing on the Steam page that we didn’t already know from various teasers, dev vlogs, and blog updates that PGI has published in the past. There’s also nothing on the MW5 website to give us an idea when MechWarrior 5 will go live on Steam as so many of us have been waiting for. All we can say with confidence for now is “soon.”

There is one thing: the MechWarrior Online Twitter account recently published this photo that seems to showcase a new menu screen for MechWarrior 5. So that’s cool.

Would it be weird to say we are already working on new @Razer related content for #MWO and #MW5Mercs with you guys? pic.twitter.com/qX2dakwRSE

Alright, that’s all I got for now. We’ll circle back later to see how this MechWarrior 5 business shakes out.