MechWarrior 5: Mercenaries has arrived! I’ve actually been playing it for a week now and I have some thoughts. It’s a solid return to classic MechWarrior gameplay and one that I think most of us here at Sarna will be happy with. I haven’t finished the campaign as I’m in no rush to run through all the story missions, but I’ve certainly played enough to get a general impression of the game.

Before I begin, I have a confession to make. I was honestly not all that excited about MechWarrior 5 when it was announced some time ago. MechWarrior Online had left a very bad taste in my mouth after years of being a loyal fan. There were many reasons why I came to hate MechWarrior Online, but I’ll boil it down to the fact that it was just a bad deal. It asked for way more of my time and money than it gave back in terms of enjoyment, and no amount of me being a BattleTech fan was enough to even the scales.

I quit MechWarrior Online about 2 years ago and haven’t looked back–even after PGI started practically giving away ‘Mechs in sales. So when I heard they were making MechWarrior 5, I had pretty low expectations. When I went to Mech_Con 2018 and got to play a very early pre-alpha build, I still wasn’t very excited.

Flash forward to December of 2019 and I have to say, I am pleasantly surprised.

It’s not bad. In fact, MechWarrior 5 is actually pretty good. I haven’t experienced any of the technical glitches that always marred my MechWarrior Online experience, and the overall gameplay is a delightful return to simple, solitary, giant stompy robot action.

A Return To Form 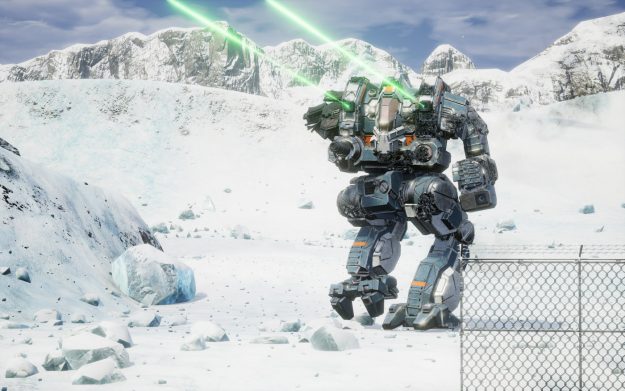 For those of you who haven’t played a MechWarrior game since MechWarrior 4, this game is exactly what you’ve wanted for 15 years. Perhaps moreso; MechWarrior 5 improves on the Mercenaries model that began in MechWarrior 2: Mercs with procedurally generated maps and enemies, available co-op play, and a whole freakin’ Inner Sphere to explore. That’s right–it’s all there. Every major House and most of its planets, just a JumpShip hop away. That’s pretty incredible all on its own.

The core gameplay of performing missions in ‘Mechs is pretty much the same as you remember from MechWarrior 4, only everything is improved. Graphics quality is good, although hardly on the bleeding edge of possibility with modern hardware. I don’t begrudge PGI this–they’re still an indie studio with a small team, and with that attitude in mind, what they accomplished in MW5 is even more noteworthy.

What you’ll really find to be vastly improved over previous games are the destruction effects. For the first time, you can take your 50-ton Centurion and walk that fucker straight through a building. It’s just how you always imagined it after reading all those novels. 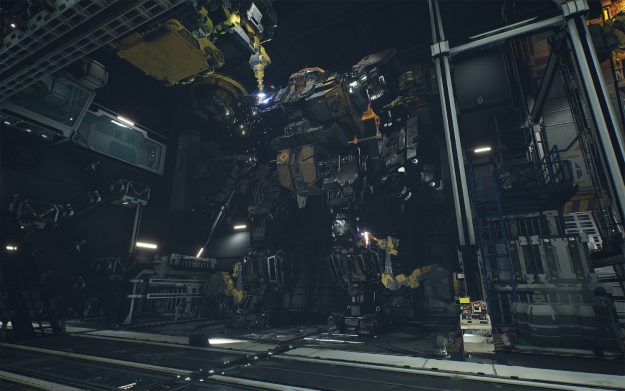 If you’ve played (or are still playing) Hairbrained’s BATTLETECH, you’ll find MechWarrior 5’s ‘MechLab has a lot in common. It’s the same general layout that bears resemblance to the classic paper schematics, but with fixed hardpoints. It also has a different view mode that drastically simplifies customization by just showing the weapons systems. That’s a great option for new or younger players that might not have the BattleTech background and just want to tip their toes into ‘Mech customization without feeling too overwhelmed.

You can’t mess with the engine, but I think that just improves the authenticity of the overall experience. It means that you can’t turn a Panther into a Jenner and vice versa. It means that each design will always feel unique and there will always be a reason to want a Shadow Hawk over a Centurion if you value speed. Also, overhauling a ‘Mech’s engine was always supposed to be an incredibly complicated (and costly) procedure that put it out of reach of your average merc company.

Much like in BATTLETECH, MechWarrior 5 uses a similar tiered equipment system with four pips being the best and zero pips being the worst. This is also represented in the weapon’s stats, which you’ll be able to view in both the ‘MechLab and the open market. You’ll find the usual assortment of weapons from the year 3015, but you’ll also occasionally see some Lostech stuff like ER PPCs, Pulse Lasers, and Gauss Rifles. 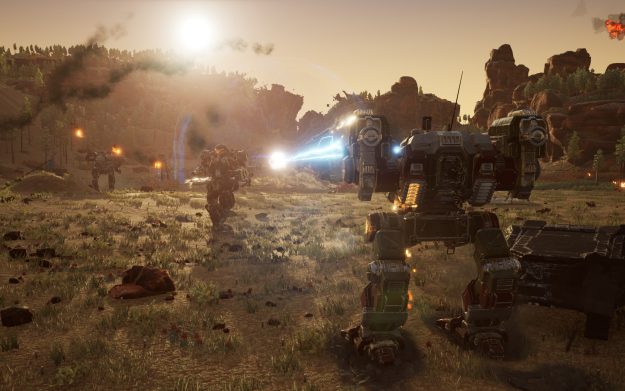 I’m of a mixed opinion here. On the one hand, that ER PPC was EXTREMELY expensive–prohibitively so at the point in the game where I saw it on the market, so this does a good job of making it clear this stuff is supposed to be extremely rare. On the other hand, the lore makes Lostech out to be something of legend and myth at this point in BattleTech’s history and not something you just see on the open market with a huge sticker price.

Overall, I think MechWarrior 5 walks a fine line between appealing to BattleTech lore buffs and appealing to MechWarrior fans that might not care too much about why their Marauder has a pair of ER PPC’s long before the Clan Invasion.

One thing I really like is the new variants of Autocannons and LRMs. You can get burst-fire or single-shot Autocannons, depending on whether you want to feel like you’re firing a machine gun or a tank cannon. You can also get regular LRMs or stream-fire LRMs, depending on whether you want all your missiles to come out at once or to be sent out a bit staggered. There are advantages and disadvantages to both and it allows a little bit more customization than MechWarrior games have otherwise allowed. It’s a nice touch.

That’s Great, But What About The ‘Mechs? 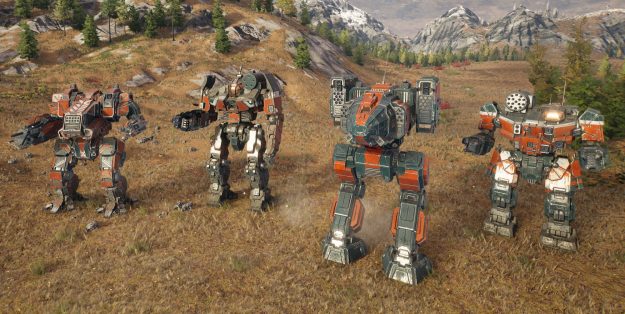 My early-release version of MechWarrior has a fairly limited number of ‘Mechs to purchase in the early part of the campaign, but I’ve been told that will change by the time MechWarrior 5 releases. From what I’ve seen, the ‘Mechs you fight are generally appropriate to whoever it is you’re fighting: Davion units will send in Javelins and the occasional Commando, while Kurita units send in Panthers and Jenners. Mercs will have Locusts and UrbanMechs, and everyone gets a ton of J. Edgar hovertanks and SRM Carriers.

And while we’re on the topic of units, here’s the full list of ‘Mechs in MechWarrior 5. Because I know that’s all anyone really wanted to know anyhow. Note that there are multiple variants for each ‘Mech, so consider this list expanded to be roughly three times as large when you include all the lesser-known models.

A few notable designs: the Nightstar was supposed to be extremely rare even during the old Star League era, so finding it on a list of ‘Mechs in 3015 is a surprise. Ditto the Raven, which didn’t even exist until 3024, as well as the Wolfhound, which didn’t exist until 3028. I suspect players won’t see these designs much during the campaign. I certainly haven’t.

Everything else looks pretty standard fare, but with the extremely welcome addition of Unseen designs. Welcome back, you beautiful bastards.

Light On Story, Unless You Look For It 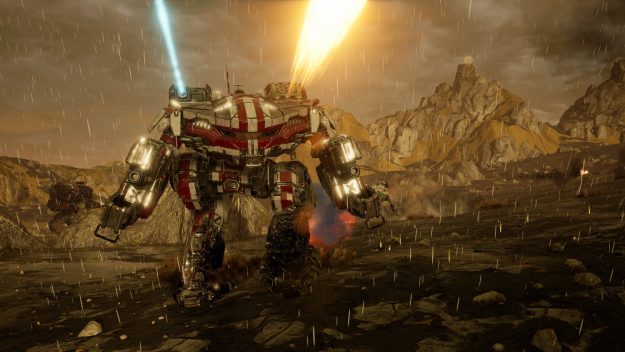 In terms of plot, the game itself tells a relatively simple story: mysterious bandits kill your dad, you take over his mercenary company to build it into a fighting force that can track down those bandits and exact revenge. If you want more than that, Randall N. Bills has written up a prelude novella that really fleshes out the characters and their motivations. For those of you that look for that sort of thing in your single-player games, I highly recommend reading them. Otherwise you’ll find the characters in the game act a little… stiff. And I don’t say that just because they don’t really move during the first-person ‘MechBay scenes.

Okay, that’s not true. I say that because the folks living in your Leopard-class dropship literally don’t move the entire time you play the game. It’s a small thing, but my gosh, it would go a long way to making those first-person dropship scenes feel a little more like you’re in a real space ship and not just some room with a bunch of robot-shaped statues and a few marionettes.

But that’s my biggest complaint, honestly. MechWarrior 5 is an action game meant to appeal to action game fans–it’s not going to bog a player down with complicated plots or characters with a lot of expository dialog.

I haven’t encountered any in-universe events in the game so far, but I think that was by design. They chose the year 3015 so that there’d be plenty of time between when the game starts and the next big event, which would be the Fourth Succession War of 3028.

But Overall, The Best MechWarrior Game Yet 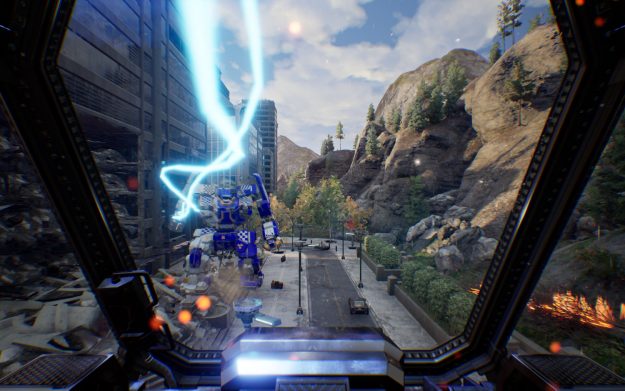 I’ve mentioned BATTLETECH a few times and I think it’s important to address the fact that I don’t think there’s much point in comparing it to MechWarrior 5. They’re both completely different games that are providing a completely different experience. BATTLETECH is more narratively driven with character development and lore, whereas MechWarrior 5 is a more visceral action experience. I would even go so far as to describe the player character as a “dude-bro” just based on his in-game dialog.

BATTLETECH has also been out for over a year with several DLC expansions under its belt, and while MechWarrior 5 is definitely a complete game, it’s still not fair to compare technical aspects of these games either. MechWarrior 5 will almost certainly improve after its release in the same way that BATTLETECH did, and although I haven’t heard much discussion surrounding DLC, I wouldn’t be surprised to see something announced in 2020.

MechWarrior 5: Mercenaries is the surprising sequel to MechWarrior Online that surprises not just for being a quality game, but also for recapturing the single-player MechWarrior experience. It doesn’t get everything perfect and I’m sure there will be loads of complaints from other players over time, but I can safely provide my seal of approval. If you were a fan of MechWarrior 4 and wish someone would make a new one, then MechWarrior 5 is exactly that.

Actually, it’s not just that. MechWarrior 5 also has all the improvements in gameplay that have accumulated over the past 15 years, so it’s actually better. I haven’t even done the co-op campaign yet, which I’m really looking forward to.

I know some of you are still kinda upset about the whole Epic exclusive thing. If that’s the case, then you can wait for it to release on Steam in 12 months. By then, whatever bugs were present (and my experience thus far has been bug-free) will have been ironed out and there might even be some additional content. But if you don’t mind another launcher, then you can pick up MechWarrior 5 now for $49.99.

21 thoughts on “MechWarrior 5: Mercenaries Has Arrived – Here’s What You Can Expect”