The double-elimination tournament may be over, and we may know which teams could be this year’s World Champions, but that doesn’t mean we’re done with competitive ‘Mech action! Not by a long shot.

In preparation for the three team’s final showdown in Vancouver later in December, PGI scheduled two seeding games last Saturday to determine the order by which the teams will play. The third place 228th Black Watch took on second place EON Synergy, and the winner of that game played against first-place EmpyreaL.

As pointed out by BanditB17 during the Twitch cast, the matches are largely exhibition games, but the stakes are certainly real as all three teams will be able to scout out their opponents to discover what tactics they’ll have to defeat at the world finals. With Mechwarrior Online recently receiving a balance patch as well, it gives all teams a chance to determine if their customized rides are still tournament worthy. 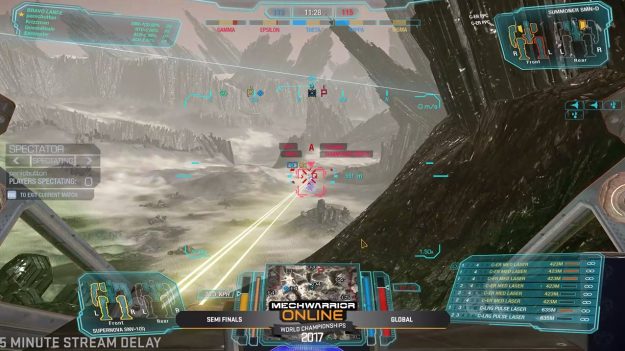 Each game was best of three, with the first battle between 228th Black Watch and EON Synergy taking place on Tourmaline Desert, a map notorious for overheating ‘Mechs. Right off the bat, a 228th lance composed of Assassins and Arctic Cheetahs rushed forward to sneak beneath a ravine and pounce upon an unsuspecting EON Summoner. For a moment it looked like they’d get the quick kill, but EON responded by diverting heavier elements to thwart the assassination attempt. The light lance melted back to take resource point Theta and then hide amongst the terrain.

A bout of long-range fire began as both teams formed firing lines, with 228th maneuvering EON Synergy into a corner of the map. As they retreated an EON Summoner got caught out in the open and was nearly taken down, while EON responded with airstrikes that wounded the 228th’s own Summoners. However, EON had ceded most of the map by this point and allowed the 228th to acquire all but one resource point. EON was in danger of losing the round if they didn’t respond soon. 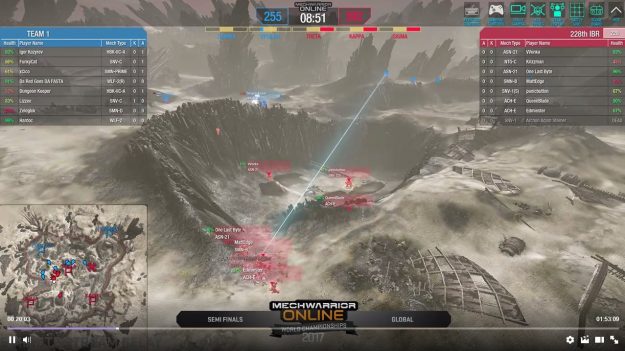 And respond EON Synergy did, pushing down the west side of the map to take a 228th Supernova by surprise. The 228th then seemed to panic, with the whole team turning west but dropping into a crater along the way. That crater turned into a death trap as EON ‘Mechs were able to pummel the 228th from the crater’s rim, taking out another pair of enemy ‘Mechs. Down by three chassis, 228th couldn’t survive the ensuing brawl. First drop to EON Synergy.

The second drop was played on Canyon Network, and was comparatively much less exciting. Both teams took to the ridges and mesas to set up firing lines. EON Synergy kept firing while 228th kept retreating from EON’s lasers and ER PPCs. The 228th did manage to have their lighter elements take out an EON Hunchback IIC and Supernova, but lost a pair of ‘Mechs of their own. The 228th machines then started to reach their combat loss grouping after a pair of deadly air strikes, falling like dominoes until EON Synergy emerged victoriously. 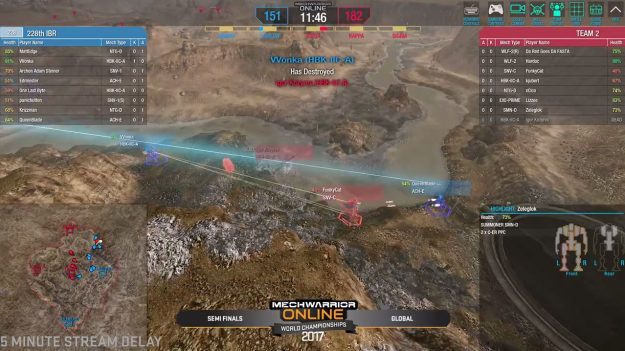 EON then went on to fight EmpyreaL for the second game of the night. Just like last year, EmpyreaL has taken the tournament by storm and has yet to lose a single game. This would be a vital opportunity for EON Synergy to search out a chink in the EmpyreaL juggernaut’s armor.

EmpyreaL wasn’t about to make the task easy for them.

The first drop once again played out on Canyon Network, with EmpyreaL bringing an eclectic mix of ‘Mechs to battle. A pair of light machine gun toting Mist Lynxes for lights along with a rarely seen Warhawk Prime dropped with their signature Streak SRM Huntsman, providing EON with some unusual targets to deal with. 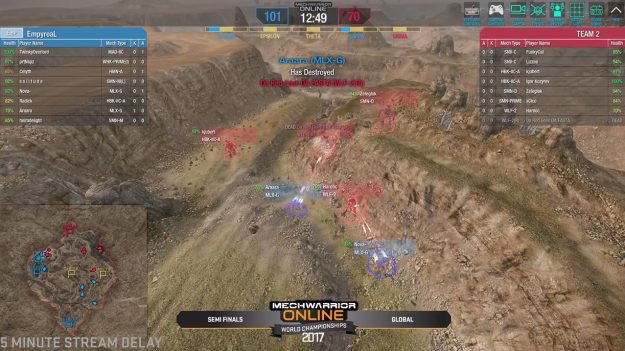 Unfortunately for EON Synergy, they didn’t seem to learn how to deal with those targets fast enough, as the Mist Lynxes and Huntsman pushed the west side of the map to ambush their Wolfhounds. Empyreal lost their Streak-Huntsman in the exchange, but by then the Mist Lynxes were able to start punishing EON’s heavier elements with impunity, tearing through their lines like buzzsaw wielding maniacs. As EON ‘Mechs began to fall the heavier EmpyreaL elements closed in to mop up the survivors, proving that light ‘Mechs can be deadly combatants if left unchecked.

Drop two had the same mix of units for both sides, but EmpyreaL swapped their Warhawk for an Ultra AC/2 boating Mauler for the hotter climate of Tourmaline Desert. At first, EmpyreaL seemed to lose out on the usual exchange of long-range fire, but it all turned out to be part of EmpyreaL’s larger strategy to exchange armor for map control. EmpyreaL’s lighter elements took the central resource point giving them 3 of the 5 available. Then they simply waited as their points began to stack up, forcing EON Synergy to attack. 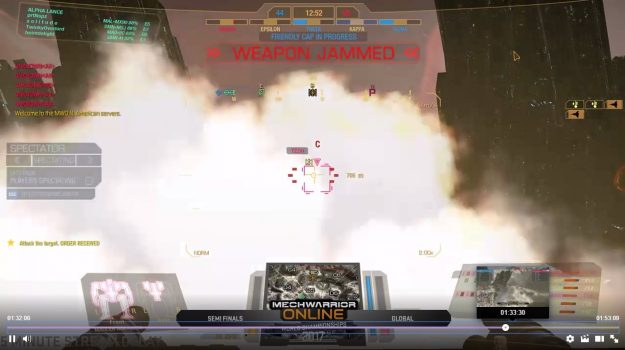 Attack they did, but EmpyreaL had taken defensive positions and prepared for the oncoming assault. After the EON rush, EmpyreaL picked up three quick kills and forced them to retreat. Unfortunately for EON, by then the resource tickets had already gotten above 700, giving them mere seconds to defeat all remaining EmpyreaL forces – a simply impossible task, given the skill of EmpyreaL’s pilots. Once again, EmpyreaL remains undefeated in World Championship games.

With EmpyreaL remaining in top form, EON Synergy and 228th will have a rematch of their latest encounter for the first game of the World Championship Finals. The winner of that game will move on to meet EmpyreaL, and by that point they had better have prepared for the onslaught of the toughest team around.

Tune in next time for our direct coverage of the Mechwarrior Online World Championship coming to you from beautiful downtown Vancouver, Canada as Empyreal defends their title.