It’s been another wild weekend for the Mechwarrior Online World Championship, with both the second and third round of matches having taken place in a whirlwind series of matches that pilots from all over the world battling it out at all hours of the day and night. Our resident Twitch casters must be having a rough Monday since they clearly didn’t get enough sleep last weekend. And who would with such an amazing number of games played between the best Mechwarriors in the world?

Let’s once again recap the weekend’s results and see which top three teams will be flown out to Vancouver to take part in the World Championship Finals.

The first match of the winner’s bracket brings the 228th Black Watch against EON Synergy, the top European team from last year’s championship. In the first game on Canyon Network, Black Watch tried to push through the map’s namesake canyon but lost a ‘Mech to an EON ambush. The early ‘Mech loss snowballed into a blowout, resulting in EON taking the game with 6 machines remaining. In their second game the 228th performed better, maneuvering EON into an ambush themselves on Tourmaline Desert by sending a fast group of Assassins and Arctic Cheetahs to bait EON into the open and picking them apart piecemeal. 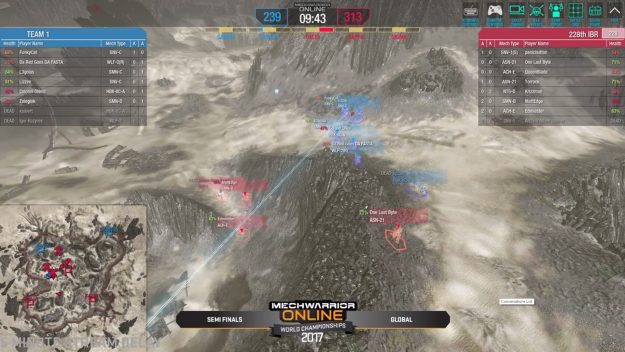 The third game was a brutal display of skill with EON eventually having three heavily damaged ‘Mechs to Black Watch’s two. It was a nail-biting several minutes as Black Watch went for a resource capture win, eventually emerging victorious with 750 points to 734. Black Watch won the match 2 games to 1 and moved on to face the winner of the Osiriz versus EmpyreaL match.

EmpyreaL had a fairly lackluster first showing against Phoenix Legion last week, coming out the winner but not showing their normal crushing display of power. That all changed when they fought Osiriz on Saturday. EmpyreaL took no prisoners, demolishing Osiriz in both games. Of particular note was an EmpyreaL Huntsman loaded with Streak Missiles that managed to use them to great effect against the Osiriz Wolfhounds. After eliminating their light ‘Mechs in both games, EmpyreaL then was able to outmaneuver and outshoot Osiriz, taking both games without losing a single pilot.

If there was any doubt last weekend as to EmpyreaL’s chances in this tournament it was silenced with this match. EmpyreaL was back, and they are terrifying.

Next up was the Steel Jaguars versus 228th The Wild Ones in a series of close games that showcased both team’s finesse as Mechwarriors. The first game was notable for having a series of airstrikes that totally changed the balance of power, first with a blind SJR strike eliminating a Wild Ones ‘Mech, and then with both teams launching strikes into a melee that saw each team lose pilots. When the dust settled it was down to a 5v5, with the Wild Ones just managing to come ahead in the ensuing firefight. 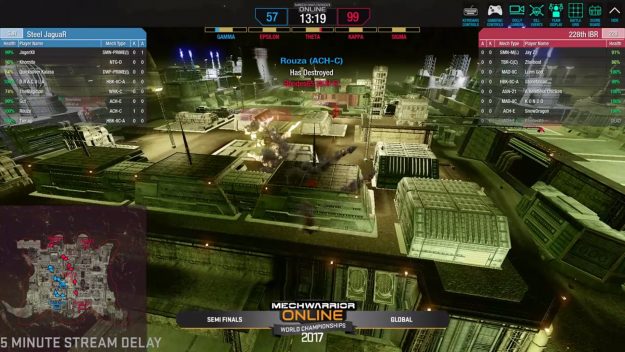 However, The Wild Ones would drop a heartbreaking second game. After controlling four out of five resource points for much of the game, SJR engaged in a series of firefights that would eventually leave all but one Wild Ones light ‘Mech left and only a few seconds before achieving a resource victory. But SJR managed to catch him in time and secure the win for their second game. By the third game The Wild Ones seemed to lose steam, swinging right into a firing line of SJR ‘Mechs only to be completely annihilated. The Wild Ones head home after their second loss, and SJR proceed to the next round.

The next match brought EmpyreaL and 228th Black Watch together in a clash of titans that could be a preview of the finals to take place in December. The first game began as a gentlemanly exchange of long-range fire until EmpyreaL pounced on a pair of Black Watch Hunchback IICs, quickly eliminating them and an Arctic Cheetah that came to assist. With three ‘Mechs down EmpyreaL was easily able to wipe out the remaining Black Watch machines with little effort. 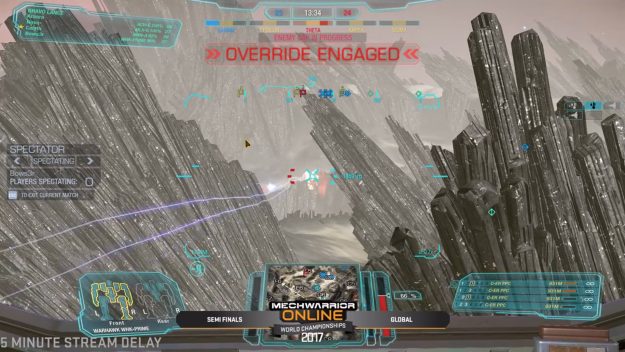 EmpyreaL then showed their ability to brawl in the second game, converging on a Black Watch lance in the middle of Tourmaline and coming out way ahead in the close quarters combat, taking the game without a single loss. Once again EmpyreaL shows their incredible talent against one of the best teams in the world, sweeping Black Watch in two brief games.

The Steel Jaguars were hoping to keep their tournament dreams alive as their next game brought them against the European regional champions, EON Synergy. In their first game it seemed like luck was on their side as after losing a series of long-range trades SJR managed to eliminate an EON Hunchback IIC, giving them the early lead. But EON responded in kind by eliminating an SJR Hunchback with their roaming Wolfhounds. Several good critical hits then put EON Synergy ahead, who were able to then eliminate the SJR side with only a few losses of their own. 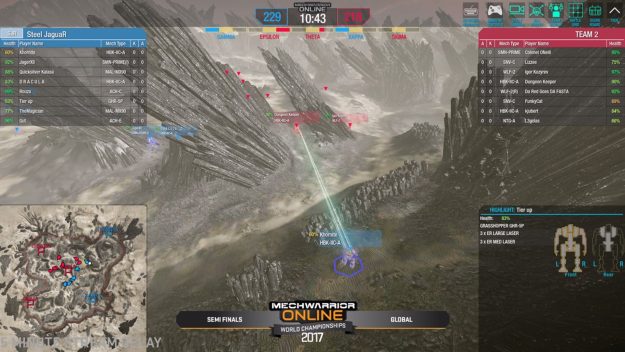 In their second game SJR seemed to push very strongly at the beginning but EON saw the power play and pulled back before they could receive any strong hits. From there SJR seemed to go for a resource capture strategy but then again pushed hard right into the EON Synergy lines. However, this time EON was well prepared and met the SJR push with a withering fusillade that took out the entire opposing force. With their second loss SJR was eliminated from the tournament.

Unfortunately the Osiriz versus RJFS match was played at the same time as EON Synergy versus SJR, so I wasn’t able to view both matches. However, I was able to watch a replay, and the first game was a very steady progression of long-range fire turning to short range brawling, with both sides losing armor by the ton. Finally one Osiriz light ‘Mech snuck into the RJFS lines and began to take down machines left and right, leading to Osiriz taking the game. 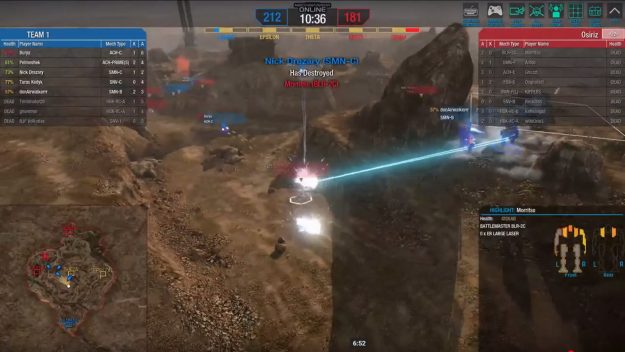 The second game went in favor of the Russian Jade Falcons in a horrific brawl that saw both sides take massive losses. The third game on Polar Highlands, a very rare map to see, went in favor of the Russians as they pushed into Osiriz early on with the Osiriz warriors responding sluggishly, losing machines along the way. The remaining Osiriz Summoner succeeded in robbing RJFS of their final kill by running out of bounds committing the Mechwarrior Online equivalent of seppuku.

Ultimately Osiriz were sent home after a series of tough games leading to Eon Synergy and RJFS meeting for the second time in the tournament. Eon Synergy took their first meeting, but the Russian Jade Falcons put up a hell of a fight. Will they manage to defeat their rivals in the second match up?

Airstrikes and long range fire defined the first few minutes of their first game, with EON Synergy coming ahead and eventually savaging two RJFS lights. As has been shown so many times in the tournament the loss of your light ‘Mechs early on can be disastrous as it allows your opponent to outmaneuver you while denying any ability to respond. 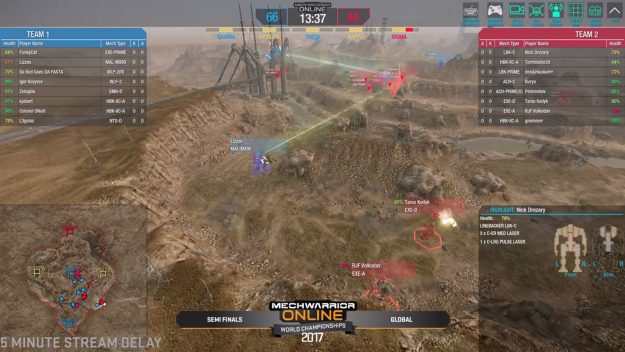 EON took the first game easily, but the second game wouldn’t be so simple. RJFS changed tactics, bringing an aggressive lance of Linebackers and Executioners to quickly ram into EON and force a firefight. At first it seemed to work, getting four quick kills for only two losses of their own, but the tide then turned in favor of EON Synergy as the armor of the RJFS machines began to fail. With the final RJFS ‘Mech falling they were eliminated from the tournament losing once again to EON Synergy.

With the elimination of RJFS, we have our remaining three teams to meet in Vancouver at the World Finals: EON Synergy, 228th Black Watch, and EmpyreaL. Two of these teams are veteran World Finals contenders, while Black Watch are making their first appearance on the world stage. But will either team have the strength to overcome EmpyreaL, who seems to have once again become the unstoppable juggernaut they were in the previous tournament?

Find out at the Mechwarrior Online World Championships this December 9th in beautiful downtown Vancouver Canada, where your very own Sarna reporter will tweet you the live play-by-play.