The weekend has come and gone, and that means we’ve had our first round of matches for the MechWarrior Online World Championships. There’ve already been a few teams eliminated from this double-elimination tournament, with other teams proving their mettle against a field of truly awesome contenders. Let’s take a look at the standings after a weekend of ‘Mech action.

Our first match actually took place September 17th between Russian Jade Falcon/Spikes and 228th Wild Ones due to a bit of a scheduling hiccup, but there were certainly no hiccups in the match. The Wild Ones managed to take an early lead in the best of three games, taking out 2 RJFS ‘Mechs which allowed them to wrap-up the rest of the match easily. However, RJFS rallied and took the remaining two games in a brutal display of gunnery, eliminating the majority of The Wild Ones’ machines and giving them the victory. 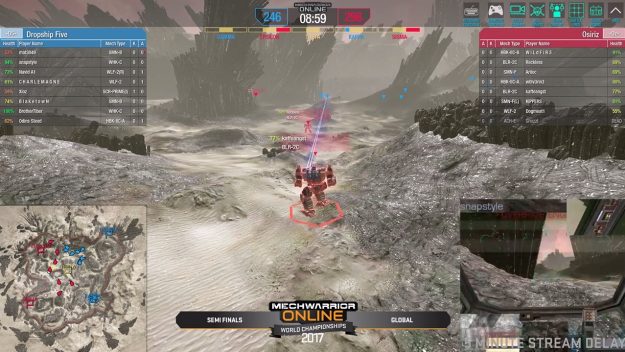 Last Saturday brought several games to Twitch, starting with Dropship 5 against Osiriz. This match went to its full three games with the first round a brutal battle of attrition. PPCs and laser fire lit up the map as each side traded long distance fire. Ultimately Osiriz managed to take the first game, but just barely, with the second game going to Dropship 5 by an equally slim margin on resource points. In the final round Dropship 5 once again tried to go for a resource win but fell prey to some clever maneuvering from Osiriz that managed to split the Dropship 5 forces and gang up on half of them before the other half could respond, giving Osiriz the victory.

Next we have White Death Mercenary Company against the Phoenix Legion which immediately devolved into an insane brawl on HPG Manifold. Lasers, missiles, and autocannons lit up outer space as each team ran into close quarters combat. Air strikes from both teams continually pounded the melee, getting friendly and enemy kills alike, but the Phoenix Legion strikes proved to be better aimed as they swung the first game from a 6v4 to a 3v4 in one swoop of an Aerospace fighter‘s tail. The Legion also took the second game as well, but it may have been a pyrrhic victory as this put the Legion against last year’s Champions for their next round: EmpyreaL. 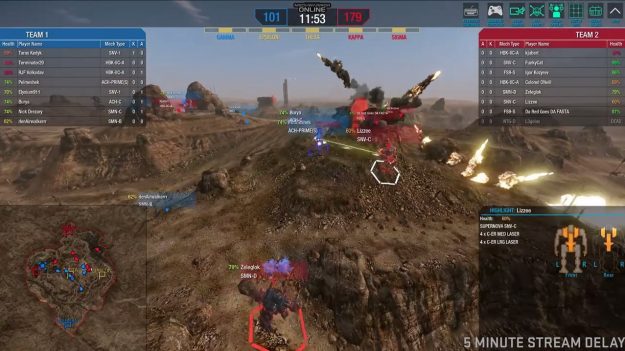 Next, we have last year’s European Champions EON Synergy against RJFS for their second round of fights and the second round of matches for the tournament overall. The Russian Jade Falcons managed to take the first game quite soundly, but EON came back strong in the final two fights giving RJFS their first loss of the tournament. One more loss and RJFS will be heading home empty-handed at this year’s World Championships.

The Black Watch continued their winning streak in their next game against The First Jaguar Guards but not before having a trio of prolonged fights against the Jaguars. The Canyon battleground was once again covered in laser and PPC fire as both teams fielded two lances of Supernovas, Night Gyrs, and Hunchback IICs, so no argument could be made that either side had a technological advantage. The superior piloting of the Black Watch pilots proved telling, allowing them to emerge victorious after three games. 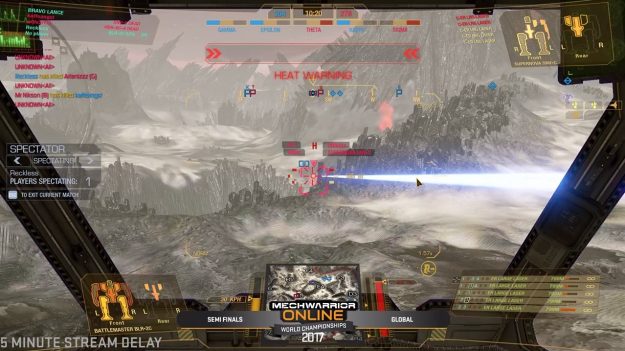 Just yesterday gave us our first match featuring the Tikonov Commonality Armed Forces against Osiriz for their second match of the tournament. At first it seemed TCAF may be able to take the first match, but Osiriz cleverly managed to capture enough resource points so that TCAF was not able to respond in time to prevent a victory. Osiriz also took the second game after several ferocious exchanges of fire, with not a single ‘Mech stumbling from the battlefield without critical damage. Osiriz continues their streak without a single loss. 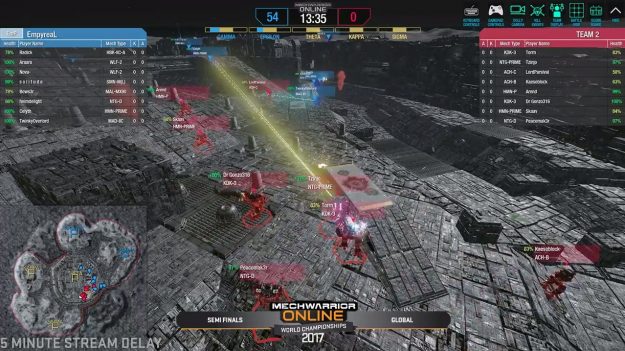 Last year’s World Champs, EmpyreaL, had their first match of the tournament against the loveable underdogs, Phoenix Legion. Phoenix Legion came out swinging, but the tournament veterans played the long game by reserving enough armor to take them into the later stages of the game while Phoenix Legion lost too much stamina to continue. The second match was much slower than the first as both teams went for a capture strategy, but unfortunately Phoenix Legion fell prey to a surprise push by EmpyreaL as they brought their heavy and assault ‘Mechs to the center of the map in a risky move that caught out several lighter Legion machines. After securing an easy three kills EmpyreaL went on to take the win.

Our next game has Dropship 5 fighting for survival against the First Jaguar Guards. Dropship 5 managed to barely hold on to victory in the first game, but couldn’t maintain their grip to win the final two games as the Jaguar Guards rallied and took two decisive victories. This means Dropship 5 is eliminated from the tournament – a surprise ending for the current MRBC North American Division A champions. 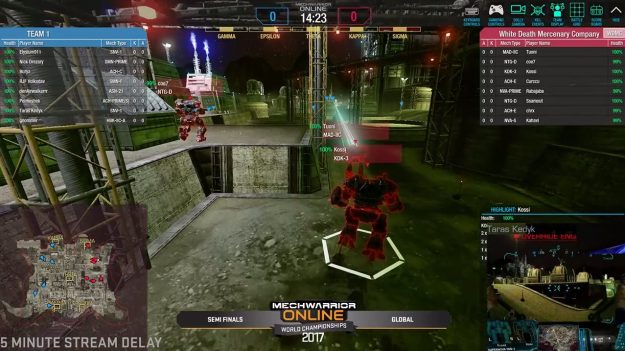 Our last pair of matches only contained losing teams, making them do or die for both combatants. The Wild Ones were looking to redeem themselves against the Phoenix Legion, and they did by taking the match two games to zero. Phoenix Legion employed some interesting strategy that flirted with brilliance at times, and perhaps with some refinement on the off-season, they’ll be able to return next year to make a more successful World Championship run. Kudos to you, Phoenix Legion, and here’s to next year. 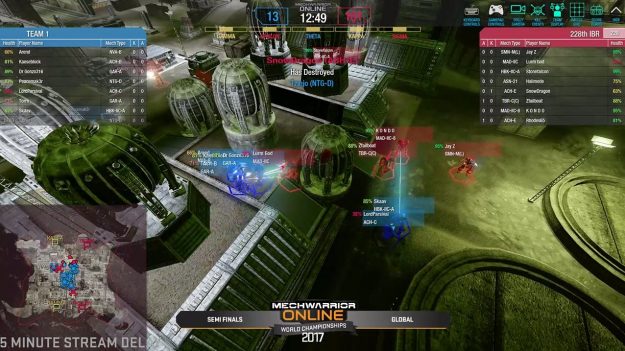 The last match of the weekend pits Steel Jaguars against the Tikonov Commonality Armed Forces. TCAF seemed very timid in their first match, taking air strikes and long-range fire without responding, ultimately handing the Steel Jaguars victory. The second round on HPG Manifold started in a much better position for TCAF, even taking an early kill on a Jaguar Supernova, but then the Jaguars managed to maneuver behind TCAF and start eating into their delicate back armor. After several kills, TCAF’s forces completely fell apart, allowing the Steel Jaguars to move on to the next round. 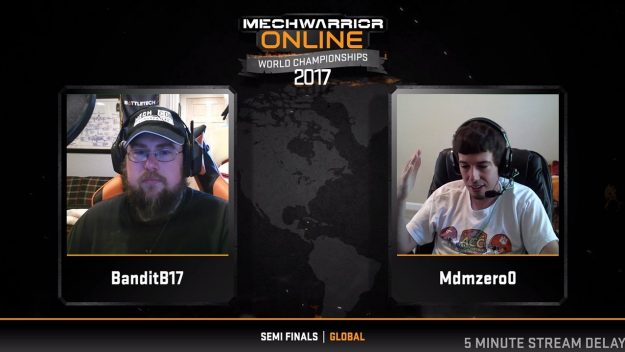 Thus we head into the next round with 10 teams remaining and two matches of undefeated teams that could be a preview of what we’ll find in the final round. The Black Watch and Eon Synergy will compete in a battle of European and North American juggernauts, while EmpyreaL and Osiriz will face off in a match that will end one team’s undefeated streak. Osiriz seems to be the team to watch as they have emerged from the starting round with several commanding wins already under their belt, while EmpyreaL seemed slightly sluggish in their first round against Phoenix Legion.

Meanwhile, it will be another fight for survival in the opposite brackets, as Steel Jaguars face The Wild Ones and RJFS face the First Jaguar Guards. These veteran teams are sure to put on an incredible performance to maintain their place in the World Championship.