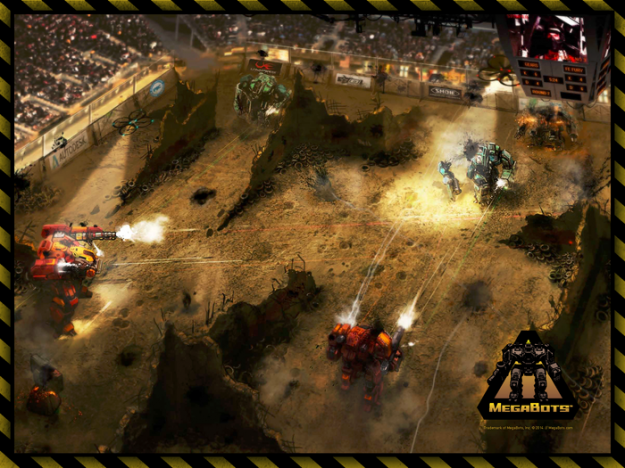 MegaBots, Inc. is a team of more than twenty scientists, engineers, designers, materials fabricators, and more from the film industry, MIT, the defense industry, and with technical and concept art by Alex “Flyingdebris” Iglesias. The kickstarter for the program promises much; a pair of prototype combat robots utilizing projectile and missile weapons, a venue, and presumably a marketing/merchandising campaign to help make Megabots a self-sustaining sport.

Yes, sport. From the video, it looks like they will be using upscaled simulated weapons; from what looks like a large-caliber paintball cannon to a bank of (presumably) pneumatic-powered rockets in either arm. Style-wise, the prototype resembles a Kanazuchi assault battlearmor, with the weapons assortment reminiscent of the Thanatos. Unlike the Kanazuchi, the finished prototype Megabot will weigh in about 15,000lbs- about that of an upper weight class protomech. The Prototype when finished will also be about fifteen feet in height and sport a Dual Cockpit Combat System with a clear delineation between pilot and gunner.

The cockpit is constructed as a heavy-duty roll cage, with two or three access points- ensuring that there will always be a way out in an emergency. The team designed the cockpit to be open enough to allow hits to the cockpit to allow paint splatters inside- allowing for a personal injury simulation just like any paintball game experience. 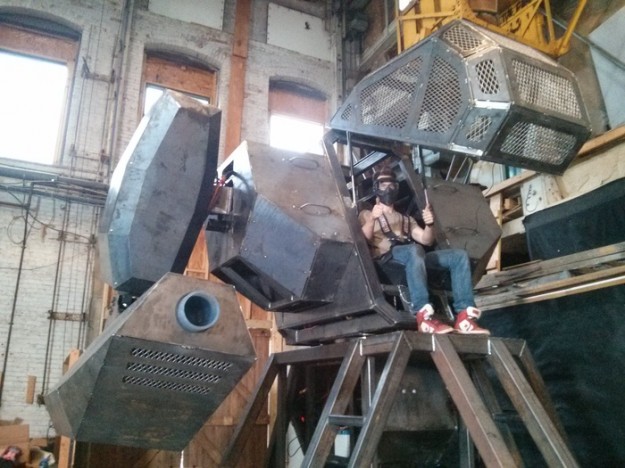 I really hope this works out, but if not they’ll have the best home cockpit rigs EVAR.

There is also a pair of what look like smoke grenade launchers like those modern combat vehicles use to mask their movements and spoof laser-guided munitions. In the Megabots league, they may be used as part of the pyrotechnic effects. A computer program and sensor array in the armor panels will sense hits and blow off armor panels, detach limbs (which will feature modular weapons configurations, and even create a limp in the ‘mech’s drive system. The robots are battery powered, using an electro-hydraulic drive.

They still seem to be working with the most difficult problem endemic in such a system- the legs. Eight tons is a LOT of weight to place on two feet, even if a fancy computer, balance algorithm and gyro system can make it walk correctly. There will be a lot of stress points. That and using batteries means the robots will probably be VERY slow. Fights will look more like the torso-twist-and-pirouette dance contests that made up the assault class bouts from MechWarrior IV Mercenaries.

The nearly two million dollar kickstarter goal includes two prototypes and a venue; which hasn’t been located yet but they’re shooting for a May 2016 opening event. With future funding, different weight classes could open up, along with more game types including capture the flag, king of the hill, and deathmatches. The same sorts of weaponry used in the ‘mechs are even installed in static remote-controlled turrets for the venue. Pretty much everything you might expect to find in a Solaris City main event, except for George Ledoux doing the commentary- and I have a feeling he wouldn’t say no to a gig like that if asked. Especially if he was able to live out his own Duncan Fisher moments in the cockpit.

Megabots is also looking to add members to its team, with the specifics in this video: They’re looking for engineers, fabricators, graphic designers, event video producers to submit a five minute video by Friday, November 7th on why they should be considered.

The engineering, funding, and time constraints look daunting, but optimistically, I for one welcome our new giant robot overlords.

As usual, Time and C-Bills, shall tell.

One thought on “Megabots- Is Solaris VII Coming to Live Action Fruition?”