Anyone old enough to remember Dream Pod Nine’s original Heavy Gear tabletop game back in 1994 most likely also knows the subsequent series of three popular videogames and even a cartoon series. Not quite so well-known is the anime that inspired Heavy Gear: Armored Trooper Votoms or the fifty-two episodes that inspired legions of mecha otaku well as tabletop and video game fans. Lately there has been a lot of talk about the game system, and a new videogame in particular. 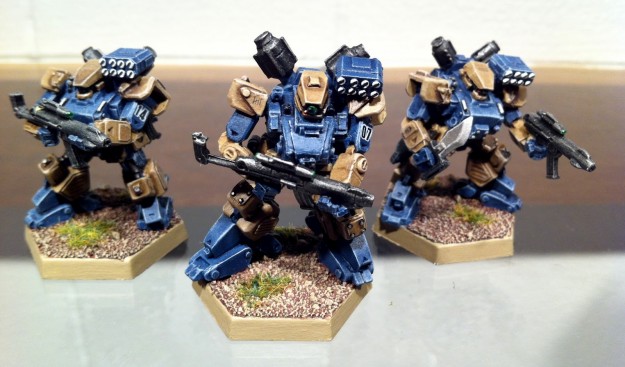 Mektek, the design firm that did so much to bring MechWarrior IV: Mercenaries, has been working diligently developing and marketing both Heavy Gear Assault, have released the Kickstarter to raise the funding for finishing the game. Mektek made the game’s first official presence known at the Game Developers Conference in San Francisco where they displayed promotional videos and a prototype multiplayer version of the game. Here is a video from Gamespot’s coverage of the Game Developers Conference in March. Mektek is also “gearing” up for this year’s E3 appearance. 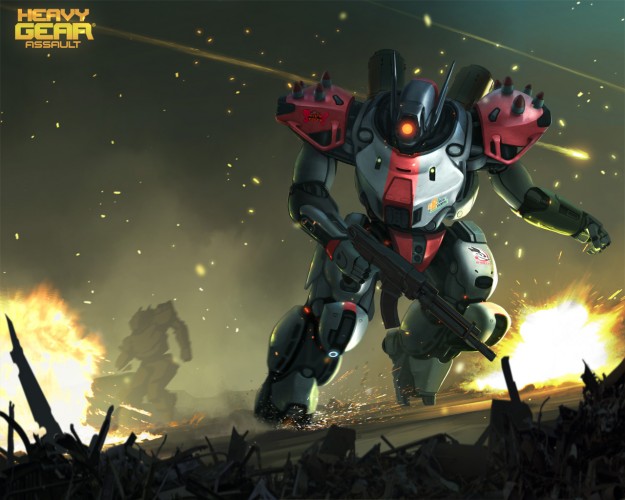 Gears, for those unfamiliar with them, are bipedal combat Mecha about the size of assault class BattleArmor, like the Kanazuchi or Ravager. Rather than jump-jets, Gears use high speed wheeled and tracked drives in the feet for bursts of velocity and to provide a more stable firing platform at speed. Weapons tend to be melee, hand-held ballistic weapons and auxiliary box missile and rocket launchers mounted on the shoulders. The size, look, loadout and operations are also reminiscent of Square Enix’s Front Mission series of games (who were also very much inspired by Votoms.

The tabletop Heavy Gear game as well as the three spinoff videogames by Activision (the games have a very MechWarrior 2 feel) takes place four-thousand years in the future, and tends to focus on the battle between the Northern and Southern unified factions on Terra Nova; a human colony out of contact with Earth for generations. There was also an arena setting identical in idea and operation to the Solaris VII games. This was primarily for some to take advantage of individual pilots’ tendency to conduct one-on-one duels; even in combat. You Kuritans out there know exactly what I’m talking about. The animated series focuses almost entirely on the Arena combat. 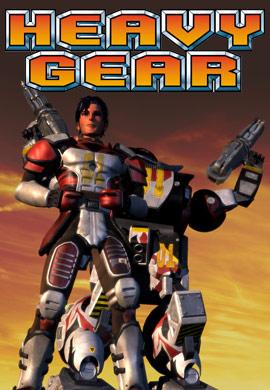 As does Heavy Gear Assault, unfortunately. I say that as a gamer that spends 90% of my time in the combat missions that progress the story along. Sure, The Solaris games are great,  from the various venues to Duncan Fisher’s play by plays. But BattleTech and Heavy Gear both have prided themselves as wargames first. Will I want to play Heavy Gear Assault? You bet your laser gyro I will.

From what I’m reading about the fluff aspects of the game, I like. From it being built on the Unreal IV engine to Gear manufacturers advertisements in-game to heavily destructible environments and equipment. Coming from such a heavy sports angle also opens up possibilities for some creativity. I can imagine “Gear Girl” cheerleaders, personally. At the GDC it was said that spectators could participate in the game by ‘sponsoring’ their favorite top scoring arena champs and other ways of involving people waiting to play or just watching the competition.

I’ve heard there are game company-sponsored leagues where teams compete for cash and prizes. I don’t know if competitor sponsorships will involve real money or how it will be handled, but if it does, I’m trying to imagine virtual online bookies and side gambling taking place on the competitions. Well, there’s online poker. Why not an online mafia?

Who knows, Heavy Gear Assault might end up being more like Solaris VII than even Solaris VII is.