While MegaMekNET and MekWars: Legends are the two most commonly played MekWars servers out there, one of the most unique is MekWars: Forever.  We created an account, loaded it up and played around with the interface a bit to see it up close.

The MekWars clients allow you to play BattleTech online in a ongoing campaign against other people.  You are typically assigned to a faction, like Word of Blake or Free Worlds League and from there you ally with others in your faction against the universe, planning your conquering, assembling your army, and playing against foes using the MegaMek engine. In order to play, all you have to do is download the total file from the MekWars host and load it up.

MekWars: Forever has a different spin than the other servers.  Set in the late 3050’s, instead of you being a part of a large faction, you are a faction of one.  You create your own faction and then are in sole control of it.  With this unique take on MekWars, we had to check out exactly how it worked, so we grabbed the file and loaded it up. 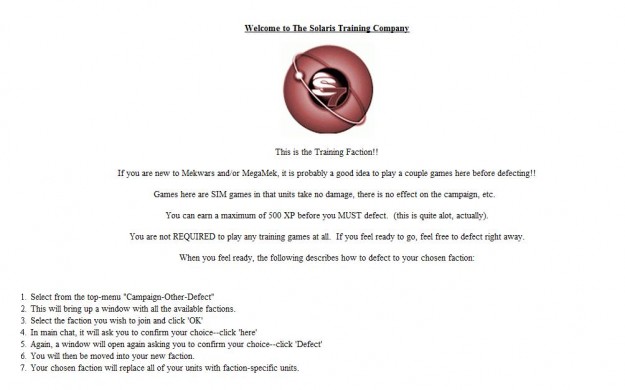 Solaris is for Newbs

You begin in Solaris, but you have the ability to defect immediately and name your new faction.  We did just that and created the Kilts and Commandos mercenary company.  We were randomly assigned a home planet on Elgin.  This is the only planet we control, and it comes with a factory for almost every type of infantry, vehicle, fighter or BattleMech.

After that, we are randomly assigned a Hangar with a few troops in it that reflect our neophyte status.  We have just twelve ‘Mechs, and four tanks.  Of those ‘Mechs, we have just two assaults, four heavies, and three each light and medium.  It’s a pretty small unit to build armies for battle. 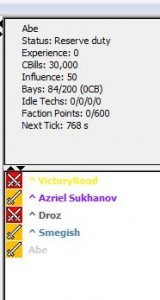 We do start with a lot of fighters though, if that is your interest.  Plus, we begin with 200 bays, which is a lot of space for more units.  You can see our starting information to the left.  Both bay space and C-Bills are quite generous.

Because you control your own faction, you can do fun things like conquer planets, build new factories and research new units to add to your buildtables.  Each of these really helps to flesh out your faction and the universe as a whole.

The first thing I noted when I joined MekWars: Forever is the smaller number of players online.  However, you don’t have to worry about running into a lot of players in your own faction, like you do on another server, so you can play against anyone online, since they are all in different factions.  Also, I noticed that all of the players online had newer accounts and hadn’t played much.  I could get in some games without playing someone who has hundreds of MekWars: Forever games behind them.

Because you stand and fall on your own, there will naturally be some differences.  You don’t have faction mates to share strategy with behind open lines.  No one will look at your potential lance and make suggestions.  Normally you can dump off units you don’t want to fellow factioneers, while also taking some yourself.  That’s not possible here.  It’s live or die, all on your own.

If that sounds awesome to you, then head on over to MekWars: Forever and take a shot at running your own empire.