In late August, MekWars: Legends launched their eighth campaign.  This is a great time to grab the client, and play the game.  Everyone is at the same level of development; that helps to keep things even early on.  Whether you are a new MekWars player or a long time veteran, this is a good opportunity to get in on the action. 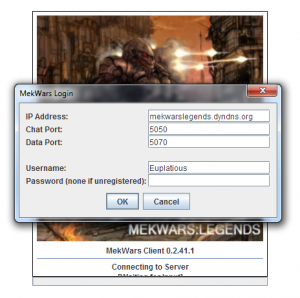 MekWars is a program that enables people to play MegaMek online.  There are several MekWars servers hat bring people together.  You join a faction, track finances, launch attacks, and fight in MegaMek battles.  MekWars: Legends takes place in 3067, and it is one of the most active MekWars servers out there, with a great community.  Since it was formed in 2009, it has launched seven previous campaigns – so it has a new campaign about every six months.

Every so often, a MekWars server reboots, and a new campaign follows.  This often happens when one faction takes out another.  The reboot brings everyone back to the same level.  Since the relaunched server has been up for such a small amount of time, there are a lot of opportunities for a new player to make an impact and not feel overwhelmed by longtime vets.

Check out our post about the server for a quick look at it.  Then head on over to the forums at MekWars: Legends for more info.