Once upon a time I did own a home console; a PS2 and Xbox 360 to be exact. And being a mecha maniac, it was all about games like Front Mission, Armored Core, and Chromehounds. I see elements of all of those games in Goorusoft’s MetalWars series. So I jumped right in and downloaded the third game on my Droid. It is currently $1.99 on the Google Play market. The previous game, MetalWars 2 is still being sold at $1.99.

The graphics look wonderful and the animation is fluid. Shadow and dust effects are evident and add to the gritty, war-like feel to the game. The designs are a similar squat, “potato” type torso that I’ve seen in games like Chromehounds, Front Mission, and a good size chunk of BattleTech designs like the Crab, Mercury, or Sentinel with reverse-joint legs. Armor is tracked in total armor points instead of hit locations; identical to Armored Core. Weapons are standard near future fare ballistic and missile weapons, with beam weapons later on. Much later on- trust me on this.

It’s a first/third person shooter, but the touch-based controls are adequate to do most of what you need to do. There is a zoom mode, but I have a hard time targeting with it because the finger wipes used to tune your targeting are extremely insensitive. At times I feel like I’m pawing an old Arkanoid trackball. 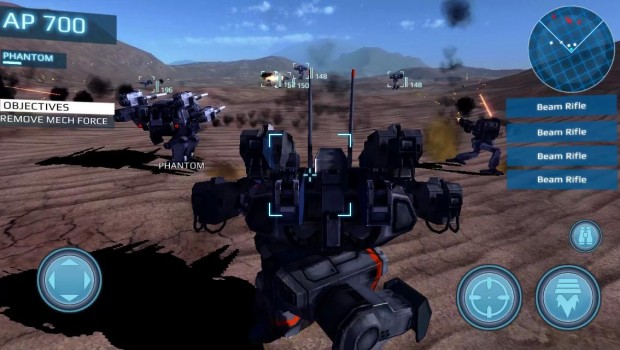 Third person ‘Mech combat that looks gorgeous, but has a few issues.

Speaking of game performance – the game is glitchy. About one third of my attempts to launch the game or begin a mission results in freezes and crashes – some of them serious enough for me to have to remove the battery from the phone. I don’t like that. And I’m tempted to avoid playing the game altogether until some serious compatibility updates are released.

The other issue I have is more annoyance than anything. I paid money to download and play the game being sold of customization and equipment research features. You earn experience points and there is a game economy, but ten missions in and I don’t have anywhere near what I need to even begin research for new weapons or gear. Unless I pay real money for universal super cash for immediate satisfaction. Now don’t get me wrong, other games use features like this, which are free to play. It’s not very often I find a game I have to pay for, and then pay again to get any kind of reason to upgrade or continue playing. I don’t mind grinding, but come on. 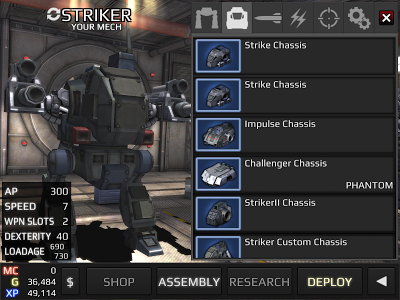 If you want to upgrade for free- you’ll need ferro-fibrous calluses.

Now for what I think really shines about the game. Besides the aforementioned excellent graphics and gameplay are the weapons effects and sounds; which are fantastic. Even with the piddly little machine guns I started with, the staccato blasts coupled with vibration of the screen make me believe there is real recoil. Another treat that really makes me think of Chromehounds are the realistic curved flightpaths the projectiles make on the way to the target, as well as the time they take to get there. Very satisfying.

Unfortunately there doesn’t seem to be much of a story outside the fluff you read on the website or marketplace. There is a one or two sentence ‘briefing’ on the way to the mission area and off you go. Oh well. Outside the stability and pay-to-upgrade issues, it’s a decent game with plenty of potential.

It’s not MechWarrior 3, but then again, neither was MechWarrior 4. And just the fact that I can compare those games to those on a phone or tablet is just amazing.  Glitches and all.