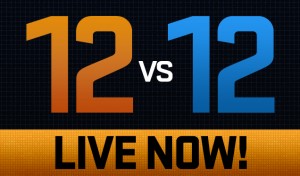 It’s finally here. Twelve versus twelve matches are live on MW:O. This is a big step for Piranha Games as well as the players of clans. For Piranha, the game needs extremely stable servers and more optimization to smoothly run twenty-four highly rendered BattleMechs on an extremely well-textured map. This is going to be a major test of their internet code, and we all hope they can pull through. For the players, especially those in Clans, the twelve versus twelve matchup is going to open up a new host of tactical decisions as well as problems that come from those tactics.

But why twelve versus twelve BattleMechs instead of ten versus ten or fifteen versus fifteen?

Longtime fans of the BattleTech franchise know the answer to this question. But for those who are new to BattleTech and MechWarrior the twelve versus twelve match-up is the iconic company on company battle. It is a staple of the universe. Each company of BattleMechs is made up of three lances (4 ‘Mechs each). Each lance fulfills some battlefield function. You can see in the video that Piranha Games posted what one lance would look like: a fire-support lance of nothing but Catapults. The Company on Company match-up is not only a test of an individual’s skill at piloting a BattleMech, but a trial of command and control.

What We Should Expect?

Balance – Many of you may have an inkling about this already and you wouldn’t be far off. With twelve versus twelve now in full swing, I would expect many of you to face hordes of challenges you never would have thought you’d have to encounter. A good portion of the tactics from your tactics handbook probably just became obsolete. For the next couple of months, expect lots of angry messages on the forums about “X being OP” and “Y being useless.” Expect to be riding high on the wings of victory one match, followed swiftly by anger and resentment the next. This is normal.

I would urge you to stick through it and not throw in the towel. I’m speculating that 12 vs. 12 will become the standard by which Piranha Games now balances MW:O. But that means that a lot of things that were quietly over-powered or under-powered will now be brightly illuminated. That battlefield tactic you didn’t think was too bad will now become the tactic that kills you and your lancemates eight games in a row and you’ll feel you won’t have any counter.

Piranha is going to have their hands full figuring out just what is unbalanced and what is balanced. The best thing we can do as players is politely post on their forums about what we think is the best way to balance the game. But expect the next couple of months be very hectic in terms of gameplay. It will calm down, I promise.

Highs and Lows of Victory and Defeat – Everyone is in the same boat as you are, even if you’ve been participating non-stop in twelve versus twelve action. Many of us will be lacking in strategies to deal with an extra four opponents per match. That’s four more ‘Mechs that can shoot at you, four more ‘Mechs that can flank you, and four more ‘Mechs that can snipe you. The range of victories is going to span from Conan style beatdowns to soul-crushing defeats. With twelve players per side, certain tactics and strategies will make victory almost assured for one side. Expect one of your matches to feel like a comp stomp, while the next one, you’ll feel like you just ran into the Black Widows.

Prepare to be Innovative – Be ahead of the curve and think of innovative tactics. Conquest matches are going to be more interesting: with an extra four ‘Mechs per map, this means a full lance can be detailed to hold a point while another full lance can be sent to back-cap. Until things settle down, be ready for anything.

If you’re lone wolfing it, make sure you find someone and stick with them. Having four more opponents to fight is bad enough. Running into them by yourself is suicide. Whereas before you could probably get away with a fun little run around, you most likely won’t be able to any longer. The odds of you running into enemy firepower you can’t deal with by yourself just shot up four fold. Now’s a good opportunity to bring a friend onto MW:O. You’re going to need someone to watch your back.

If you’re in a Clan, hopefully you guys and girls have been working on lance tactics. Hopefully you’ve been stockpiling BattleMechs to add a third lance. Either way, you need to be prepared for a rough ride. With so much command and control in good Clan matches, chances are you could find yourself running into a company of Assault ‘Mechs, a well-balanced force, or twelve jump capable sniper bots. Good, solid, and accurate communication is going to be the key to victory. There are just too many targets running around for people to not be focus firing. Now’s the time to shore-up your inter-lance teamwork.

The Rest of the Updates

Unfortunately for the Kintaro, the Drac ‘Mech will probably be overshadowed by the release of 12v12 combat. That doesn’t mean that the 55-ton BattleMech should be ignored. With each side now fielding four more ‘Mechs, a fast raider and NARC tagger could be the deciding factor in a lot of matches. The original KTO-19 model carries a NARC Missile Beacon, and at 55 tons, is not slouch in terms of speed or armor.

If you do pick up a Kintaro, expect to be a target for a lot of firepower. Your profile will be slightly bigger than other ‘Mechs that tag, and you’ll represent a larger threat of firepower. You will also be a threat to their light ‘Mechs due to your size and speed. Essentially you’ll be living in two worlds, so expect no one on the enemy team to like you.

If you end up fighting alongside a Kintaro, ask them if they’re carrying a NARC. If not, they’re probably just outfitted for back-capping or back-shooting. Be prepared to give them assistance: your opponents won’t know what they’re carrying, so they’ll probably make the safe assumption that it’s carrying a NARC, and needs to die ASAP.

Good Luck MechWarriors! Can’t wait to see you on the field!