One of the chief energy weapons from the BattleTech, not to mention the rest of science fiction’s armory was recently tested off the coast of Southern California. Photonics is reporting that in August last year, the cutting edge Laser Weapons System (LAWS) was installed aboard the USS Dewey Arleigh Burke -class guided missile destroyer for a series of sea trials against simulated air and sea threats. LAWS is based on an array of fiber solid-state lasers, and is intended as a cost-effective, high-efficiency weapon working in concert with the standard Close In Weapon System. 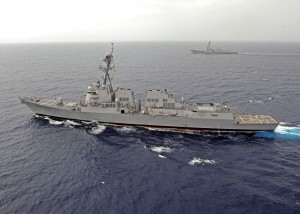 This comes after successful tests by the Office of Naval Research burned up a small target boat using an High Energy Laser; of which LAWS is be made up of six. “There was not a single miss” during the testing, said Rear Admiral Matthew Klunder, head of the ONR according to this article by ABC News. 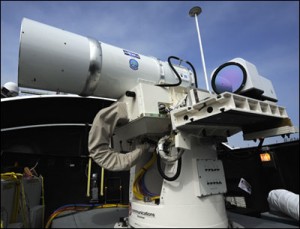 LAWS aboard the Destroyer USS Dewey

With no ammunition to speak of, A shot of the laser is estimated to cost about a dollar in energy supplied by the destroyer’s gas turbine engines. When the lifetime of a naval weapons system can be measured in decades, the savings in ammo costs are considerable when the Mk-15 20mm CIWS, (think of an AMS utilizing a Rotary AC-2) the Navy’s combination anti-missile/aircraft system and also used against enemy small craft can cost hundreds to thousands of dollars per burst. The automated search and track system for the laser was the same used for the Mk-15, which it is meant to augment, and later supersede.

LAWS is set to be installed for combat trials aboard the USS Ponce Amphibious Transport in 2014 in the Persian Gulf.