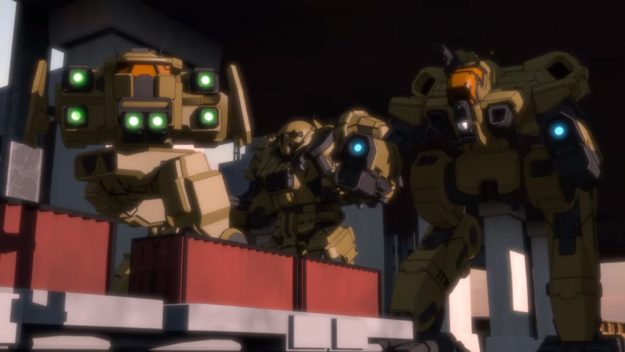 BattleTech: The Animated Series was easily my favorite Saturday morning cartoon growing up (surprised? I thought not). Now it looks like independent YouTube video makers are bringing BattleTech back to our TV screens with a teaser for a new animated series.

The teaser is on the Black Plasma Studios YouTube page and is being spearheaded by MechWarrior Online enthusiast RoA Nitrox. Much of what’s on the teaser appears to be taken directly from MechWarrior Online, including the models and sound effects. It looks like they tossed the textures in favor of smoother animation, and it’s really brought these multi-ton death machines to life. These ‘Mechs move far more fluidly than anything seen in the game and even take part in some hand-to-hand combat.

Curiously, it seems like they’re using meta-builds from the game rather than stock ‘Mechs. For example, the Cicada shown carries six Medium lasers, while the Hunchback IIC that opens fire on it sports four Ultra AC/2s – known colloquially as a “dakka” build amongst MWO players.

The Timberwolf briefly shown appears to be a laser-boat build, while the Dire Wolf is the most ludicrous build possible: 11 ER PPCs. Which, by the way, will shut you down for an entire minute if all fired at once, but only if you don’t immediately explode from the heat spike.

Black Plasma Studios seem to typically create Minecraft videos for public consumption as it remains the second most popular video game of all time. The videos are actually pretty good, with silent protagonists and music that’s all top-notch. Their “Blocking Dead” video has over 30 million views, so this is a studio that’s making YouTube money.

I don’t think BattleTech can put up those kinds of numbers, but I know I’d love to see some BattleTech animations on YouTube, and I’m sure you would too. So click the link, like, and subscribe to Black Plasma Studios and help this teaser vid become a fully-fledged animated series.