As Mech_Con once again fast approaches, we’re being teased with more details on the upcoming single-player BattleTech simulator, MechWarrior 5: Mercenaries. Just this month, PC Gamer revealed they will be running a feature article in their November issue which provides us with tantalizing info on what to expect in the first new single-player MechWarrior in over a decade.

We know from a PC Gamer article earlier this year that MechWarrior 5 will take place in the classic era of BattleTech, between the years 3015 and 3049, and much like its spiritual predecessor MechWarrior 2: Mercenaries, you’ll start with a single beat-up light ‘Mech and work your way up to becoming a full lance of the biggest and toughest ‘Mechs the Inner Sphere has to offer.

What the upcoming PC Gamer issue reveals is that unlike previous MechWarrior titles, this one won’t allow nearly as much customization as previous entries in the series. Gone are the days when you can buy any old ‘Mech and turn it into a one-man army with some Endo Steel and XL Engine upgrades, as many aspects of a ‘Mech’s anatomy will be fixed to the chassis. Instead, prospective buyers will have to scour the constantly changing market to find a ‘Mech with the specific features they want, and then tweak the existing weaponry to get it just how they like it. 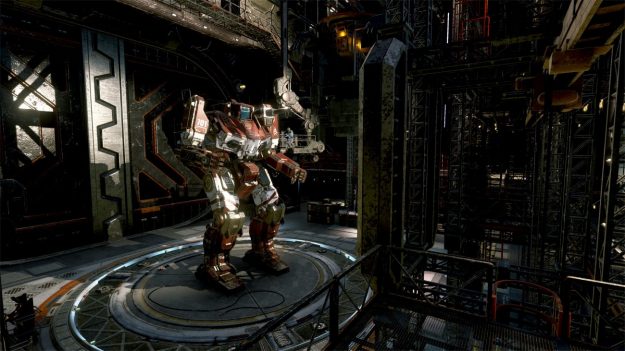 While ‘Mechs themselves won’t have nearly as much customization when it comes to their weapons loadout, the weapons themselves will have slight variations for pilots to play with. Each weapon system will have multiple manufacturers with each manufacturer giving slightly different performance. One AC/5 might have a bit more power, but another manufacturer’s AC/5 might reload a second faster, and so on. It’s not what we’re used to, but it does seem to fit more with the lore than the anything-goes customization of games gone past.

Everything about MechWarrior 5: Mercenaries will be dynamic: missions will be dynamically created, terrain will be randomly generated, and armor and structure will have multiple stages of destruction (rather than going from “chipped paint” to “on fire” all at once). Perhaps best of all, the entire environment will be destructible, so if you want to walk your 55-ton engine of death through a building to surprise the tank platoon on the other side you can do that too.

Finally, we’ve got two new ‘Mechs to add to the known list of machines included in the game. The Shadow Hawk and Raven were revealed last year with their pre-alpha footage, and now we know the Jagermech and Atlas will also make an appearance.

The PC Gamer article goes into way more detail, as well as providing a first-hand account of the author’s time with the playable alpha, so I encourage you all to pick up a copy of the November issue when it releases. Or you can get a digital copy here.