One thing about the BattleTech fanbase is that many of us have been around a while. And I’m willing to bet that quite a few readers out there remember Target Earth for the Sega Genesis and/or Cybernator for the Super Nintendo. They were well animated, side-scrolling platform Japanese robot combat suits from the early ’90s that were fun for about ten minutes until you realize the difficulty on these particular games is legendary. You Regulans and Anduriens out there probably sent a game console or two through the window. But I digress.

Christian “Crian” Fanucci, lead developer at Criansoft was quite taken with the Assault Suits games, enough to inspire him to create a game similar in play and appearance, but using his own, and perhaps a more realistic take on the genre. “The purpose behind B.A.D. was not to just copy Leynoss, Valken, etc, but to take the original idea and then evolve it.” he said to me in an email. Take a look at the trailer for full effect. 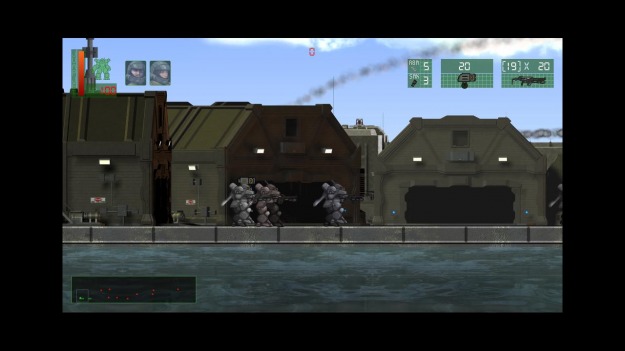 The settings are realistic, this could be just about any modern military base on the planet.

The missions do seem a lot more tactically oriented than action oriented in the old standard Japanese space shooter style that throws an array of dumb cloned sprites at you in waves, followed by weird looking bosses that grow into larger, weirder final forms when defeated. There are times when you just HAVE to get behind cover and wait for an opportunity to strike.

“B.A.D, is not an arcade game, not a simple shooter, but it has many elements that make it as close to a simulator as it is possible for a 2D game.” Being a PC game lead to many more options for controls; mainly for weapons and equipment you can select from in a loadout screen like most flight sims. Weapons are mainly conventionally upscaled assault rifles, grenade launches, Gatling guns, and various back-mounted rocket and missile pods. There are also consumable countermeasures and even “Heat Hawk”-style thermal melee weapons like axes and swords. The result is a game with probably an even steeper learning curve than Assault suits. But thankfully Crian has four different training missions to bring you up to speed. 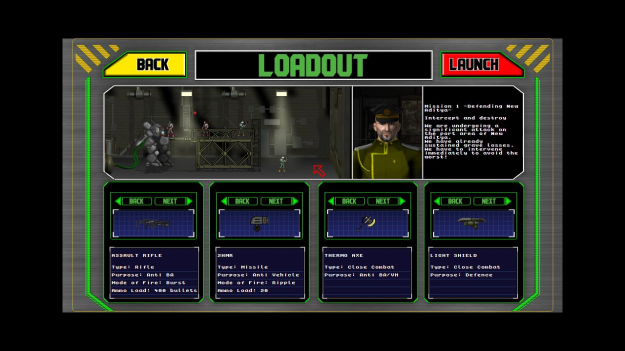 You can pick from a variety of weapons to outfit your suit on different mounting stations. Its all mission-specific.

The suits themselves, which like Assault Suits are spaceworthy, with their own RCS thrusters, more visually resemble the Wanzers of the Front Mission series or Gears from Heavy Gear. There are also human beings shown alongside the suits, showing their scale; also about on par with Wanzers or Gears. You will be fighting other battle armors, larger quad and biped mechs- including one that looks a bit like a Hollander II.

The visuals are great, far surpassing what you could probably get away with on SNES or Genesis; water and other particle effects look especially amazing. The contrails from the “Itano Circus” missile swarms stay on screen for a little while before dispersing, further showing the craftsmanship and detail that went into the game. The sound sampling is, again very good. The musical team of Albert Alvarez and Kevin MacLeod did a good job of making a suitably epic soundtrack. 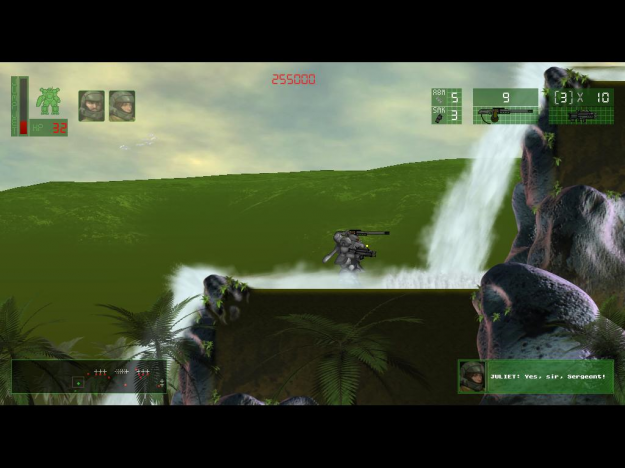 B.A.D. is fun just to look at sometimes.

The story takes place in 2512. Mars has been colonized and a new deus ex machina mineral called Ixenio is discovered there that immediately makes Mars a superpower in interplanetary geopolitics. Breaking from Earth, the new planetary nation calls itself the Independent Martian Kingdom. The IMK decides to wiggle in on a war between the Asiatic Union and the Euro American League on Earth. Modifying and tractoring a Near Earth Asteroid into a nearby orbit for use as a staging base, IMK forces join on the side of the AU, tipping the balance of power in the Earth war.

The player is an EAU battle armor pilot in a series of missions on and around the planet; from D-Day style beach invasions to Mobile Suit Gundam scale space battles. I haven’t had as much time as I would like to play more than the training missions. But though it’s definitely as difficult as the Assault Suits games, I get the sense that there is a lot more of a plot going on.

Criansoft is lead by a number of fans who put their all into B.A.D. And I think it’s definitely worth checking out the demo whether you like 2D retro-style games or just want something new to try with big stompy bots in it. You can also follow Criansoft on Facebook and Twitter.