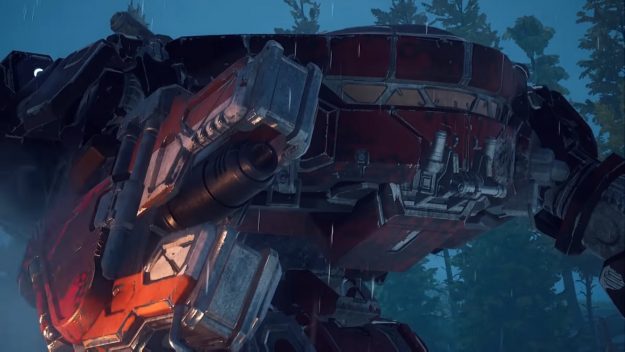 Now that the holidays are over, we turn our sights to the future where we have a lot to look forward to in the BattleTech world. Chief among them is the hotly anticipated release of MechWarrior 5: Mercenaries, which hits digital store shelves on September 10th.

We’re less than 9 months away from release, which means it’s time to get that hype train moving. And what better way to get it rolling than with a brand new game-play trailer?

This trailer initially released through IGN a few weeks ago, but then Piranha Games put it up on the MW5 YouTube channel after they got their exclusive clicks in. We here at Sarna would be jealous, but we don’t even have a YouTube channel to provide our own exclusive video links (but that does sound appealing--hit me up PGI, let’s talk).

Anyway, what we see here is a quantum leap forward in graphics. Finally, we see some real weather on these planets in the form of rain and fog. Fog of war becomes quite literal in this clip, with players relying on instruments and laser beams to see where the enemy is located. It looks really good, although frame rate still seems to be a bit of a problem. Maybe that’s just an issue with whatever software was used to record the footage.

In addition to the reminder that MW5’s development continues with steady progress, Russ Bullock himself (he’s the president of PGI, don’t ya know) posted his own video to let the BattleTech community know that pre-orders are now available.

Called the “Community Edition”, these pre-orders all come with a variety of goodies for both the impending MW5 as well as PGI’s other game, MechWarrior Online. In fact, the rewards for MechWarrior Online seem to be even greater than the rewards for MW5. Purchasing the top-tier “Ultimate Community Edition” gives MWO players 30,000 MC, 90 days of premium time, a free Marauder II, and a ton of C-Bills and experience points.

That’s an in-game value of stuff in MWO way more than the $119.99 you spend pre-ordering MechWarrior 5.

For MechWarrior 5, each tier comes with various incentives to pre-order, such as exclusive in-game skins, digital downloads like desktops and soundtracks, and access to the beta test and the official MechWarrior 5 Discord server.

So1ahma provided a handy chart that breaks down the rewards over on Reddit, which also includes the approximate cash value too (kudos to you, So1ahma). 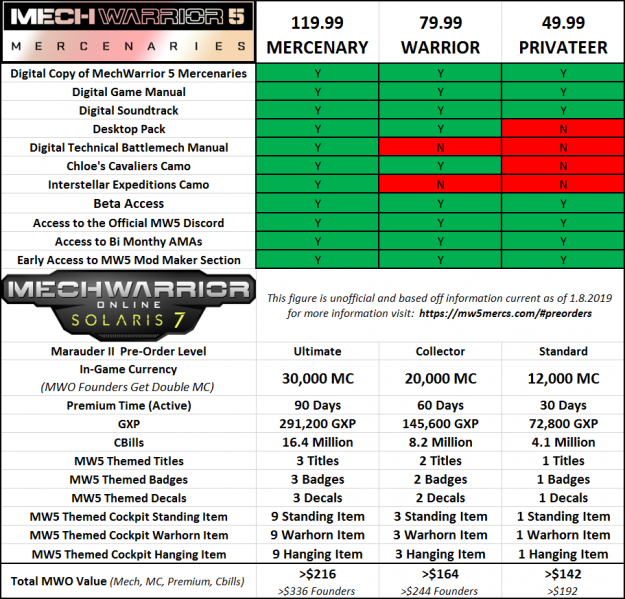 Personally, I think it’s a little weird that pre-ordering one game actually gives you way more goodies for a completely different game that is only partially related. It’s also a problem for those who really want to pre-order MechWarrior 5 but don’t even play MechWarrior Online--all those digital goodies are just going to waste.

But hey, it’s there if you want it.