On September 3, the latest development version of MegaMek was announced and made available for download.  The release came with a lovely surprise.  This release could be the next stable release of the software!

As freeware is worked on, it tends so have both stable and development releases.  As a program to play BattleTech against players or a Bot, MegaMek is a great tool that enables play outside of chucking dice and pushing metal Saturday afternoon in someone’s basement. 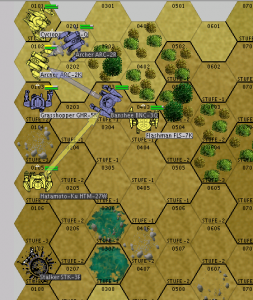 Most of MegaMek’s releases are development ones.  That means they have the potential to have some bugs in them.  Stable releases are those that are reliable, and only happen every so often.  While the most recent version is currently slated as a development release, it is also positioned as the next stable one as well.

Over the next two weeks, feedback will be accepted and that will hopefully lead to a stable release.  As long as no major bugs are uncovered, this will become 0.36.0, the next stable version of MegaMek.

As the potential stable version of the software, it comes with a lot of changes and fixes.  More than 150 changes, mostly bug fixes, have been added.  Among the new features are an option to randomize basements, and an unofficial optional rule was added to allow on-map artillery pieces
to pre-designate auto-hit hexes.  You can get the full list of changes here.

So, download the new version, and check it out.  There’s no reason not to get your ‘Mech on this week and test out what could be the next stable version of MegaMek!