I was perusing Google Play yesterday when I ran into this relatively new mobile game. It took my eyes more than one pass for me to realize I had read the title of the game right: Shadowrun Returns. Shadowrun was part of the holy tabletop trinity for me; accompanied by Dungeons & Dragons and Heroes Unlimited (Unfortunately I can’t put BattleTech on the list because I’ve barely ever found anyone else that played).

I quickly took a look at the accompanying trailer and saw my next cyberpunk experience. The aptly named Shadowrun Returns was developed by Harebrained Schemes; head by FASA founder Jordan Weisman along with Mitch Gitelman. The format is a classic isometric view turn-based tactical combat game heavy on exploration and investigation. The launch story arc is called Dead Man’s Switch, with others becoming available through Steam and an external website.

There is also a mission editor for creating and sharing custom scenarios much like MechCommander, but it’s only for PC. The overall story is supposed to tie together the canon from the videogames released on the Sega Genesis and Super Nintendo in the early 1990s as well as function as the precursor story to the one in Shadowrun Online MMORPG now in production by Cliffhanger Productions. 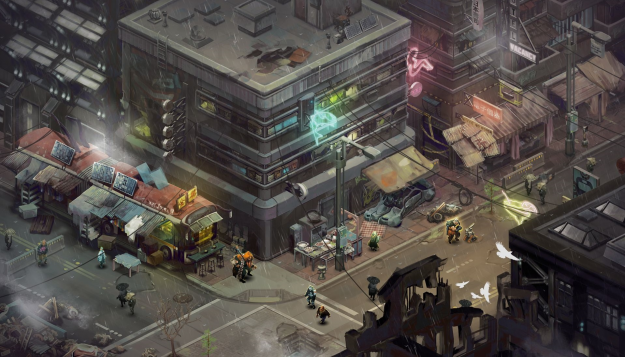 The “Touristville” section of the Redmond Barrens at its most charming

Gameplay is quite nice so far. The mechanics and attribute system seems very close to that of the tabletop game, with experience points in the form of karma and an action pool for combat quite prevalent. All the major classes are there: Street Samurai, Decker, Rigger, Mage, Shaman, etc, though certain aspects of those character classes are truncated. Rigging here now deals solely with drone robots, as there is no gameplay dealing with vehicles of any kind. At least so far.

Magic also seems to be more rudimentary, both in the number of spells and in the number of totem animals available. Again, it’s a work in progress. Visuals are exceptional. The game is quite obviously meant to be run on a tablet. I have a decent phone and it slows down a bit. But for a game that straddles the current PC and Mobile markets, I’m pleasantly surprised it runs at all on a phone. You can create a character with a modicum of choices in their color, clothing, hairstyle, and of course race. The level of customization is nice, but so far rudimentary. 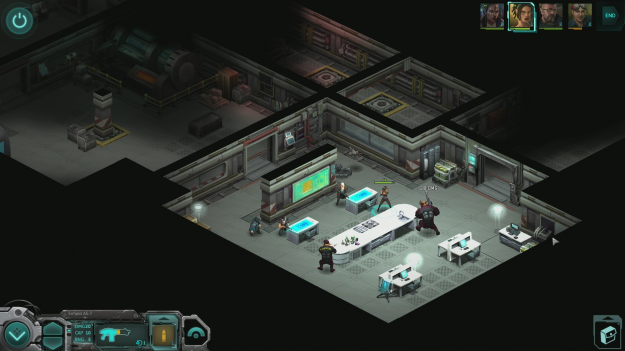 Just like the table top game you can play as a human, elf, dwarf, ork or troll. Each has their own set of bonuses to stats. Satisfactorily, the conversation trees take race into account as well as gender. Even more interesting, you begin with and can learn different etiquette for different social situations. If your character has a corp etiquette, corp NPCs will deal with you differently; opening up or closing potential subquests and conversation trees. I remember the Tabletop game having this, and I must say I’m very impressed at its inclusion and the amount of work that must go into it. 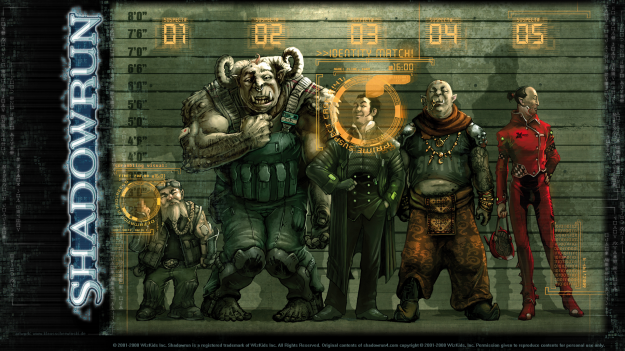 The backgrounds are 2D isometric like the SNES and Genesis games and are dark and moody, It feels very much like film noir with a heavy dose of neon: like Blade Runner but without the flying cars and a whole lot dirtier. Suffice it to say, the game looks just like you would expect from Shadowrun. You can also pan the view and pinch zoom in the mobile versions.

Sounds like Shadowrun too. The Cyberpunk genre has always seemed to favor industrial, punk and electronic music and Shadowrun Returns is no exception. Composed by Marshall Parker and Sam Powell. Fun fact, they also composed for the SNES and Genesis games. The music manages to be edgy, “in-your-face” when needed and darkly ambient as you lurk the streets. It’s totally appropriate.

Combat is very fluid despite the fact that it’s turn-based. Characters automatically crouch behind available cover when you move them, and objects have a rating that shows how good at blocking gunfire they are like Full Spectrum Warrior. Actions are very well animated. Be it a gunman actually aiming to fire, a spellcaster’s hand gestures, or a melee attacker’s body movements, the attention to detail is magnificent in my opinion. Bear in mind that this is coming from the viewpoint of a mobile player. A PC player probably won’t be quite as impressed; if only because that level of quality is expected in that medium.

I’m not a Steam member, but as an avid mobile game player, Shadowrun Returns is a welcome addition to my game folder next to the likes of Cyber Knights and Cyberlords Arcology. The game along with the launch story Dead Man’s Switch was about seven bucks. Dragonfall, the expansion set in the Free City of Berlin (hopefully this means an appearance from Lofwyr) is available for on Steam for about fifteen bucks at the time of this writing.

I’m not sure how they mean to make it available for IoS and Droid. But if they maintain this amount of quality, its well worth it in my opinion. Of course, I’m a bit biased.

3 thoughts on “Now something a bit Different: Shadowrun Returns”