In Part 1 of “One Man’s Convention – GenCon 2015” I focused on my BattleTech experiences. In this part of the two part series, I will share some of my more general experiences, what I want to get out of future experiences, and some parting thoughts on GenCon in general.

The rest of GenCon, the non-BattleTech parts, were pretty much as I expected them to be.

I don’t know if my experience was limited due to my timing, but it seemed like the cosplay aspect of this GenCon was only about par. Maybe I missed the really great stuff, or maybe it wasn’t really there. I haven’t yet taken the time to hunt down the big picture collections that I’m sure are posted up around the internet, so I may be wrong about the level of impressive cosplay that was present this year. 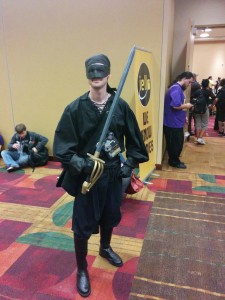 “I am not the real Dread Pirate Roberts.”

Personally, I was not able to explore much of the downtown area over the weekend due to having to book a hotel on the north side of Indianapolis. I’ve found that having to drive 20 minutes back to a hotel at the end of a full day at a convention puts a bit of a damper on one’s enjoyment of an area like downtown Indianapolis.

I would much prefer for future GenCon visits to include a hotel in a downtown location, but if future years are any indication about the possibility of that happening, I’m not going to hold out much hope. This is tied to my one real complaint with this GenCon, that being that only three hours into housing selection being open, I finally got my access ticket, and all the rooms downtown were gone.

I’m looking into how to combat this problem for future years, but my advice to you, if you are considering a GenCon trip in the future, is to think and plan carefully about the hotel and travel situation you might find yourself in. You can still fully enjoy GenCon staying away from downtown and driving to the convention every day, but it requires some forethought and a realistic expectation of what you might miss out on.

In general, this convention is unlike any other, and most of that has to do with the sheer size. One of my friends decided to go this year, his first time. He was a long-time DragonCon veteran, but his wonder at the size and scope of the gaming, which is something this only one of DragonCon’s features while being GenCon’s main and only focus, was refreshing and confirming that GenCon is the gaming convention.

One part of GenCon that I did check out, that ended up being one of my favorite parts of the entire weekend, was the famous Food Truck Alley. My companions and I decided to try out a particularly delicious smelling barbeque truck, and we were not disappointed in the least. This truck had it all: pulled pork, brisket, turkey legs, and more. The many special sauces were all enticing, and the brisket sandwich that I ordered was one of the finest in my memory. 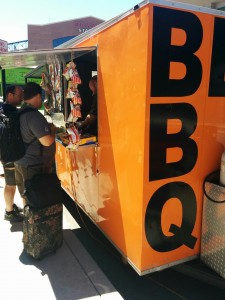 Of all of the features, exhibits, events, and draws of GenCon, Food Truck Alley is the one non-BattleTech thing that I would say everyone who attends needs to check out. It’s just that awesome. Every type of food you can think of is there. Indian, mexican, asian of all kinds, american, funnel cakes, and any and all kinds of other stuff you can imagine.

What I Would Do Differently Next Time

All of the positive and negative GenCon experiences culminate in one question: How can I make my next GenCon a better experience?

The hotel is the first thing that comes to mind. I feel like I would get a fuller experience from GenCon as a whole if I could park once when I arrive at my hotel and never have need to return to my truck until it is time to leave. I think this is going to be the major focus of my efforts in preparation for my next GenCon. The night life in downtown Indianapolis has always been a part of the GenCon experience that I want to see, so getting a hotel room downtown will be my main goal.

While I did get some gaming in over the weekend, I walked away from this GenCon feeling like I spent too much time walking aimlessly around the vendor hall when I could have been sitting down to another scheduled game. Next time, I want to craft my schedule to include one whole day of back-to-back gaming. Yes, I will likely focus on BattleTech gaming, but the main thing I want to accomplish is the feeling that I gamed until I couldn’t game any more. Whatever that looks like, I want it. 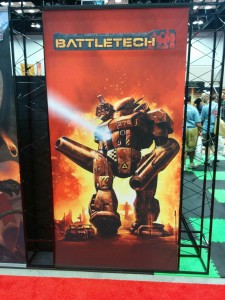 I took a lot of BattleTech related pictures.

The last thing I want to do differently is more of a wish list item than something that I can necessarily make happen with any degree of certainty. I would like to be able to carve enough time out of my schedule to arrive in Indianapolis on Wednesday and depart on Monday. While this would certainly make me a rare GenCon attendee, it would be the ultimate experience to be able to stay there for the entire time, maximizing all of the potential participation opportunities, especially on Thursday and Sunday.

Ultimately, GenCon is the perfect individual choice buffet of gaming life. There is just plain too much to do for anyone to participate in and experience every type of thing possible. That has to be what makes GenCon work on the many and varied levels that it does. The entirety of the gaming world finds its particular niche tucked away into some corner of GenCon.

How amazing is that?

Do you want to do nothing but demo every game you possibly can? Then spend the entire weekend in the vendor hall hopping from booth to booth.

Do  you want to play in so many games you can’t possibly remember them all by the end of it? The gaming hall starts gaming at around 8am and goes to midnight every day.

Do you just want to listen to authors, publishers, editors, and game designers tell you about their lives and ask for favorites the questions that you have been dying to get answered? They have panels all day long, all four days.

GenCon can be anything to any and every gamer. The key is finding your GenCon and making it work for you. 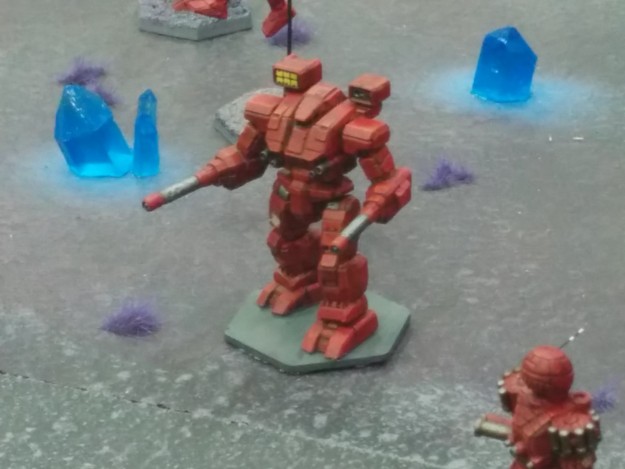 New Warhammer painted by the Camo Specs guys while at GenCon. Aren’t you glad you read this whole article now?