Piranha Games had a rollicking time last Saturday, culminating with a slew of announcements at last Saturday’s Mech_Con.

For the MechWarrior Online fans in the audience (of which there were many) PGI previewed a brand new map and game mode all based on everyone’s favorite game world: Solaris VII.

Welcome To The Solaris Games 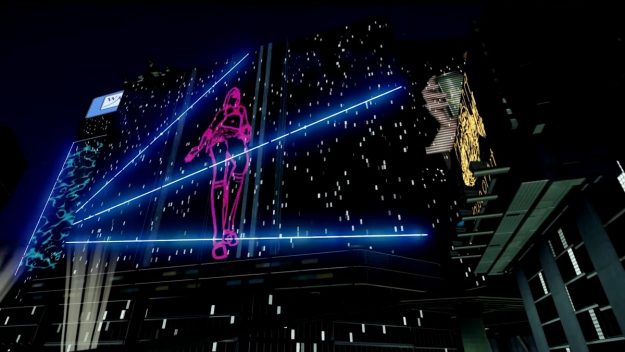 Rather than have competitive classes divided into the standard light, medium, heavy, assault, and open class, MWO will divide things up into divisions numbered 1-7. Each division is demarcated by specific ‘Mech performance rather than weight to account for the fact that some ‘Mechs are simply better than others. This means that some lighter machines might find themselves grouped with heavier chassis – and vice versa – in a very similar way to how MechWarrior Arena handles there balance issues in their unofficial Solaris-style tournaments.

Just like the Solaris Games, each MechWarrior will have their stats tracked and be placed on a leaderboard for their division based on their performance. And just like on Solaris, performance matters. You make money via patrons (similar to joining a stable) and the better you perform the greater your access will be to higher paying patrons. There’s also a “sponsor” system where you can be sponsored by companies like Defiance Industries and Vining Engineering (VEST) to give you a percentage bonus on your take-home pay.

It looks like they really tried to capture the feel of Solaris by also finally adding cosmetic additions to ‘Mechs. These cosmetics will be given randomly by patrons and sponsors (although, given the latest rulings against loot boxes in Europe we’ll have to see how that’s implemented), and they also don’t confer any real benefit. Strapping a giant ax to your Kodiak will not make it into a Berserker.

Leaderboards will track for a season which lasts three months before a champion is crowned and the whole thing resets for the next season. One can likely expect to see some special events happen here as well, such as a Grand Tournament of champions. 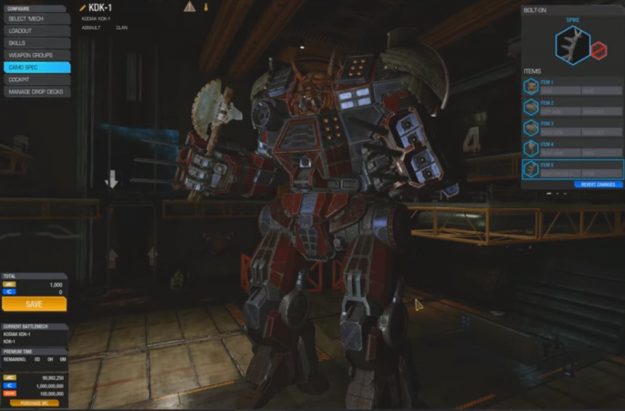 Solaris will release with three maps: The Jungle, The Colosseum, and Boreal Reach, with The Factory and Ishiyama hopefully making an appearance later.

Best of all, Solaris brings back everyone’s favorite announces from MechWarrior 4: Mercenaries – Duncan Fisher. He’ll be joined by Lars Olafson, an actual canon announcer from the Solaris Broadcasting Corporation, to be Fisher’s co-commentator.

In what appears to be typical Russ Bullock fashion, he gave a tentative release date of “spring-ish” at Mech_Con. You can check out the teaser video below.

Along with the Solaris game mode came a new map for the standard MechWarrior Online 12v12 games called Solaris City. This map imagines a raging battle happening in the actual Solaris City, with ‘Mechs battling it out around iconic Solaris monuments in a neon-filled cityscape. It looks like there will be a few destructible objects too, which is relatively new for MWO, and likely inspired by their work on the upcoming MechWarrior 5: Mercenaries.

The biggest news for MechWarrior Online fans had to be when Russ announced the largest giveaway in MWO history. For anyone that logs in to play one game on December 27th, they’ll receive 25 Stocking Stuffer clicks, 3 million c-bills, 3 days of premium time, 1250 mc (which is the game’s equivalent of about $10), and two free Hero ‘Mechs: the Roughneck and the Sun Spider. 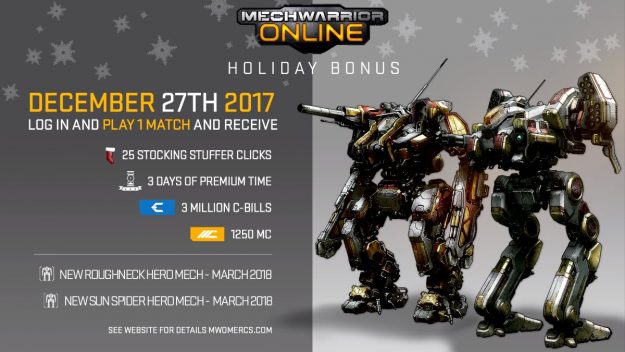 One of the biggest complaints surrounding MechWarrior Online is the heavy burden it places on new players, almost forcing them to spend real cash to make any progress. This giveaway is a fantastic way for new players to get into MechWarrior Online because it gives them a ton of resources absolutely free. If you ever considered playing MWO, download the client and log in to play one game on December 27th to get a ton of free stuff.

It really seems that PGI is trying to take the best from the two previous Mercenaries games and make a definitive single-player MechWarrior experience. I managed to get my hands on a playable alpha build later in the evening to see what all the fuss was about, and I can confidently say the game has captured the best from MechWarrior Online and MechWarrior 4, and we’ll have to wait and see if it grabs the same kind of mercenary commander feel one got in MechWarrior 2.

Russ also announced a release date of December 2018. That gives them plenty of time to polish the game and work out the bugs, which they’ll need. Even with the beefiest hardware NVidia could provide, my time with MechWarrior 5 was marred by a truly abysmal frame rate. But keep in mind that I was the last person to play the build after a full day of gameplay on an Alpha version of the game. Likely there’s just a memory leak somewhere that needs to get plugged. 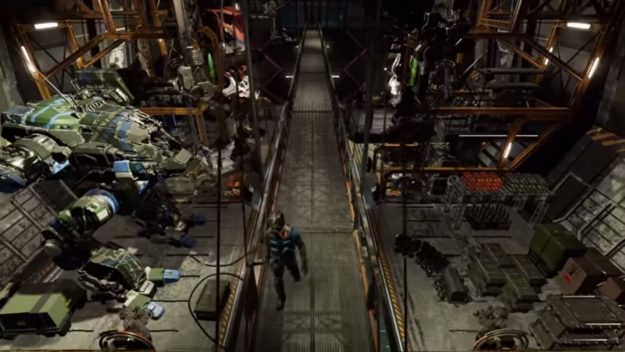 The extra year will also give PGI plenty of time to make good on their two big promises of the convention: full mod support and 4 player co-op. These are modern features never-before-seen in a MechWarrior game, and I cannot imagine the fun I would’ve had if only MechWarrior 4: Mercenaries had been a co-op experience. Details are scant, but Russ mentioned it would be like replacing one of your AI teammates with an actual human being – a godsend for any MechWarrior fan.

With 2018 fast approaching, it’s shaping up to be a fantastic year for all things MechWarrior. We’ll be sure to keep you in the know with every new announcement.