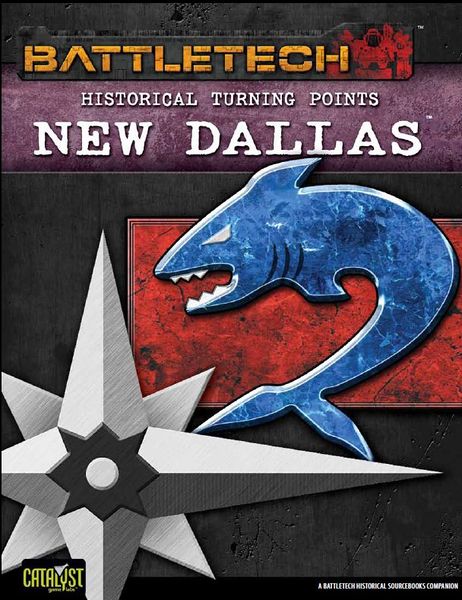 The opening campaign track pits the Rim World Republic of Stefan Amaris against the Star League Defense Force militia. The first two scenarios are fairly standard (although brutally fought) ground battles. The “Aftermath” sections of both have things breaking the way of the Star League. The third is an orbital battle, using AeroTech 2 / BattleSpace rules. I never really played the naval game as much as I would have liked, despite receiving the BattleSpace boxed set for Christmas one year, and this particular encounter features the use of a lot of drones, which somehow makes it less appealing. Regardless, the scenario’s aftermath ends the campaign track. The Republic navy takes out the Star League SDS in space, then afterwards proceeds to annihilate the League garrison from orbit. (That’s cheating!) The Rim World reinforcements conquer the planet in the name of the Amaris Empire. Bad guys win, good guys lose.

Skip ahead twenty years. Amaris is dead, New Dallas has been liberated by the SLDF and Kerensky has split the merry-go-round that is the Inner Sphere. Captain-General Kenyon Marik decides that this world would make a fine new addition to his Free Worlds League. As a certain preacher named Book once said: “There was some disagreement on that point.” So there are three ground scenarios to this campaign track, during which the militia fights desperately to preserve their homes. Guess how that goes? These are fairly standard Chaos Campaign scenarios, with some minor twists from the War chests, like atmospheric drops, EMP interference from the aftermath of the nuclear explosions and radioactive fallout. In the end, Marik moved on, almost all the militia soldiers were killed, and the remnants of the civilian population eventually fled. The players have witnessed the death of a planet. If appropriate, serve popcorn during play.

Flash forward to the Jihad. Chandrasekhar Kurita, the lovable Uncle Chandy, has discovered that the ruins of New Dallas may contain impressive amounts of Lostech, preserved all this time from the Succession Wars. (Convenient timing, isn’t it?) He sends in our heroes, the Devil’s Brigade, one of the new darling mercenary companies of the Jihad era, to retrieve the prize. Needless to say, Word of Blake gets wind of this, and sends some “Robes” in after them. The Devil’s Brigade is listed as a mixed battalion in Mercenaries Supplemental II, and the clashes between themselves and the Blakists are likely to be as diverse as the players can withstand. This third campaign track is where the book really shines. If you ever wanted to have a ‘Mech fight in acid water, or a raging wildfire in an oil field, this is your chance. To be honest, in the last two scenarios it seems difficult to believe that the Brigade can survive much less win. Still, I suppose “extremely challenging” encounters are the makings of heroes.

This applies unless your “heroes” are the Word of Blake fanatics, in which case, good for you. In this brave new era, “villains” are the new heroes. Admit it – Megatron was cooler than Optimus Prime.

There are some fine internal graphics as well in this product; although I will say that some of the depictions for the Celestial OmniMechs are starting to resemble the character models from Michael Bay’s Transformers movies. It is apparent that these illustrations may just be for show, as the unit in question, the Word of Blake’s Nineteenth Division, are highly unlikely to field. (Okay, too many Transformers references. I’m done now.) Anyway, it is nice to see that CGL brings in some quality graphic artists for these kinds of projects. Many of us remember when FASA used to do it on the cheap.

As is the case with most Turning Point Chaos Campaign books, we are also offered some unique variant versions of some ‘Mechs, in this case a pair of assault machines.

The existence of a Rifleman II had long been rumored in various products, dating back at least as far as the Solaris VII: The Game World boxed set before finally being confirmed in Technical Readout: 3075. Here we have a record sheet for the custom Rifleman II ‘Mech used by Major General Carlos Kataga of New Dallas’s SLDF in the first campaign. It is an impressive 80 ton machine, armed with the best equipment the Star League could produce at the time. It even has jump jets, which are often desirable on heavier ‘Mechs that don’t have the ground speed to evade terrain easily. It does lose some of the original premise of the old Rifleman, as its weapons payload isn’t really ideal for anti-air operations. Still, I think it can be forgiven for that.

When the Rampage, an 85 ton beast distinctive to the old Rim Worlds Republic, premiered a few years ago in Jihad Conspiracies: Interstellar Players 2, I must admit I fell in love with it a little. It has a cool name, a cool appearance and excellent weaponry. It may have been the flagship ‘Mech of the second-most evil faction in the history of BattleTech, but we shouldn’t hold that against it too much. On paper, it is similar in some ways to the classic Zeus, but with better armor. This custom model favors an LRM-20 and SRM-4 missile launchers over the standard upgraded model’s smaller launchers and MASC. It is piloted by the commander of the invading Rim World Republic troops, General Viktoria Benboudaoud. Benboudaoud is written to be a villain straight out of central casting for the purposes of this story; she has no doubts about Amaris’ goal of destroying the Star League, and will cheerfully wipe out civilians to help make it so.

As usual with these products, we get a map of the planet for the purposes of running space battles in orbit.

Overall, the product has some very solid materiel. You simply need to make sure your playing group realizes exactly what they are getting into ahead of time. That will be all for now. Thanks for supporting these reviews and the Sarna.net BattleTech News Blog. I will be back next week with a review of Technical Readout: 3145 Lyran Commonwealth, where we can see if House Steiner – I mean House Brewer – no, wait, Steiner – can survive the challenge of the Dark Age. Until then: “Don’t think, MechWarrior. Find out.”