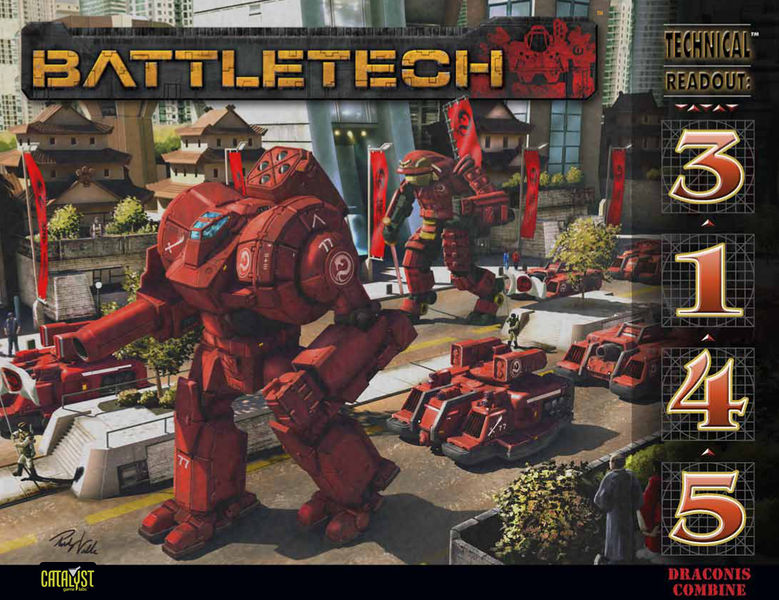 Let’s begin with the ten BattleMech designs. Most of the ‘Mechs here begin with strong configurations that add something new, and only then are they given distinctive appearances and proper backgrounds to fill them out. The Japanese/Samurai influence is alive and well with most of the machines; most of them simply look like Kuritan ‘Mechs, much to their benefit.

The Rokurokubi, the Exhumer and the Hitotsume Kozo are all excellent lights and mediums with strong combinations of speed and firepower. Not every ‘Mech of this era needs a light or extra light engine, but if you lack one, you probably need something else to keep you competitive.

As usual, there are examples of Clan tech among these machines. The Shiro is a very odd combination of Clan LRMs packed on a fast, sword-wielding heavy. It is supposedly the DCMS new “vanity ‘Mech” for top officers and war heroes. There are also a number of former Nova Cat designs which have since become common with the Combine and other factions since that Clan was destroyed. The Avalanche and the Wendigo are essentially two versions of the same medium OmniMech, one with Inner Sphere ‘tech and the other Clan. Why do we need a new Clan OmniMech in the Wendigo? Well, it gives us a torso-mounted cockpit. So that’s new.

The updated offering of the Hatamoto series, the Hatamoto-Suna, is slower than most of its predecessors, lacks a light or extra light engine, and its key feature, the reinforced armor, is fine against auto cannons but less so against other weapons. So why is it so popular amongst the samurai of the DCMS and myself? Because it looks awesome, that’s why. If anything, the samurai aesthetics have been enhanced. It’s almost as if a Hatamoto-Chi and a classic Atlas had a love child. Aesthetically, this is the most impressive ‘Mech offered by the Dark Age era thus far. We haven’t seen its miniature yet, but it will likely be impressive.

Without question, however, the crown jewel of the Technical Readout for an Assault ‘Mech aficionado (like myself) is the 95-ton Tenshi OmniMech. For those who were disappointed by the Inner Sphere heavy assault Omnis of the past – the Sunder and the Hauptmann – they’ll be well-pleased here. The Tenshi is effectively an Inner Sphere version of the classic Dire Wolf – slow, but with incomparable pod space and armor. It even looks like the classic Daishi – all guns and bad-ass.

Not every design can be a winner. I will say I don’t know why anyone would stick an Arrow IV on the updated version of the Dragon, dubbed the Dragon II. Sometime around the time they introduced the Patriot in Technical Readout: 3075, the developers decided that “command ‘Mechs” should double as artillery batteries. While there’s some logic to it, why anyone would want to be in a slow ‘Mech that was almost helpless if there weren’t any nearby friendlies with a TAG unit is beyond me. Then again, “on-board artillery” was never really my thing.

The Phoenix Hawk L, a 35-ton version of the classic ‘Mech, is an interesting successor to the Panther, but why did they have to take out the left hand and lower arm actuators? It looks like someone abducted this machine and replaced its arm with the speakers off an 80s boom box.

The offering of combat vehicles is where this TRO really shines. The new versions of the Saladin, Saracen and Scimitar are all highly mobile hovercraft with great punch. If you play on a scenario map that favors fast hovercraft, they’d have an easy time of it. The Cizin is a Clan-tech vehicle that complements those other hovers well. The Kamakiri VTOL is equally fast with strong sniping capability. The Koroshiya AeroSpace fighter lives up to its description of a “battering ram”.

The DCMS has been on a roll in the Dark Age era. They reclaimed the Dieron Military District from the Republic of the Sphere, brought in Wolf’s Dragoons to conquer the “Draconis Rift”, put down a Nova Cat-backed civil war in record time, slew the First Prince of the Federated Suns and have now conquered most of the Draconis March, effectively putting House Davion on the ropes as they did in the First Succession War. Can they actually seal the deal? There’s clearly a reason why the developers chose to “pause” the line in 3145. Years ago, they paused the story in 3067, at the end of the FedCom Civil War and just before the Jihad. They likewise did this before and after the Fourth Succession War, before and after the initial Clan Invasion, and before and after Operation Bulldog. Obviously, a lot of big things have been happening, and we can expect that something else big (or bigger) is about to happen.

What does this bode for the Dragon? We’ll have to wait and see.