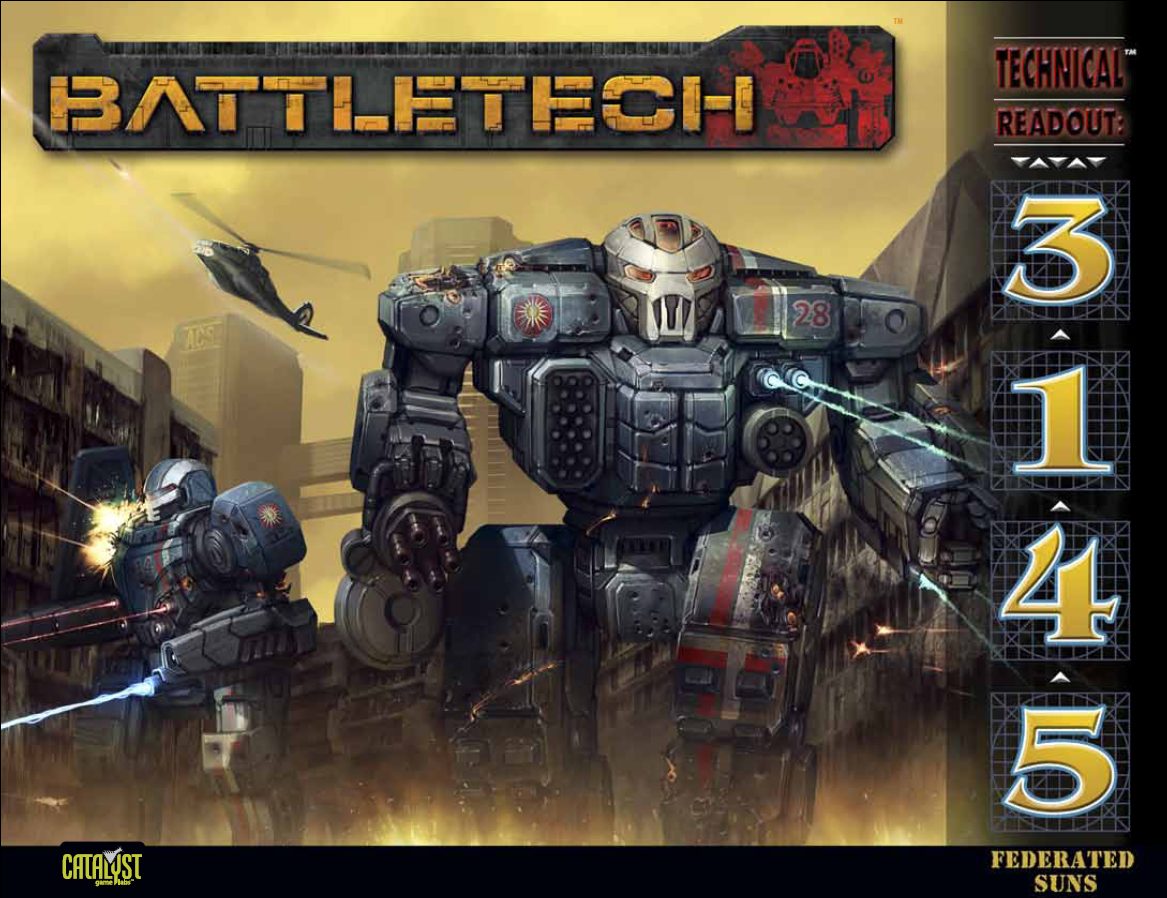 First, the key points: The Technical Readout is well-written with excellent fluff text and art. This will come as no surprise to those who have been reading my TRO: 3145 reviews. Second, as par for the course, we get a healthy mix of ‘Mechs, battle armor, combat vehicles and AeroSpace fighters. The developers continue to push the Dark Age era as very much a “combined arms” concept. There are mentions of key battles, units and characters throughout the text, giving a basic explanation to how we reached this state of affairs. (In a nutshell: Yvonne Steiner-Davion’s grandson was a schizophrenic putz, loosely based on Joaquin Phoenix’s character from Gladiator.)

The three battle armors offered here are all highly specialized units, and none will be replacing the Elemental or other classic battle armors as the standard for either the Armed Forces of the Federated Suns or in the hearts of the players. The vehicles only have few interesting offerings. We get a super-fast battle armor transport, a hover Omni-Vehicle, and not one, not two, but three artillery vehicles. (I don’t know why any military would need three new artillery vehicles, regardless of their combined-arms philosophies.)  A new VTOL offered, the Marten, is fairly unremarkable in both the flavor text and in practice, having neither the firepower nor the armor to even make a decent “sniper” in an actual combat scenario.

Let’s talk about Class-2 auto-cannons for a moment. They’ve always been the ugly step-sister of BattleTech weapons since the beginning, haven’t they? Their range is great, but they’re such low caliber for so much weight and tonnage that its almost always better to go with something else. That’s why the original Blackjack was considered a lemon. Even the LB 2-X, the Ultra AC/2 and the Rotary AC/2 didn’t change this perception. If you actually play the game, it is fairly rare to play with a map where you can honestly take full advantage of that superior range. Even if you like the “cluster spread” philosophy, trying to achieve a critical hit, the larger caliber LB X guns are a better bet. Unless your leg has been blown off, BattleTech has always been a mobile game. Not in range of your target? Move your ‘Mech up a bit. Find a spot where you have line-of-sight, and maybe some cover. The point is, there are plenty of weapons that are more practical, some of which won’t get you killed in an ammunition explosion.

Why the rant? Two prominent machines make substantial use of the Rotary AC/2. The Sortek (nice name reference to BattleTech’s first POV character) is a fast hovercraft with two of these pea shooters. Even the flavor text makes it clear they can’t hold their own against contemporary opponents like the Capellan Regulator. It is good for some quick strike hit-and-run, but there were probably better alternatives for a weapon of choice.

What’s the other machine to incorporate the RAC/2 as its primary gun? Why, it’s the Atlas III, the latest version of BattleTech’s signature ‘Mech. (Not counting the Mad Cat, anyway.) They made this version very durable with a standard engine and newer toys like an armored cockpit, Angel ECM and small shields on each arm. Unfortunately, all that leaves little room for weapons, and in a straight-up fight, the Atlas III will find itself outgunned by most assault ‘Mechs.

Other ‘Mechs: the Prey Seeker is 15-tons of fast, for people were apparently very worried about the enemy using reflective armor. While the art is cool, why a ‘Mech needs to do a Bela Lugosi impression with its arms is a head scratcher. Wind resistance? Maybe it is more aerodynamic that way? The Gunsmith is likewise a fast raider with an Extra-Extra-Light Fusion Engine. Although both of these ‘Mechs nail down the “fast” aspect of being a recon ‘Mech, it would have been nice if one of them could have carried electronic probe or ECM. As it is, they’re too much alike for my tastes.

The Scarecrow is almost a modern take on the Vulcan; a medium infantry-hunting menace. The Antlion attempts to revive the ‘Mech mortar on a four-legged chassis. Employ it at your own risk. Someone looked at the classic Centurion and decided that there had to be an OmniMech of it and poof, there it is. It’s understandable, given that original Inner Sphere medium Omnis were somewhat underwhelming. (Remember the Strider?) The Vulpes is an excellent heavy-striker with Stealth armor. Properly equipping it, though, does require Clan-tech, which always seems to be a little bit of a “cheat” to me.

That brings us to the latest version of the classic Black Knight. I will not say that it’s not cool-looking; it is. But almost everything you may have liked about older versions of the ‘Mech are gone. Its weapon arsenal is entirely Clan-tech, which although powerful, seems unsporting. This ‘Mech is slower than the original, carries a less-durable engine, and lacks the electronics package the previous Black Knights carried. Heck, for some reason, they decided Black Knights no longer needed hands, so now it’s more vulnerable to swarm attacks from armored infantry. Based on the fluff text, 3145-era AFFS MechWarriors feel the same way about all these developments that I do.

The Templar III, on the other hand, is a solid, modern updating of the first original Davion OmniMech. Granted, they essentially swapped in a light engine and upgraded the gyro, and a lot of the configurations are overly “experimental / proof-of” concepts, but these are minor issues in the greater scheme of things. The chassis is durable and, being an OmniMech, the weapons and equipment are flexible, even if loses some of the pod space the original boasted.

Two Aerospace fighters wrap up the TRO, one at the 55-ton level, the other at 70. The Rondel is a good medium attack-bomber while the Cutlass is a heavy dog fighter. Both use Reflective Armor and solid weaponry. No original DropShips or assault shuttles this time; but considering the Suns are getting hammered on all sides, they probably have better things to do.

My overall feel for the Technical Readout would probably be more positive if the previous two TROs, Kurita and Liao, hadn’t been very impressive collections in my humble opinion. Of course, it doesn’t help that the flavor text stresses the fact that the Federated Suns is getting pounded: Half the Draconis March is gone, including the capital of Robinson. The Capellans have not only re-taken almost all of what used to be the Sarna March, they’ve also seized New Syrtis. Many of the best AFFS regiments, like the Davion Heavy Guards, have been wiped out. Their new First Prince is running from one side of the galaxy to the other, and might not even be up to the job.

Still, the Suns could, and likely will, rally. They’ve certainly done it in the past, and may well do it this time.

But they probably won’t survive much longer if they keep relying on those darn Rotary AC/2s.