A very ambitious project is currently underway that may give Battletech fans something they’ve never seen before to add to a full compliment of ranged weaponry: melee combat. 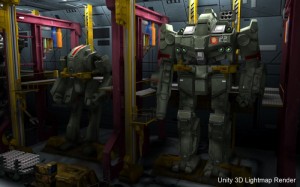 Called Project Battletech Universe, The game is the creation of Phillip Langenberg, a former Marine M1 Abrams tank crewman. So you might say he has an unusually close connection to combat with massive metal war machines. He also holds an Arts Associates, a Bachelors in Physical Education, and previously worked on Mechwarrior Living Legends, the Crysis mod.

Phillip has only two programmers at present, so progress is slow going for now. But from the screenshots and the videos posted at the blog shows great promise. Its a top-down shooter that appears to play like Ikari Warriors or Smash TV, with indicators showing both torso alignment, aim and also features a compass. The game is programmed using Unity 4, and looks really good.

The destructible environments are a great touch, which brings me to something I have never before seen in a Battletech-themed video game: Battlemech fisticuffs. Even if it remains only the simple punch as seen in the video, its a step in the right direction. And who knows, it might lead to something I’ve heard Battletech and Mechwarrior fans want for years: Death From Above attacks!

I don’t want to get to far ahead of my own drool as I think of the possibilities. One final note, as of May 12th They’re looking for a 3D artist. You can view their requirements in their news section.