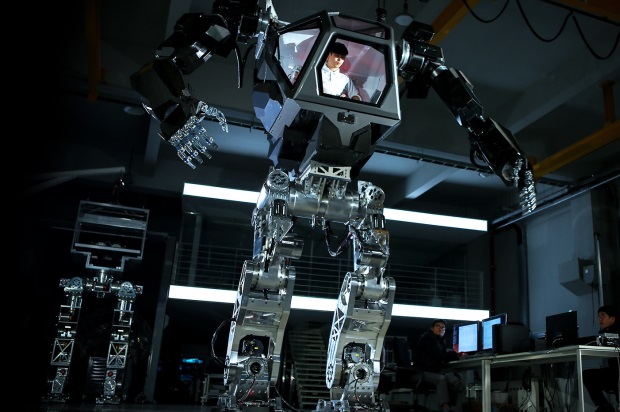 BattleMechs, the giant, hulking kings of the battlefield, have been a cornerstone of the BattleTech universe since its inception. Powered by fusion engines and controlled by neurotransmitters, these enormous walking tanks have always been more science fiction than science fact. But what if I told you that’s no longer the case?

In the BattleTech universe ‘Mechs aren’t supposed to be invented until the year 2351, however many of you may be surprised to know that we’re making astounding advances in the field of giant robots even today. Here are just a few examples of how close we are to one day having a real ‘Mech of our very own.

The first of our robots to look like a real ‘Mech, the Method v2 is made by South Korean Hankook Mirae Technology. It was designed by Hollywood effects designer Vitaly Bulgarov (whose previous works include Transformers, Robocop and The Terminator) and then handed over to a team of 30 engineers which brought this giant robot to life.

The Method v2 is piloted by a single passenger who has paired joysticks to move the Method’s giant arms. Each joystick includes a set of small buttons aligned with the pilot’s fingers to open and close the Method’s fists. Forward and backward movement is controlled via foot pedals and powerful electric motors rather than myoelectric musculature.

“Our robot is the world’s first manned bipedal robot and is built to work in extreme hazardous areas where humans cannot go (unprotected),” said company chairman Yang Jin-Ho in an interview with the Telegraph, who has invested over $200 million in the project since 2014. That said, it’s still very much considered a technology testbed, and it has only ever been seen with a heavy duty suspension system keeping it upright. The Method v2 still has a long way to go before its first untethered steps.

MegaBots at Maker Faire 2015: World Debut of the Mk. II Mech
Watch this video on YouTube.

Our next robot hails from the good ‘ol US of A, and it really shows. It’s a massive, 12,000 lb gasoline engine-powered robot that looks like an AgroMech with delusions of grandeur.

Less of a testbed for technology and more a vehicle for entertainment, MegaBots Inc. created the MegaBot Mk. II to compete in Solaris VII-style combat with the Japanese Kuratas (more on that robot later). So far it has only been seen armed with massive paintball guns, however the plan is to upgrade the Mk. II to become the Mk. III, which will have a chainsaw, massive crusher claws, and BB miniguns. All of it is more for show than real destruction as the intent of the Mk. II is for spectacle over slaughter.

As befits a ‘Mech that’s bound for destruction, everything about the Mk. II is low tech. Power is from a 430-horsepower gasoline burning engine powering a caterpillar system, along with powerful hydraulics for the limbs and torso. A gyroscope isn’t required as the Mk. II’s “legs” act more like a crane to extend the torso from its tank-like feet.

MegaBots so far hasn’t released the development costs of the project, but with powerful investors and $500,000.00 from a kickstarter campaign, the final price tag is well into the millions.

When Kogoro Kurata was a child he always dreamed the future would have giant fighting robots just like in anime. After he grew up and became a blacksmith (a job that apparently still exists in Japan) he grew impatient with a future totally devoid of giant robots, so he set about building his own. Then, in 2012, he unveiled the Kuratas to screaming crowds, and the era of giant robots for the masses was born.

The Kuratas is controlled by 30 hydraulic actuators and powered by a diesel fueled engine. Its armament includes a 6000 round per minute rotary BB gun and a power fist controlled by a glove the pilot wears. The controls of the Kuratas are perhaps the most advanced of all: the Kuratas uses a combination of control stick and facial recognition to pilot (the Gatling gun is actually fired with a smile by the pilot). It can also be controlled via remote from a handy downloadable app. Movement is done by 4 wheels on the ends of the quad ‘Mech’s legs, but the designers hope to make the Kuratas fully ambulatory without wheels in the future.

So far the Japanese Kuratas is the cheapest of our ‘Mechs with a downright affordable price tag of a mere $1.35 million. Not only that, you can actually buy one yourself if you have that much money burning a hole in your pocket – the Kuratas is for sale direct from Suidobashi Heavy Industry and can be shipped direct to your door. You can even ask for a custom paint job.

The Kuratas is set to duel the Megabot Mk. III in August of 2017.

Our next quad ‘Mech is more like a quad Elemental (which I guess would just be a Sloth), but instead of having a human pilot Big Dog is completely autonomous. The plucky little robot is controlled by a human operator who tells the Dog where to go and what to do. It can be ordered to sit, lay down, run and climb over all sorts of terrain just like a real dog.

Created by Boston Dynamics after being awarded a contract from DARPA (to the tune of $33 million), the intent of Big Dog was to assist soldiers in the field as a sort of pack-mule. Soldiers have to carry a lot of stuff, and having a robot help out would sound appealing to any grunt. Big Dog is able to carry up to 400 lbs and is less likely than even the most trained soldier to fall over.

Powered by an internal combustion engine that feeds to an enormously complex system of sensors, gyroscopes, and hydraulic actuators, Big Dog took decades of development and partnership with MIT to make it the most stable autonomous robot the world has ever seen. Sadly, the military didn’t bite, and Big Dog was put back in the doghouse in 2015.

The last of our robots and the first to see actual military use is the Mark V-A1 bomb disposal robot. This little guy was designed by Northrop Grumman in 2004 for the express purpose of handling explosive or potentially hazardous material without risking any human lives.

To accomplish its job, the Mark V comes equipped with a hydraulically actuated extender arm that allows it to manipulate objects in its surroundings. It also has a 72x zoom, 360 degree camera that feeds to an operator equipped with a 15 inch LCD screen. It can be operated via wireless radio or by tethered cable if there’s concern that a technologically capable foe is in the area and might try to hijack the signal.

The Mark V sees use not only in the US army, but also in police forces around the world. Most notable in the Mark V service history was its use by the Dallas Police Department to kill a gunman that murdered 5 officers in 2016. The robot was armed with a pound of C4 explosive, and although the gunman tried to shoot the Mark V and disable it the little robot proved to be too tough to stop.