I remember it taking a while to find a copy of this game that actually worked. I believe there was a technical issue with the software when it was first released. I’m not sure what exactly the problem was but it took nearly a year after my initial purchase to actually play it.

It’s another FASA Interactive sequel published by Microsoft, who had also developed MechWarrior IV. I like it about as much as MWIV. It had good production values, another decent live action cast, including a portrayal of Catherine “Katrina” Steiner. MC2 was a great game but like MechWarrior IV, it wasn’t groundbreaking like either MechWarrior 3 or the original MechCommander. 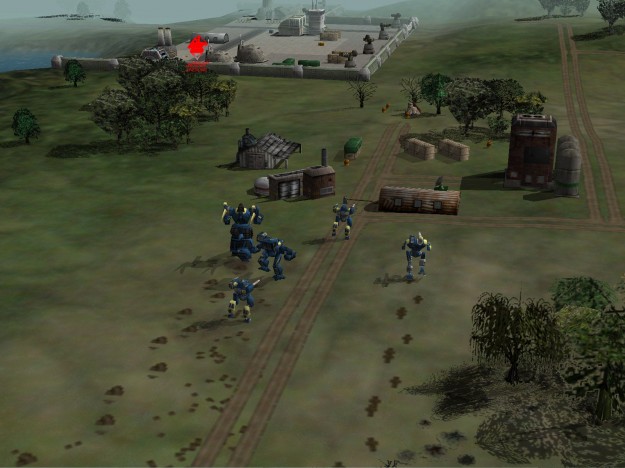 Control a larger force than ever before in a videogame.

The story opens with the player as the commander of a mercenary unit signed on with House Steiner on Carver V, a heavily contested planet in the Chaos March. Unlike previous titles, I was impressed that the writers had managed to produce a story that featured a greater cross-section of the major house factions of the Inner Sphere. There was no Kuritan or Marik presence, though I’ve never really seen any products that featured Marik in anything outside the occasional novel or sourcebook anyway. They managed to throw in some Clanners, but nothing from Luthien or the Word of Blake “pressure cooker”.

Your “boss”; that is, the Steiner commander that you report to, is one General David Renard. He’s a hard-nosed, result-driven taskmaster they will keep you plenty busy for the first campaign. Things aren’t all the way they seem however. The ethics of the situation begin to come into question, and eventually your executive officer finds a new source of employment: a contingent of House Liao that shares Carver IV in a very shaky balance with both Steiner as well as a House Davion presence. There is also a group of rebels that are tired of the constant political intrigue and fighting and want an independent planet to control themselves. You even spend some time working for the rebels eventually, which heavily reminded me of the Gray Death Legion’s first contract with Verthandi in the novel Mercenary’s Star.

The story is rich and in planetary terms is about as epic as the events on Kentares IV in the MechWarrior IV games, and your actions will directly direct the outcome of who controls the planet. But as usual, the Inner Sphere and house lords are too big to truly affect, even during a civil war.

The gameplay adds a few new features but keeps the major controls and key shortcuts from the original MechCommander, so if you’re an old hand with it like I am, game control of the sequel is nice and intuitive. The new features include a fully controllable camera with zoom, since all of the graphics are fully 3D. The graphics are alright, but nowhere near as detailed and slick as the original.

Other new features include the ability to control sixteen units; meaning you can control an entire company of ‘Mechs with four slots left over for support or scout vehicles. And you can even field repair downed friendly and enemy ‘Mechs now. This can really help during difficult missions, or allow you to capture free booty to keep or sell. Support units include attack and scout helicopters, an array of scout vehicles, the ubiquitous ammunition and repair trucks, airstrikes, and a field refit VTOL, which looks like a specially refitted Karnov.

The original number of vehicles and ‘Mechs is rather large when compared to earlier MechWarrior games, with the ‘Mechs being graphically much smaller and less sophisticated. Unlike most of the other titles who throw (mainly Clan) ‘Mechs around without regard to factional preference and manufacturing, MC2 is set up quite different. Whichever faction you are working for offers only certain ‘Mechs to sell you based on how advanced in the campaign you are, but also dependent on common ‘Mechs to that faction. Originally there were twenty-nine ‘Mechs, however I have the game installed on my PC, which is a highly modified copy that has nearly three times that number, which brings me to my next point. 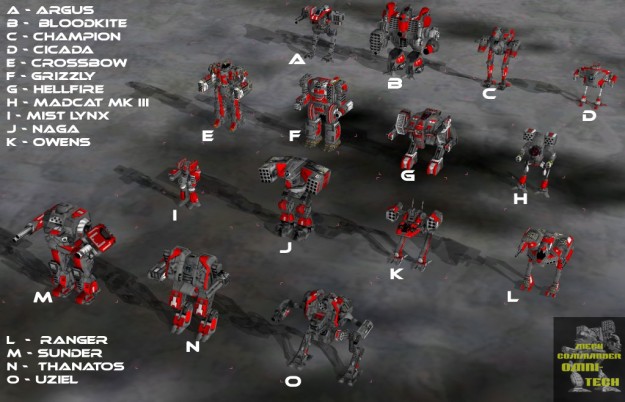 A very few of the new mechs you will find in MechCommander Omnitech.

In 2006, Microsoft released most of the game’s source code and content. It didn’t take long for fan developers to start adding new content in the form of a LOT of new mechs and vehicles as well as custom single missions and full campaigns. Eventually these developers congregated to a single forum with which to share their new content and under the title MechCommander Omnitech. Among the new campaigns include remade campaigns from MechWarrior 2, several classic BattleTech novels, and others. Some campaigns are better made than others, and some are horrifically difficult, but if you like the game, I definitely recommend checking it out. Its fun to download and try all the new content.