I almost didn’t get through art school because of MechWarrior 3. Well it and MechCommander: Desperate Measures, which I purchased at the same time and didn’t sleep the whole weekend. Both drop you straight into Operation Bulldog.  But I’ll be getting to the latter soon enough.

I think what first grabbed me about the game was the quality of the cinematics. I don’t just mean the title sequence where a Timberwolf and a Summoner proceed to melt hovertanks, step on PBIs, and ruin the day for a pair of Fireflies. But the initial briefing scene and subsequent cut scenes after missions, mainly consisting of radio chatter between the G2 (Intelligence) officer and the player’s team mates; sometimes accompanied by decrypted enemy comms. 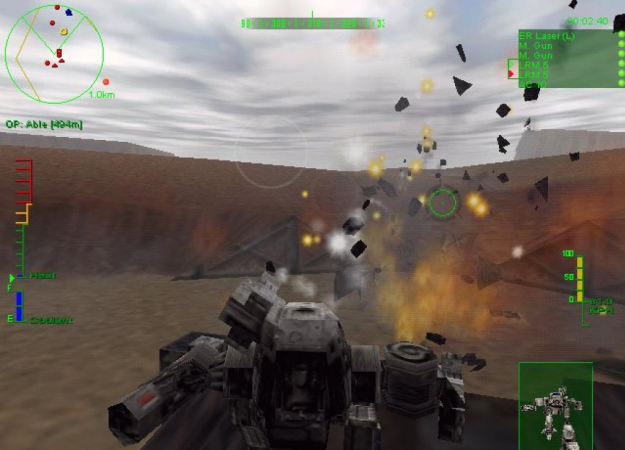 3rd person view of a Bushwacker owning something to bits.

Being trapped in a ‘Mech, which in turn was trapped inside an orbital drop cocoon, the player has a feed from the exterior of its Dropship as the intel officer attempts to deal with a task force being shot out of the sky by orbital lasers. Initially in a Bushwacker, the player hits the ground ready to start hitting objectives alone despite everything going all to hell.

It was the first time in BattleTech that I could recall outside the cartoon that featured commando tactics as part of the plot. Until I read the Operation Serpent novels anyway. In the case of the game it helped explain the lack of standard unit numbers and kept the excess stress on the computer technology of the time to a minimum. A feature that always forced an I’m-going-to-hell chuckle out of me was that you could machinegun the humans that showed up here and there on a mission. They didn’t attack or anything, just stood, walked or ran away from you, but the programmers knew enough about the players that they animated the little human bodies flying to pieces as they were hit. A disturbing nod to the darker side of the human condition of which I took full advantage. 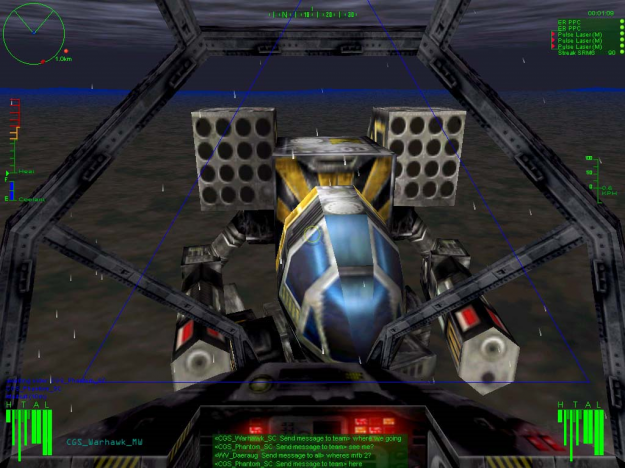 Protect yourself at all times, Don’t hit lower than the center torso now touch weapon pods and come out fighting.

As usual, the mechlab was in full swing, with a host of Clan and Inner Sphere ‘Mechs and equipment to play around with thanks to the Mobile Field Base – a caravan of refit trucks that hauled everything you weren’t stalking off to fight with. MechCommander also featured refit trucks; handy enough after a scrap that they began to be retconned into the actual tabletop game.

I have a copy of MechWarrior 3 that I can actually play using the Windows retro OS service packs. With a modern PC I’m amazed how well a game released in 1999 holds up graphically. In fact I actually prefer the graphics of MW3 to the fourth game. Don’t get me wrong. I LOVE MechWarrior IV but I feel Microsoft did not improve gameplay or the graphics significantly over the Activision game a few years prior. Microsoft even switched to flat, non-interactive sprites for humans and animals. I feel this was probably a choice but I’m getting ahead of myself.

It was only about a year ago that I found (and was promptly destroyed by) the expansion pack: Pirate’s Moon. Featuring six new ‘Mech designs, 20 new missions, new terrain maps and a two sided campaign.  On one side you have ten missions commanding the defending lance of mercs hired by a mining consortium against pirate attacks. And on the other, ten missions playing the pirates themselves against the mercs. Its an interesting way to expand on a limited storyline.

The audio-based cutscenes are still standard, with the difference that the player’s character now speaks to the rest of the lance planning the next operation, And for the life of me he sounds just like the late Michael O’Hare, of Babylon 5 fame.

About the same time I discovered that Loren Coleman also captured the original MechWarrior 3 storyline as a 115 page novella called Trial Under Fire. It originally was released as a ten chapter series from BattleCorps. Each chapter was based on a mission from the game, so it’s episodic and if you’re wracked for time its handy in bite-sized morsels. It was a good read, but having played the game many times over the years, didn’t exactly surprise me. But it was good to see the characters fleshed out some.

MechWarrior 3 is almost my favorite of the series. In terms of gameplay and the graphics it still is, but the MechWarrior IV series just has more writing and stories associated with it – which translates to a longer one player experience.

And unlike most of MWIV, at least 3 has a reason to use mainly Clan ‘Mechs.