Recently I had decided to pick up and read David Drake’s collection of military science fiction short stories called “Hammer’s Slammers.”  I was a bit surprised by just how evocative it was of many of the central concepts of BattleTech universe writ large.  We aren’t any better in the future than we are now.  We still have unethical wars.  We hold onto our religious and ethnic identities and use those to exclude and attack others.  We still have these “us versus them,” mentalities.   Technology has not led to morality. 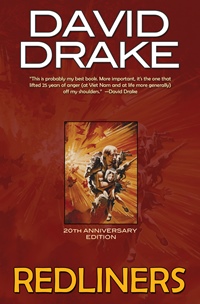 Beleaguered Soldiers on a Far-Flung Colony

There are a bunch of other similar things, like similar weapons, similar concepts of mercenaries, and more — and I was so taken aback by this pre-BattleTech story, that I wrote a review on it here.  Having read that, I decided to eventually take on another military science fiction book as well and review it for you.  Two weeks ago I was shopping at a Books-a-Million superstore when I came across “Redliners.”  It was recently re-released in this prestige format as part of the 20 year anniversary of the novel.  On the cover is David Drake talking about how this is his best work, to his mind, and the one that changed him the most after writing it.

Well that sounded compelling.  So I picked it up and started reading.

Now as I have mentioned before, I’m very comfortable with David Drake.  I’ve read a few short stories, and this is my 6th book by him.  He’s not an author I follow religiously, but he’s good at what he does and I respect him for it.  He was at a major school for studying Law when he was drafted in the 60s, and sent to work with tanks in Cambodia for two years, and then returned.  He always found it difficult to re-assimilate into life.  And this novel follows a similar track.

In a future war by a star-spanning human empire, a high reputation striker force does some bad stuff and loses a lot of people on the front line of a war against some aliens.  They have crossed the red line.  But instead of them being sent home to keep them quiet, the leader of the Empire decides to try something new.  They are sent to escort a group of colonists to a hostile but potentially wealthy colony world.  And they are pushed together and forged by fire.  (I’m trying to keep this relatively spoiler-free).

Now the book itself has a lot of the typical military science-fiction accoutrements.  Death.  Weapons.  Battles.  And the style of Drake is compelling.  It’s powerful and evocative.  And while it’s not my favorite book in the genre by any means, I get where Drake is coming from.  The book is worth the reading.

I’ve always wondered what would happen if David Drake wrote a BattleTech story.  Would it feel like a conventional one?  Would it be different?  Would he continue down that path or hew something else?  He has written in shared worlds before.  He is a big fan of the Cthulhu Mythos and has written stuff there.  So you never know.

Are you familiar with “Redliners?”  Have you read it?  What did you think?