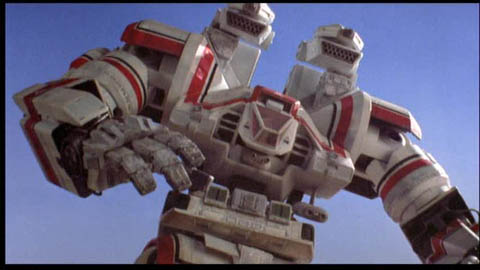 The film itself is written with uncharacteristically non-PC dialogue for the 1990s. The characters also seem flat and stereotypical. You might recognize a few of the actors, like Gary Graham from Alien Nation and Star Trek: Voyager and Enterprise, and Jeffery Combs, also of Star Trek: Enterprise as well as the voice of Ratchet from TransFormers Prime.

I have to say, I really like the overall design of the robots. They’re roughly classic Gundam size- perhaps sixty to eighty feet tall. With the exception of some of the melee weapons, like the Bolo Saw, Rocket Punch, and the laughably absurd chainsaw crotch (it’s as crazy as you might think), the overall design of at least the bipedal robots look very BattleTech-ish to me. With recessed, cockpit style heads, slab-like angular armor, multiple clusters of modular autocannons, lasers and missile launchers mimicking Clan omni tech, one of only things that doesn’t fit is their control system.

The robots are controlled by their pilots from full-body force feedback systems, every movement made by the pilot is mimicked by the robot itself. You actually see systems like this now in commercial and military powered exo-suits, but in a sixty foot tall robot, any impact is going to be transferred to the pilot, jostle him, and create a feedback loop that would probably kill the robot and the pilot. The other aspect that definitely doesn’t fit is the facts these robots don’t just have jump jets, but can jump clear up to orbit. (I give cool points for the film understanding there’s no sound in space) One scene that makes me think of the Quad Vees of modern BattleTech is the scene where Graham’s robot has its foot blown off and he converts it into kind of a tank mode. 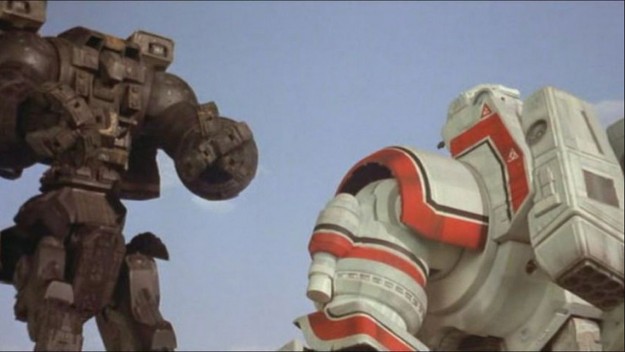 Confederation vs Market: another Cold War reference, but fought with giant freaking robots!

The film is a guilty pleasure to say the least, but what confounds me are the similarities with the Clans of BattleTech. A major part of the story are what called “Genjox”, genetically engineered human pilots developed from the molecule up to be the best robot pilots ever. The “tubies” arrogantly believe themselves better than everyone else, are athletic, have no sense of personal modesty, seem to be cultivated and educated in groups or batches, and of course, love to fight. The genetic program leader also asks the best fighters to contribute their DNA to their program, to help perfect the next generation of GenJox. Sound familiar? It really does seem to be a case of parallel development though. Lethal Heritage, written by Michael Stackpole I believe was the first appearance of the Clans in 1989 though there were hints dropped in BattleTechnology magazine beforehand. Robot Jox was released in 1990 and took several years to complete.

Even though neither property seems to have influenced the other, it’s still an interesting coincidence. The film is dated, but I have to say that for using miniatures and practical effects, the special effects and the stop motion animation of the robots is remarkably well done for that time. If you haven’t seen it before and have a soft spot for nostalgic retro-cheese or just to look for other parallels with BattleTech, you might want to check it out.