The enemy, called the Zentradi, were roughly forty foot tall humans wearing battle armor or driving the mecha the Otsol, Otscout, and Marauder was derived from. They towered over just about anything the human race could field, and the slow-as-mollasses destroids (which would one day be known as the Rifleman, Archer, Longbow and Warhammer) were destroyed so regularly, if one shot had them in the frame you could almost ALWAYS count on them to spontaneously explode. They were horrible.

And yet they just looked… MEAN. There was one scene where the signature spacecraft of the show, the SDF-1 Macross transforms into a roughly human looking configuration and actually PUNCHES straight through the prow of an enemy cruiser. The piece that made up the arm had been an amphibious assault ship with a prow that opened into a landing ramp to reveal row after row of ‘Warhammers’ backed up with ‘Archers’ and ‘Longbows’, which practically nuked the cruiser from the inside out. It was an epic win moment that made me see these awesome-looking machines as more than cannon fodder. Maybe they had some battlefield value after all.

A few years later I wandered into a toy store and found some sort of big box board game with those same big military bots I had seen from Robotech/Macross. For those of us who had seen the show, that this was called “BattleTech” and not “RoboTech” didn’t matter. Regardless of  FASA’s reasons for licensing those designs (or subsequent fallout a few years later), they were the catalyst (pun intended) for my picking that game up on the spot.

The rules were complicated and the action not very fast compared to the show, but it had toys! And videogames and computer technology had not progressed to that stage yet that has us all spoiled on instant gratification. We weren’t even teenagers yet so even when we did get bored finally and started throwing dice at each other’s ‘Mechs or otherwise went to do other things, those ‘Mechs stayed in our minds. For old grognards, those now unseen ‘Mech designs weren’t unlawfully licensed intellectual property, they were the implements of our enemy’s destruction. 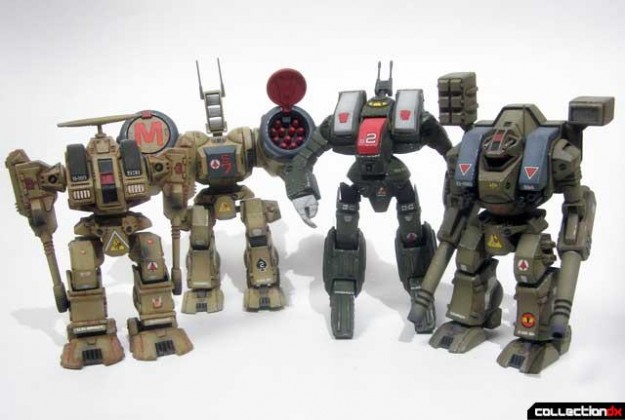 Macross cannonfodder used as the Rifleman, Longbow, Archer, and Warhammer

I have a friend that is a true Macrossaholic but never got into BattleTech other than some of the videogames. I could almost hear him grit his teeth whenever I referred to the Glaugg as the Marauder, for instance. One of the big thematic differences between the source material and BattleTech is how their movement is portrayed. The Destroids as well as mecha from other series like Dougram were fairly slow; lurching in a ‘realistic’ manner (as if a fifty foot walking war machine could be called thus). With the variable fighters and alien mecha, continuing onward to current properties like Macross Frontier, they move fluidly like a human would despite their mass. Well, a human with RCS thrusters that could convert to a high performance aerospace fighter. 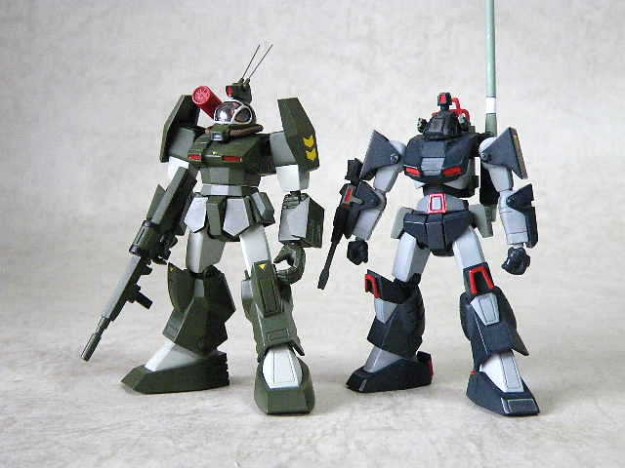 Dougram ‘mechs used for the original Griffin and Shadowhawk designs.

The portrayals of LAMs in BattleTech reflect a bit more thought towards engineering I think than the anime series. What makes for an effective ground combat vehicle and an air combat vehicle are very different things. As different as the missions they employ. LAMs (and probably quadvees though I haven’t really read up on them) are exercises in compromise engineering that really do neither job very well. So from that standpoint it makes sense that they would eventually be written out. (Until that slight revival during the Jihad) But it stands to wonder why anyone would bother to have them to begin with? The “coolness” factor pretty much ends with the anime when just about anyone can outgun and out armor you on the ground and out fly you in the air.

To wrap up, I’ll just say that no matter where your opinion lays; no matter how many new ‘Mechs or vehicles are introduced or rules rewritten for, the unseen– and perhaps by proxy, the reseen, are in my opinion the most important in the entire franchise. Those are the Mercury Seven, the starting line up.

They may not be legal to use in tournaments anymore, but I also don’t hear about anyone throwing those old miniatures out either. I’m willing to think for more reasons than the price of replacing them.

5 thoughts on “Robotech, Macross, and the Unseen”