Having played Palladium Games’ Robotech RPG back in my school days, and of course having watched both the Americanized serial and its component anime series from Japan, I was very interested in hearing about a tactical miniature game now under development by Ninja Division. 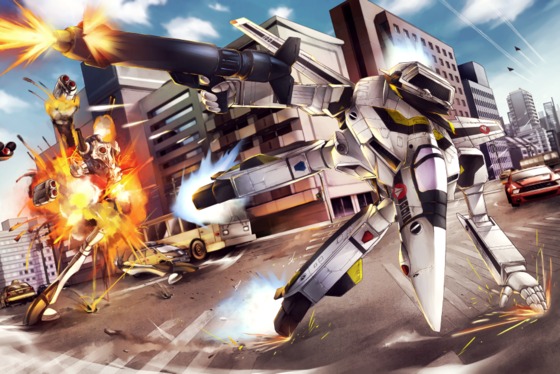 The miniatures look really clean and detailed at about Z or 6mm scale; just like standard BattleTech rules. Also similar to BattleTech is the game system’s use of six-sided dice exclusively.

The differences and similarities can be seen in this video. Instead of single sheets for each vehicle there is a smaller laminated card for tracking units of vehicles. In the case of the video, four Valkyries, two Destroids, and two units of Regult battlepods. Gameplay is streamlined, with no heat phase and interesting in that both sides are actively moving and resolving fire. 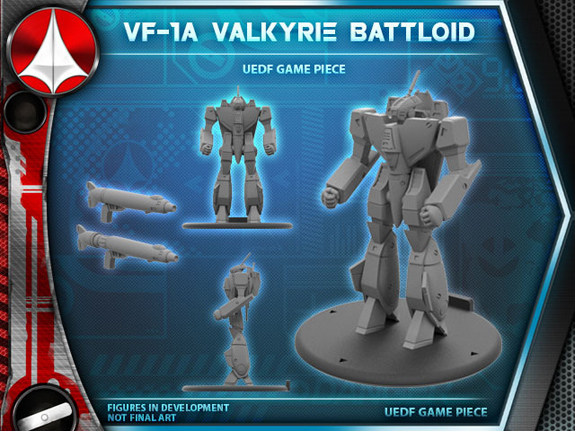 Players trade off activating squadrons during each turn, ensuring that a player never has to sit and wait while his opponent moves and attacks with his entire army. By using alternating activation of squadrons, the game’s action unfolds at a fast and furious pace, allowing large scale battles to be easily carried out in a single evening.” We’ll see how that turns out but I find it very interesting that both sides are in play at all times alternating their units. Makes me wonder if there will be the need for a reeve or referee even for pick up games to make sure there is no shenanigans. The scope of the battles are said to be from “small skirmishes” to “hundreds per side.

A couple of forums I frequent have been talking about the miniatures. Yes I mean there has been talk of using these minis in BattleTech games as Unseen ‘mechs. A little bird informed me that word spread amongst the BattleTech Demo Team Agents.  The way I hear, in a ruling from Mike ‘Southpaw’ Miller, the Catalyst Demo Team Coordinator, the official stance has been made quite clear. No Robotech RPG tactics miniatures are to grace to battlefields of the Inner Sphere during tournament or other official games. Which I think will be just fine with the general BattleTech gaming public either way.

And to me at least, there are enough differences in the game as well as my own background with the anime and game franchise that there is plenty of room in my heart (and more importantly I suppose, my wallet) for BattleTech and Robotech RPG Tactics. I’m not about to let science friction get in the way of the hobby I love. And I do think a good number of players will back me up on that.

The Kickstarter campaign funding goals were just met May 20th, Robotech RPG Tactics has an estimated delivery date in December this year. I’m not sure what the initial cost of the system will be, but as a ballpark figure, for an eighty dollar pledge during the Kickstarter campaign they reserved you a copy of the game. Most will probably end up spending more than that for booster packs and upgrades. Macross had a lot of different mecha designs. Certainly more than the unseen.

We will keep you updated for updates, including what the final sculpting for the minis looks like and any other changes.

One thought on “Robotech RPG Tactics”