I recently interviewed a custom miniature designer who utilizes modern 3D printing technology to make custom Z, N, and even HO scale (Mecha Front) war game figures. Well I have fallen into the “Shut up and take my money” pit once more. 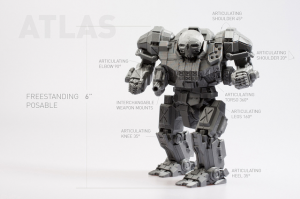 Six Inches of Pure, Unrefined Awesome (wonder if he’d make one of those too…)

Kotaku recently posted an article on a BattleTech and MechWarrior fan with a 3D printer that has developed and is now selling this incredible Atlas figure that features eleven points of articulation. ‘Valcrow‘ designed this miniature engine of destruction with modular weapons components that can be removed or swapped- suggesting he might have other models on the way.

While meant as a pose-able decoration, it goes without saying that this Omni Atlas is another example in a long series of remarkably talented BattleTech fans dedicated to making larger than the average bear model kits able to play actual massive scale BattleTech using expanded 28mm hexless rules. 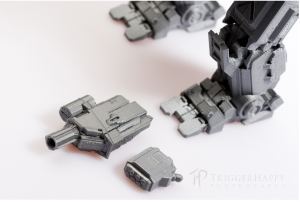 Valcrow’s use of MechWarrior Online version makes sense considering what Christ Gotcher said in his interview a few weeks ago about the licensing no-man’s-land that lays between BattleTech’s tabletop and various videogame likenesses. And with no official large scale licensees making big toys for the big boys, the ingenious and the innovative will step up to the plate for love of the game, if not to pick up a few extra bucks.

I’m not sure how much Valcrow’s Atlas goes for or how many people are interested in getting one (raises hand), but as long as there is a means to communicate the existence of these wonderful toys- “If you build it, they will come.”