I think most people in or out of the military loop have at least heard of US warfighters using a ground-based fighting robot in Iraq and Afghanistan. Perhaps not as dramatically as videos from Reapers and Predators dropping JDAM-equipped bombs and missiles, but show a picture of SWORDS (Special Weapons Observation Reconnaissance Detection System), and most people will see a miniature remote controlled CAT with cameras and a gun and get the idea. 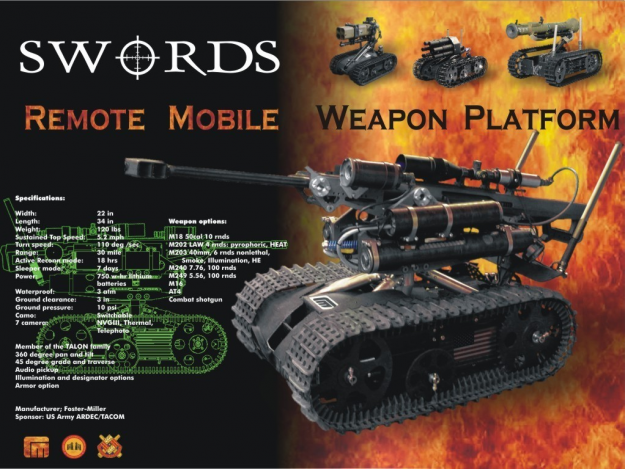 I’m not sure whether to be pleased or concerned that military weapons have ads that look like they came from Playstation or ‘SWAT’ magazine.

There is a debate raging in Washington right now on whether or not “mechanized soldiers” have a place on the modern battlefield. Probably from bad press over collateral damage and questionable targets overseas. Lt. Col. Stuart Hatfield at the Association for Unmanned Vehicle Systems International conference said that misguided bullets can be even more problematic than misguided bombs because of the distances that can be traveled past the intended target when interviewed by National Defense Magazine.

More interesting I feel is how the weapons themselves were deployed when overseas. SWORDS; essentially a kitbashed TALON bomb disposal robot was used not as part of a mobile patrol as robotic fire support or as the crux of a structure entry team as envisioned, but as self-propelled remote sentry that watches a static position. If you’ve played any of the MechWarrior or MechCommander videogames or have seen the director’s cut to James Cameron’s 1986 film Aliens, you are supremely familiar with this concept. 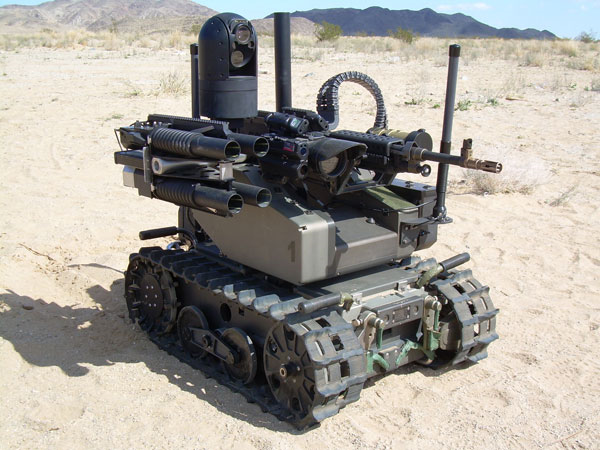 As long as there is a human being behind the monitor making the decisions, I don’t see that there is much of a practical difference whether the bullets or grenades (or bombs or missiles for that matter) are triggered by a trigger or Microsoft Sidewinder D-pad.

At least with one of these guys, there is a video record of the events. Or atrocities. But that’s a different article- and a different blog.