On Sunday, December 14, all three in house products were released for MegaMek, MekHQ and MegaMekLab.  These three development releases are timed together in order that users of the different programs can use them simultaneously.

If you are feeling a little bored today, and want to play some BattleTech, then just check out the free java-based MegaMek and it’s suite of programs.  The additions to MegaMek 0.39.4 handle some bugs, as well as improve images and other miscellanea.  All told, there are around 20 changes to the software.  MegaMek is a free java-based program that simulates playing BattleTech against the AI or real folks, and can be used to host games online.

Meanwhile, the full list of changes for MekHQ reveals a number of bugs squashed.  It can be used to track campaigns and manage your unit, and works with MegaMek as well.  Meanwhile, the MegaMekLab predominately enables it to communicate with the others.  Feel free to build your best stuff and play it against folks in MegaMek.

On Saturday, September 27, two new development releases were announced for MegaMek and MegaMekLab.

A full list of the changes for MegaMek 0.39.2 can be found here:

The list of additions includes strengthening the AI “bot” that you can play against, as well as adding rules such as strafing and a variety of bug fixes.  All told, there are more than 50 changes to the game.  MegaMek is a free java-based program that simulates playing BattleTech against the AI or real folks, and can be used to host games online.

Meanwhile, MegaMekLab was updated to work with the new MegaMek development release.  You can build units with save-files that are compatible with MegaMek and try them out against friend and foe alike.

So download either or both, and get your Mek on!

On Saturday, August 2, developers for MegaMek released a preliminary version of a map editor feature for MegaMek.  This will allow players to edit their maps prior to playing, so that they can play on a map they modified.  This highly anticipated feature is in the earliest, debugging stages.

MegaMek is a great way to play the BattleTech game online with some friends.  You just have to have a device that runs Java, and download the free client.  There are numerous programs that run with it to create campaigns, online worlds, and more.  Check out MegaMek and give it a spin.

On July 4, the developers announced a new release of MegaMekLab version 0.1.29.  While the new version does not squash a lot of bugs (just 5) it has been altered to work better with the latest stable version of MegaMek.

MegaMekLab is a java-based freeware program that allows you to build various units, such as BattleMechs, Infantry and Vehicles, and those can be transferred to MegaMek. Add your favorite designs to the latest stable version of MegaMek. And get your Mek on!

On Sunday, June 8, the Dominion server of MekWars launched its 3rd Cycle.  This is essentially a reboot of the campaign which is often accompanied by some rules tweaks to shape the new campaign differently.  Dominion is set during the 2750 time period of the Star League.  Players can play as actual units in that era, ally with various factions, and then fight using the MegaMek client.

In order to play, or find out more, just head on over to their main website and download the client.  You only require the one program, it has everything else.  Just extract it and you are good to go!

When the Cycle begins anew is a great time to join the campaign.  Since it’s fresh again for everyone, you are all starting at the same level.  MekWars is an online Java-based program that runs a campaign for various players and controls the units you have, repairs, cost, and more.  It matches people to play against each other, and then they play using MegaMek.  Factions vie against each other, and the results of battles impact the ongoing campaign. So check it out. 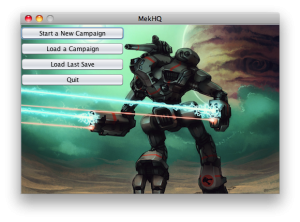 On Saturday, April 26, a new version of MekHQ was released.  The list of new changes includes more than 180 alterations in the new version, 0.3.4, including the squashing of numerous bugs and the addition of many features.  Some of the new additions include new campaign options, clan options, and Manei Domini options.  MekHQ is a free java-based program that works with MegaMek to create campaigns that are guided by the software.  You can build a unit, recruit, take contracts, fight, and then come back and pay for repairs and such.  It’s a great way to avoid having to deal with having to GM all of those tasks yourself.  Check out the latest edition!

In anticipation of the next stable release of MegaMek, the first candidate was released to the public

on March 29, 2014.  Version 37.9 will hopefully pave the way for 38.0, as bugs are quashed while other changes are implemented.  Despite the experimental nature, more than 90 changes have been implemented for this version. MegaMek is a Java based program that enables you to play BattleTech against the AI or friends, especially online.  So if you’d like to try out the first experimental release to pave the way for the upcoming stable release, you can download it here. Post any comments about the version in the official BattleTech forum thread. Get your game on!

On February 10, 2014, the latest version of MegaMekLab was released!  MegaMekLab is a free java-based program that can be used to design units that can then be used in MegaMek, as well as other places.  BattleTech Players love to craft their own home-grown brews.  But if you want to test your designs online against other people or solo against AI, you’ll need a way to convert them to MegaMek, which is a great way to play the traditional wargame. Enter MegaMekLab. 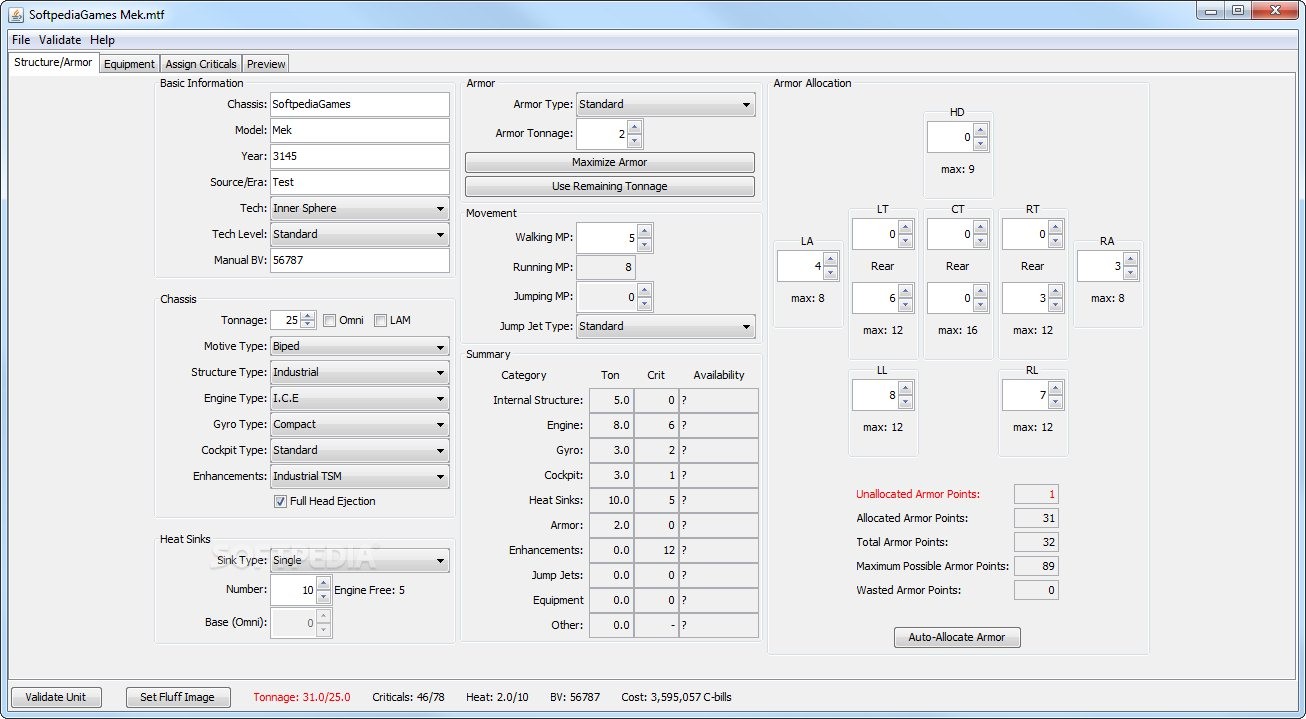 After checking out the list of changes, I was suitably impressed at the sheer amount of effort that the volunteers put together.  A long list of bugs fixed, changes and additions to the software clocks in at over 100 changes!  Why not download this latest version and try it out?

On Saturday, December 21, the developers of freeware java-based program MegaMek announced a new development release.  This comes on the heels of the latest Stable release two months prior.

This new release comes with a large number of changes. The changelog is quite extensive, and can be seen here.  It includes more than 160 changes, bug fixes, and new features.  Among the list include the completion of Super-Heavy Mechs, new pilot options, the addition of new starting options, fixing Anti-penetrative Ablation armor and more.

MegaMek is a great way to play the BattleTech wargame either by yourself against a ‘Bot or against other people online.  So grab the latest version and get your BattleTech fix today!

I was cruising Reddit earlier when I came across an announcement by SteveRestless that he would be hosting a MegaMek grinder on Friday as a point of avoiding the real life battles in the stores. He also added that grinders are an excellent way for newcomers to both Megamek and BattleTech to learn how to use the systems. SteveRestless defines a grinder as much like any other online videogame deathmatch:

“The format I’ll be using is that players will start in a low-tech light mech, with a mundane pilot, and things will go up from there as calamity ensues. Veteran and New players alike are welcome, and if someone is unfamiliar with using Megamek, I’d be glad to give them a few pointers along the way.”

You can join up this Friday on #battletech on the Espernet IRC Network (irc.esper.net port 6667 or here), or by email at restless@chaosgarden.net.