All of the art we’ll be looking at is listed for sale, along with prices, on a document passed along to us by Melba Chaffee.  While many of his BattleTech pieces were picked up by others, most of these should still be available.

Let’s begin with the cover from the Tukkayid Scenario Pack: Without all of the distractions, this is a wonderful piece, full of action at every scale.  One of the largest military actions in the 31st century is depicted, as clan and ComStar face off.  It appears that the art itself is a little lighter than the cover of the book, which darkened it.  With the lighter art, the Behemoth is not as dull, and detail pops out.

He created some great cover work for books like the Technical Readout: 3058 and 3060.  But one cover we find really interesting is the Solaris VII Mappack:

Here we see Yen-Lo-Wang in battle at the Solaris VII venue.  The modified Centurion is dodging and blasting away.  Without the distracting words over the top, the art pops as the scene moves to take center stage.

Now let’s move to some lesser known art.  Let’s begin with some art from the CCGs.  Due to the nature of these pieces, they are smaller – they tend to be 5.5” by 6.5”.  While he has many mech CCG art, such as the Axman, Grim Reaper, Pillager and Gladiator, let’s look at some of the other work he did, which is just as good.  Frankly, the non-mech pictures tend to really flesh out the universe well, and also tend to be cheaper to purchase.

Here is the Mobile Headquarters: 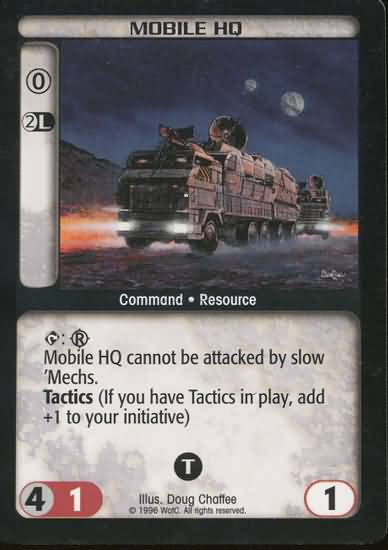 Support for the win! (Image by Troll and Toad)

The actual art has a bluer more alien looking sky, which the CCG appears to have darkened to make into a typical night. It’s a lovely feature of support equipment.  He has some tanks, such as Mobile Long Tom or the Chaparral. 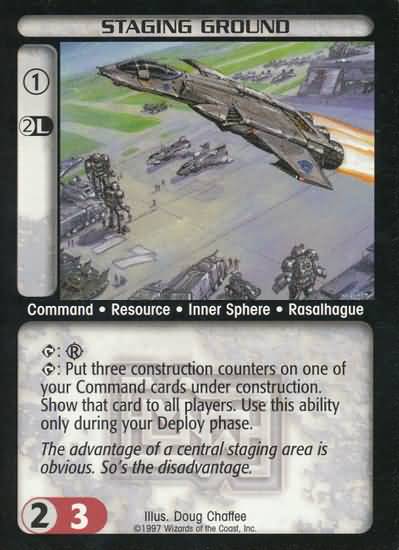 Where is the fighter going? (Image by Troll and Toad)

The fighter taking off over the Rasalhague base creates a nice scene.  The odd angle of the fighter in the image shifts the focus nicely back and forth from the background.  Of his scenes though, this is one of our favorites.  This is Aerospace Fighting Mission from the CCG: 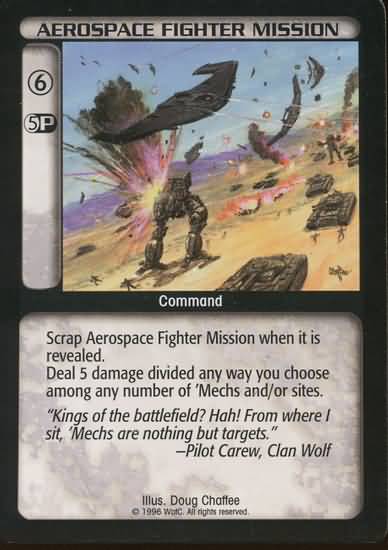 Sometimes the mechs don’t win!  These fighters are wreaking havoc on the battle formation below. The devastation unfurled by the fighters can really be felt looking at the card.

And of course, all of these images are in addition to many other CCG cards Chaffee illustrated.  You’ll find work of things like battle armor and VTOLs.

Finally, there is a section for the covers for several novels.  Some of these novels include Measure of a Hero, Test of Vengeance and Initiation to War.  Here is the cover from Operation Audacity, which looks particularly good in art form: Somebody’s about to lose an arm…

Doug has graced us with a rich legacy of art that will continue to bless our community.  One last piece of art, that really gets the action and power of BattleTech is the cover to the Operation: Stiletto scenario  pack.  As the mechs are hot landing, with the dog fighting and DropShip in the sky behind them, it’s truly an amazing piece of art that demonstrates pace.  Everything is a heartbeat away from destruction. If you are interested in seeing the pieces that are still available, you can click for it here:

Let’s celebrate the impact of a great painter on BattleTech today, and raise a glass in his memory.

P.S. – As an aside, I picked up the Axman art myself, and it looks beautiful on the wall.  It came with a certificate of authenticity and a signed artist proof copy of the card.