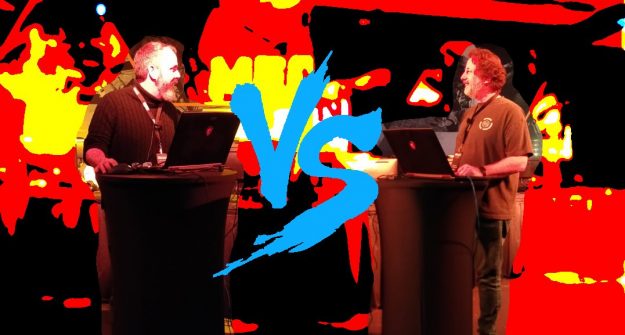 The stakes had never been higher for these two giants of industry. At Weisman’s suggestion, the pair agreed that whoever won the duel would take their opponent as his bondsman for a period of one week.

“Will you kneel to me, Weisman?” Gitelman asked.

And thus, the battle was joined.

Both sides chose a mixed lance of ‘Mechs as their forces. For Gitelman a Kintaro, Jenner, Quickdraw, and Victor. For Weisman a Firestarter, Victor, Quickdraw and a Shadow Hawk. As would become apparent in the battle to come, Gitelman preferred designs built for close-range, hyper-aggressive brawling, using jump jets not only to close the distance with his opponent but also frequently as a weapon. Weisman, in contrast, preferred a more traditional approach to combat, grinding his opponent away with focused fire from his tightly grouped unit. 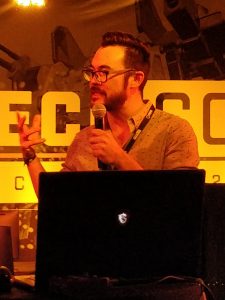 The battle began with both sides already very close to each other (likely having moved their units closer during the fight’s preamble). Perhaps prepared for Gitelman’s initial push, Weisman braced his Quickdraw before the opposing Quickdraw could close for the fight’s first exchange. Gitelman fired all of his Quickdraw’s weaponry with all of it striking Weisman’s heavy ‘Mech, but as it was braced it only took half the damage it normally would.

“I was hoping to core his cockpit on the first try,” Gitelman explained, as now his Quickdraw was exposed to return fire from both Weisman’s Quickdraw as well as his Shadow Hawk.

Mike McCain, BattleTech’s Game Director, added a useful tidbit straight from Harebrained’s corporate office. “Mitch has a saying around the office: ‘hope is not an effective management strategy’.”

His words would prove prophetic.

Gitelman’s next move was to split his forces, peeling his lighter Kintaro and Jenner off to the west and leaving his heavier elements to pin Weisman down. Weisman pivoted his lighter elements to meet the push, jumping his Firestarter on top of a hill. At first, it seemed the move was to just have superior vision on Gitelman’s forces, but Weisman explained that the Firestarter was actually facing away from him in an apparent act of disrespect for his opponent. 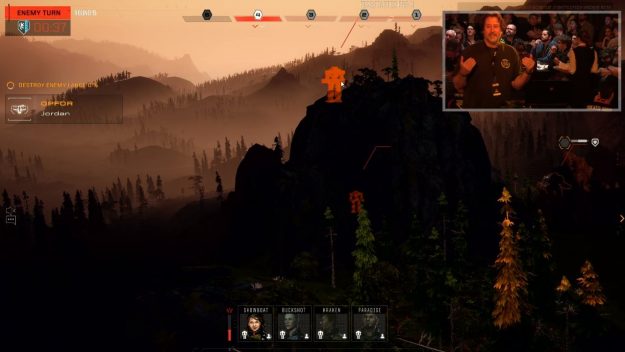 “The Firestarter has turned his rear to you and is mooning,” Weisman said. I’m not sure if he remembered the paper-thin rear armor that his Firestarter possessed.

Now that it was the Shadow Hawk’s turn to move, Weisman ordered it to fire its full complement of weapons into Gitelman’s Quickdraw with only its LRMs missing wide. Weisman’s Quickdraw then also strode forward to launch an alpha strike on the opposing Quickdraw, doing heavy damage to the heavy ‘Mech’s protective coating.

Gitelman responded by sending a flight of LRMs from his Kintaro into the Weisman’s Shadow Hawk but only succeeded in pocketing the medium ‘Mechs armor. His move with the Quickdraw, however, began to reveal Gitelman’s unorthodox battlefield tactics. Rather than retreat the damaged machine to its compatriots, he pressed forward in the 2v1 engagement and jumped in between Weisman’s Quickdraw and Shadow Hawk. He then alpha striked again on the beleaguered Shadow Hawk causing major damage to the machine but shutting himself down in the process. 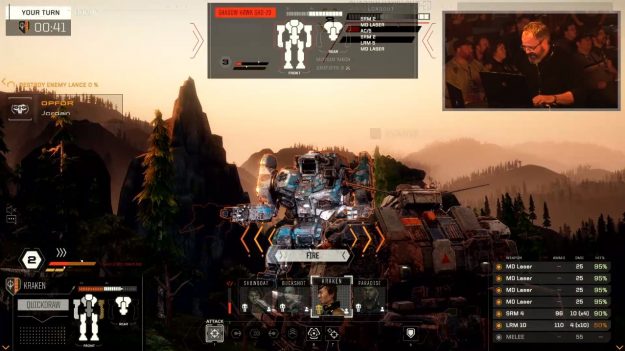 Completely at Weisman’s mercy, the FASA founder strode his Victor to within firing range and opened up with his massive AC/20, coring the Quickdraw’s center torso and disabling it’s SRM-4, but failing to drop the 60-ton machine.

Gitelman then tried to come to his Quickdraw’s aid, jumping his VTR-9B forward and firing all his weapons despite poor odds for success. Never being one to trust the odds, Gitelman’s Victor found purchase with his AC/20 and SRM-4, but missed with both Medium Lasers. It also nearly shut down from the heat load in another risky move.

Weisman decided to hit back with a dangerous move of his own. Jumping his Firestarter from the cliff it had perched itself on, it landed on Gitelman’s Quickdraw in a Death from Above assault, which combined with the fire from its Flamers and Medium Lasers finally caused the Quickdraw to drop. 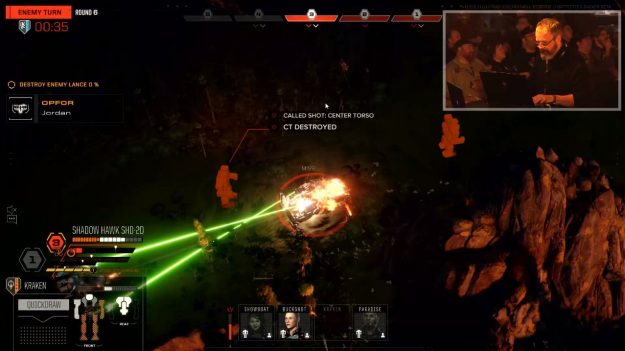 via Mechwarrior Online on Twitch

Perhaps realizing that splitting his forces was a poor tactical choice, Gitelman sprinted his Jenner back into the fray, but not in time to save his downed Quickdraw. A single blow from the Shadow Hawk’s AC/5 was enough to breach its fusion engine and take it out of the fight for good. First blood goes to Weisman.

With Gitelman’s Victor all alone, Weisman moved his forces in to close around the lone assault ‘Mech. That Victor proved to be a tough customer, however, as it jumped on the remaining Quickdraw, removing its left arm. Gitelman also managed to get his Jenner behind Weisman’s Victor, breaching its thin rear armor and tearing into delicate internals.

The minor victory was short-lived as Weisman plowed his Firestarter into the Jenner, taking off its right arm and half its Medium Lasers. The Kintaro entered the fight by firing its full complement of weapons at Weisman’s badly damaged Shadow Hawk. It struggled under the assault of over 20 missiles but managed to stay upright with only the loss of a single heatsink. 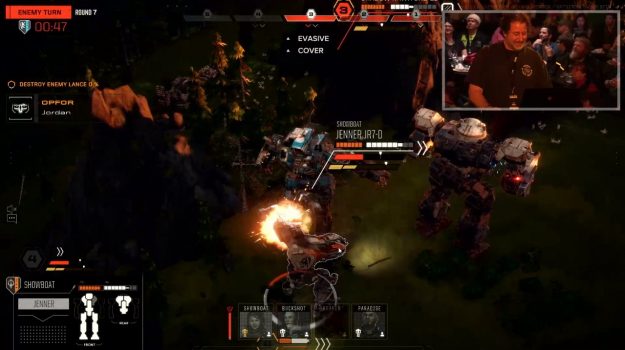 Still dangerous, the Shadow Hawk took off the Jenner’s other arm with a backhand slap, effectively disarming it. Rather than striking the Quickdraw on its right, Gitelman ordered his Victor to attack the other Victor, taking off its AC/20 arm but overheating in the process. Weisman’s Victor jumped on its aggressor, also removing an AC/20 from the fight.

No longer carrying an effective weapons load, Gitelman’s Jenner hopped on top of the Shadow Hawk, taking off its left torso and AC/5. With critical damage starting to mount, only Gitelman’s Kintaro remained unhurt. That changed with Weisman jumping his Firestarter onto it while firing its Flamers, overheating and toppling the medium ‘Mech but destroying both its own legs in the process.

The Kintaro would have its revenge after finding its feet and pumping all 18 SRMs into the Shadow Hawk’s chest, killing the opposition but cooking itself and shutting down. 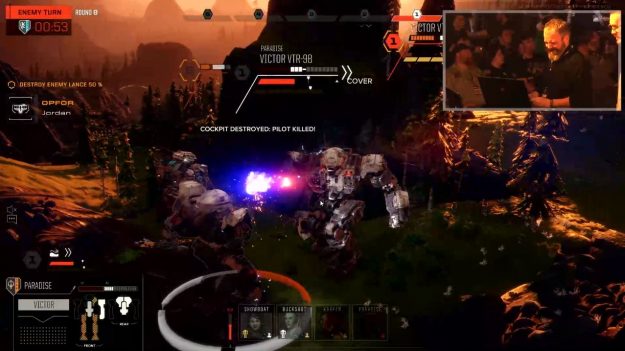 The battle in the east began to devolve into fisticuffs, with Quickdraw and Victors exchanging punches and DFAs. A lucky punch from Weisman’s Victor took out the opposing Victor’s cockpit, killing the pilot and suddenly catapulting Weisman back into the fight with his two far heavier ‘Mechs against Gitelman’s remaining forces.

It’s Not Over Yet

Things were not looking good for Gitelman. His Jenner, already without weaponry, soon came under assault from Weisman’s bruising Victor and Quickdraw. Gitelman’s Kintaro tried to aid it by firing on the Victor, its missiles causing an ammo explosion that injured the pilot and knocked the towering assault chassis over. 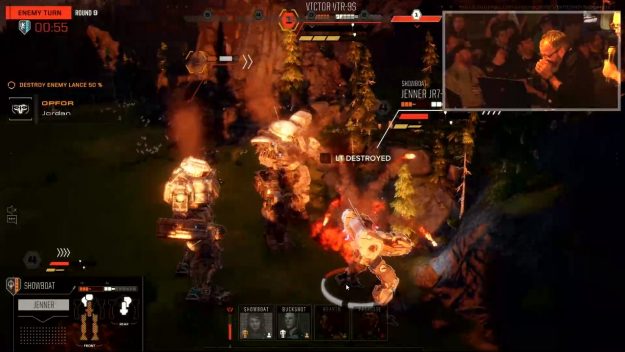 Although it had been punching for the past several turns, Weisman’s Quickdraw still had weapons, which it used on the offending Kintaro. He also commanded his Victor to stand up and attack the Kintaro, assuming the heavily damaged and weaponless Jenner to be no further threat.

Weisman was wrong. Gitelman ordered his Jenner to jump on to the Victor taking off its right leg and left arm and knocking it over. However, it proved to be a kamikaze attack as both legs of the Jenner suffered critical failure, leaving Gitelman with one ‘Mech remaining. He used that ‘Mech to great effect against Weisman’s Victor, alpha striking once again and destroying it, but shutting down in the process for the third time. 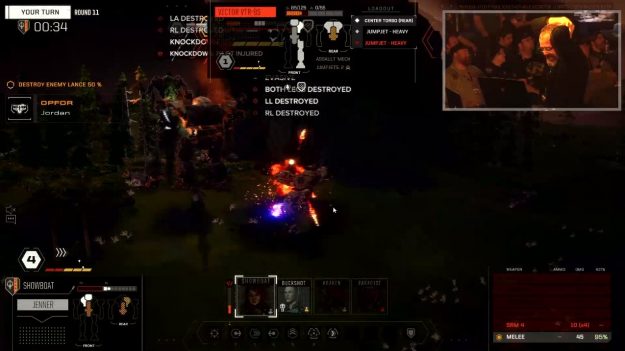 One damaged Quickdraw versus an overheating Kintaro. Who would win?

Weisman had two turns to use his remaining weapons to destroy the Kintaro as it restarted from shutdown, but couldn’t quite manage it. The Kintaro sprang into action, swinging to the Quickdraw’s side and unloading with all its weapons again, torching its left torso and injuring the pilot while the Quickdraw’s melee retaliation missed the Kintaro’s stripped chest.

Sensing that victory was in his grasp, Gitelman once again fired everything in an attempt to finish the fight. He came close, badly damaging the Quickdraw’s internals and once again injuring the pilot, but failing to kill either. The Kintaro once again shut down from the heat load.

Weisman then took his time lining up the kill shot, using his remaining weaponry to take out the Kintaro’s center torso and win the match. 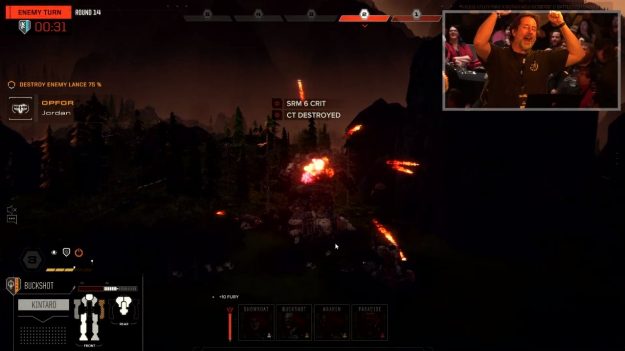 Grace In Defeat, Honor In Victory 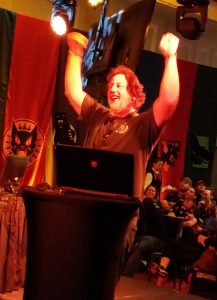 It was a close match which could have gone either way, but ultimately it was cold calculation that won the day over naked aggression.

With his last ‘Mech down, Gitelman was forced to bend his knee and accept Weisman as his lord for a period of one week, presumably mopping floors and fetching coffee for staff at the office. Which may or may not be all that different from a regular work week – I’m frankly not all that sure what a company founder’s role is after he’s finished doing the founding. Maybe it’s to play his company’s video games at conventions all across the country.

Congratulations to Weisman on your stunning, come-from-behind victory, and to Gitelman for creating the best darned BattleTech game yet. Or helping to. Or signing the checks paid to people who made it. I’m still not sure. 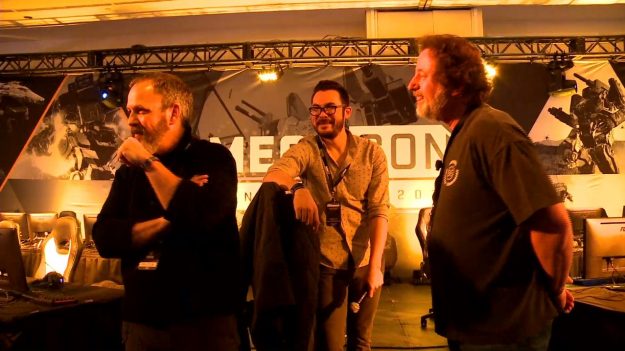 2 thoughts on “The BattleTech Match Of The Century: Mitch Gitelman vs. Jordan Weisman”