A lot of us will look back at Saturday morning cartoons from our childhoods and wish they’d bring them back. Sometimes it even happens – just look at Samurai Jack and Power Puff Girls. For most of us it remains just a wistful dream.

But not for everyone. Some of us decide to take action. And one of us decided to remake the BattleTech cartoon.

The Gathering Storm - A 'Battletech Animated' remake
Watch this video on YouTube.

It may be just the first 5 minutes, but it’s something to build on, and in all the technical ways certainly an improvement over the original. Try comparing the two:

BattleTech: The Animated Series - Episode 1
Watch this video on YouTube.

I managed to track down the man who spent the blood, sweat, and tears to bring this classic back to life and asked him a few questions on his work.

“When I first saw the BattleTech cartoon some years back I was completely blown away,” Vux tells me in an email interview. “That epicly badass introduction scene for the clans sent a die-hard clanner like me completely over the moon.”

Vux had been a BattleTech fan for a long time. An avid MechWarrior Online player, he’s done quite a few tongue-in-cheek introductory videos for new players on his YouTube channel already. Then, years later, he had an idea to bring back some of that original Saturday morning BattleTech magic. 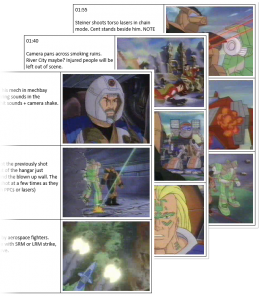 “The vision I had was a shot-for-shot remake of the cartoon, with adaptations and additions as appropriate,” he writes, thus beginning a labour of love. “I started planning it with my MWO pals October of last year. I wanted to keep the script and dialogue very faithful to the original, with the intent being to mirror the style/attitude of the show (and its cast) as well as we could.”

The first step would be to get actual footage to use. “Luckily all the ‘Mechs featured in the cartoon were available to pilot in MWO,” so getting that footage would be as simple as gathering a group of friends to do some robot inspired acting. “All the battles and ‘Mech-y scenes were recorded with a group of nice players I knew, who volunteered (after only the tiniest amount blackmail and threats of lasery death) to assist me in some private lobby games.”

“We went with a slower moving ‘massive steel beasts’ feel, like in the cartoon,” which presented a challenge as the ‘Mechs in MechWarrior Online are generally significantly faster, and most pilots just jam the W button to go full throttle. Training his volunteers was difficult, as it went against everything they’d ever learned. “This meant dozens of (painful) retakes for scenes like the Inner Sphere ‘Mech charge scene with spinning camera, and the scene where Redmond’s ‘Mech dramatically steps into frame.”

Things got even more difficult once the shooting started. Since they were using a game to record all the footage, they had to work within the game’s constraints, which meant, “If the scene didn’t go right, we had to restart the entire map since there’s too much battle damage on the ‘Mechs to suit continuity of the scene at that point.”

As Vux tells it, this resulted in “A lot of strained nerves from my ‘Mech pilots, but we got them done just before people got completely fed up with me saying ‘okay guys, back to positions and go again’ for the 20th time.”

From Strained Nerves to Building Worlds

Not all aspects of the cartoon could be recreated in MechWarrior Online. Certain models, like the Batu fighters and the Dropships, just don’t exist in game. What’s a budding director to do? “I scoured the interwebs trying to find 3D models for the Battletech fighters and Dropship featured in the cartoon,” Vux writes, however most of what he found “were either not compatible with my 3D program or restricted in usage rights.”

“Then I discovered MWO player Kilroy’s archive of Battletech models and he was cool with me using them in my project,” he adds, proving once again how close-knit the MechWarrior Online community can be.

Next came the added challenge of adding this models into the footage already taken from the game. “I had zero previous experience working with 3D models, but I learned to use a plugin for Adobe After Effects called ‘Element 3D’ for the actual 3D work.” Still, learning on the fly was slow going,  or as Vux tells it, “I spent many evenings experimenting with animating and compositing the models with the MWO footage, hoping to make it both look decent and match the original scenes as closely as possible.” 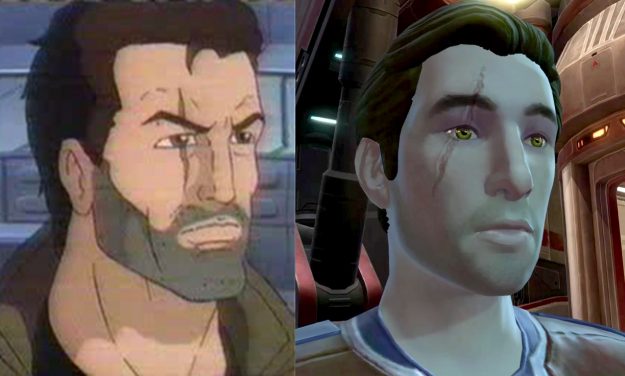 Other scenes, such as the conversation between Andrew Steiner (Adam Steiner’s older brother) and Star Colonel Nicolai Malthus and the establishing shots of the Somerset Military Academy, presented their own difficulties. Once again, video games come to the rescue.

“I used Star Wars: The Old Republic to record the indoor scenes as it had the perfect military-type environments and big computer consoles I needed. I was able to create a Steiner character in the game who looks very close to his cartoon self, down to the scar and 5 o’clock shadow. I used what emotes were available in-game to get the lip-sync as close as I could to his lines.”

Unfortunately, Star Wars didn’t have anything that even remotely looked like Colonel Malthus, which was a problem. “I discussed options with my creative assistant (chrx) and we concluded it would be way too difficult to reproduce those scenes in any decent manner.”

After weeks of intense deliberation, Vux came up with the solution: “[I’d] introduce the clanners in a more suspenseful way – only showing a brief initial flash of Malthus’ ‘Mech and his transmission readout, not showing their faces at all. This way I could keep the attacking force very mysterious until the very dramatic scene where the clanners are revealed and Malthus makes his entrance with that deliciously over-the-top, ‘Your insolence has provoked the fury of the clans!’ speech.”

The voice acting is intentionally a bit cheesy and somewhat over-the-top, just like in the cartoon.

The last ingredient to bring his project to life would be to give it a voice. As Vux tells it, “The cast is basically just a bunch of BattleTech fans I managed to  sweet-talk into doing the lines.” Just like shooting the ‘Mech scenes, the voice acting had it’s own set of issues as not everyone in the cast had access to a professional microphone forcing “a few people to record their lines with their phones as that was all they had available.”

Nailing the dialog was also tricky as the cast couldn’t use their normal register when speaking to get the true 90’s cartoon camp. “This meant that the voice acting is intentionally a bit cheesy and somewhat over-the-top, just like in the cartoon.”

All that was left was months of editing and then it was released upon a wider world.

Wrapping up, Vux left me with a few words for his adoring fans. “I’d just like to thank all the fluffy people who have left nice feedback and supported my channel, you guys (and gals) rock!”

4 thoughts on “The Gathering Storm: A BattleTech Animated Remake”