In a recent thread on the BattleTech forum, it was announced that Tribunal88 is building a website called The Machine Shop that gives access to printable BattleTech record sheets for any model and variant as well as an expanding number of features. This can be a lifesaver for pickup and unexpected games.

Tribunal88 also intends to add the ability to view and search the sheets by era, manufacturer, or other variables, in addition to the ability to modify and create variants and custom jobs. 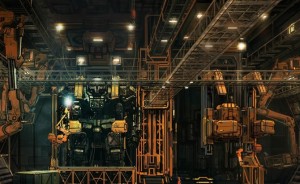 Access or build your war machine of choice – anywhere

Tribunal88 is a database administrator and developer who became interested with BattleTech in junior high. He was a military brat who traveled around, and BattleTech was a love that he took with him.

I asked him why he decided to make the Machine Shop:

Starting sophomore year (when I took my car with me to college), I’d come home on weekends if there was nothing special happening on campus. An unplanned BattleTech match would spring up every once in a while and of course I’d have left all my binders of ‘Mechs back at school (because you don’t cart anything you don’t absolutely need down 4 flights of stairs if you don’t have to).

Now, fast forward to after I graduated and started working in database development. The minute I started learning how databases worked, and how they could drive applications, I got the idea it would be perfect to build and store ‘Mechs in a database, slap a webpage over top of it, and then you could have access to your army anywhere, anytime, and print out your record sheets at your friends’ house or wherever.

It took some time for him to learn enough HTML to use his database know-how. The website was developed using the Grails web-framework to handle construction logic, communication, and security. jQuery and jQuery UI were leveraged for the interface, while the Raphael JavaScript library helps generate the record sheets. The data is kept within an Oracle XE database, so as the rules for BattleTech are changed and expanded, the data can be updated and the system will adjust with very little need for code slinging. The application itself is hosted by Glassfish.

It will never be a substitute for hardcopy or PDF manuals, but the work he is doing will “take that information and streamline it so that you can build what you want as quickly as you want without worrying about having to check dozens of things in the process. And then you could have access to your work anywhere, and others could build on your work as well using a common set of tools.”

Tribunal 88 has explained that he is open to help expanding the site, especially in adding additional vehicle types and the ability to export to Megamek. For those of us who find themselves on the road with a PC and suddenly have the opportunity for a game, want to see a friend’s new BattleMech or simply build a new variant of your own, The Machine Shop will have you covered.