UPDATE: It has been brought to my attention that the fleshy bit hanging from a turkey is called a “wattle,” not a “waddle,” thus identifying a clear lack of poultry knowledge on my part. This has been corrected. The original story follows.

It’s Thanksgiving. In America, anyway. In Canada, we celebrated Thanksgiving several weeks ago due to our short harvest season and our reservation for the month of November to be one-half solemn remembrance for our fallen soldiers, and then one-half insane consumerism in the lead-up to Christmas.

However, Canada celebrating early means that I am reminded of American Thanksgiving with plenty of time to prepare an article on the subject.

How can Thanksgiving possibly relate to BattleTech, you ask? Simple: some of these ‘Mechs look a helluva lot like turkeys.

As is often the case, I found myself browsing the vast databanks of Sarna’s stored ‘Mech designs thinking, “Man, some of these giant death machines look a lot like a bird I’d like to eat.” So then I figured I should point out some of my favorites and turn it into a fun way to celebrate Thanksgiving in a very BattleTech way.

So without further ado, these are the ‘Mechs I think resemble turkeys the most. 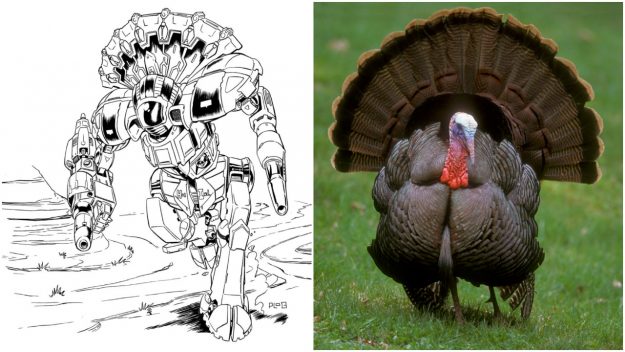 Right away, I centered in on the Huron Warrior. Yes, that frilly bit around the ‘Mechs head is most certainly designed after the ceremonial headdresses of Native Americans, but I hasten to point out that some of the feathers on those headdresses were from wild turkeys. Thus, the similarity between the Huron Warrior and a turkey’s tail feathers shouldn’t be too much of a shock. 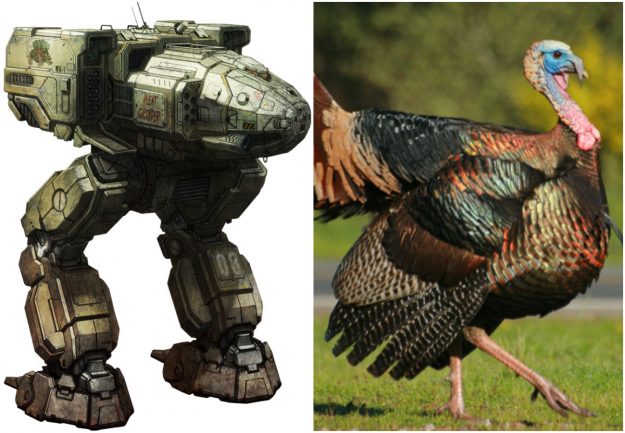 I have a friend who I used to play MechWarrior Online with. He always called his Stalker the “Murder Turkey” for the way it single-handedly dismantled opponents. I think it also had to do with the way the ‘Mech moved, which was sort of like a man drunk on wine and tryptophan, the sleep-inducing chemical that is found in roast turkey. Regardless, the squat and ugly Stalker is very much a turkey in ‘Mech form. 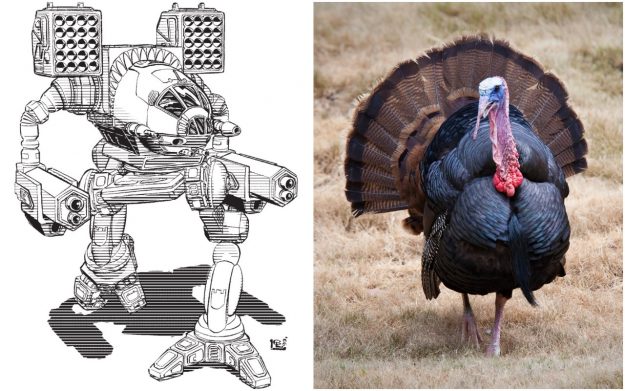 I mean, how could we not discuss the Mad Cat (or Timberwolf, if you’re a Clanner)? It’s got the backward-canted legs, the bulbous body, and the missile racks sort of do a good stand-in for the big frilly tail of a turkey. Replace those racks with a bunch of lasers as on the Alt. Config A and it sort of has the roundedness of a turkey too.

This might be a little on the nose given the name, but what the hell. It’s a giant turkey of a ‘Mech if there ever was one. Perhaps more so than any other design on this list. It’s just huge, and menacing, and rounded, and weird in all the same ways as a real turkey. Just about the only thing separating the two is the Turkina’s lack of a wattlle. 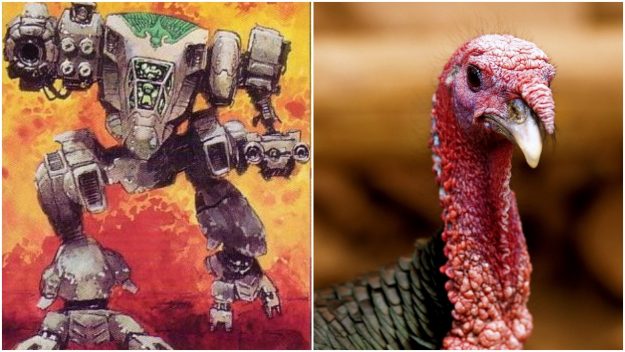 Sticking with Jade Falcon bird ‘Mechs, we arrive at the Black Lanner. This design is a little more predatory than a turkey really could ever be, but overall the similarities are there. Especially if we ignore the farm-raised turkeys and stick with wild turkeys, which are far sleeker. 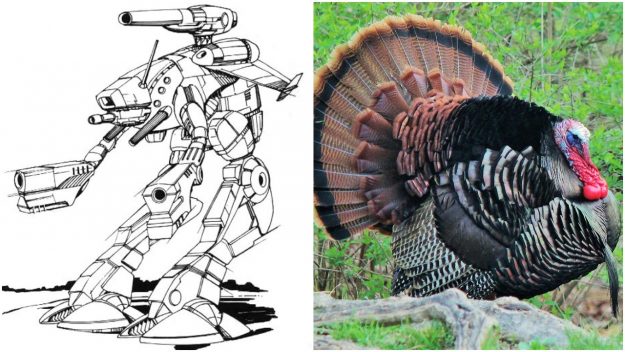 Why not the regular Marauder? Because the Marauder II is thicc in all the same ways as a turkey. Plus it has a giant autocannon sticking out of its head in much the same way a turkey has a wattlle. Only it’s on the top instead of the bottom. Then there’s the legs, the body, and the capability for short bursts of flight. It’s a turkey, no question. 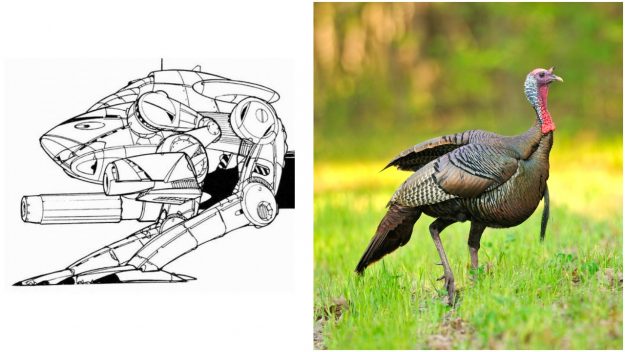 I’ve never really seen great pictures of the Maelstrom, but from what I’ve seen in the classic BattleTech art, it looks an awful lot like a turkey. Plus it spits charged particles and concentrated light beams while possessing enough double heat sinks to keep it cool, just like a real turkey. 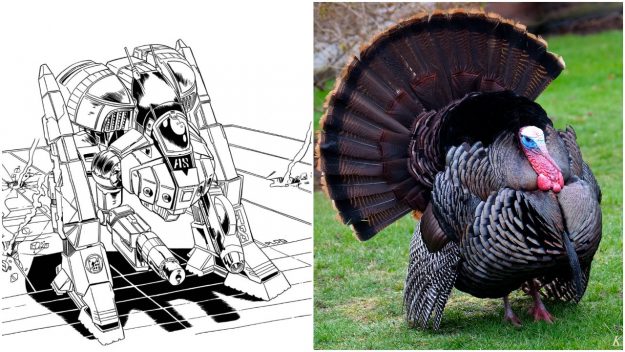 Another Davion chassis designed to take on the Clans, the Falconer possesses the same bird-like qualities as the very ‘Mechs it was tasked with defeating. This also makes it look a bit like a turkey. You can see the rounded nature of the torso and the long, slender legs, although they’re not quite the same as the bird-like limbs of other designs on this list. Still, it’s got that turkey air to it, so the Falconer is on the list. 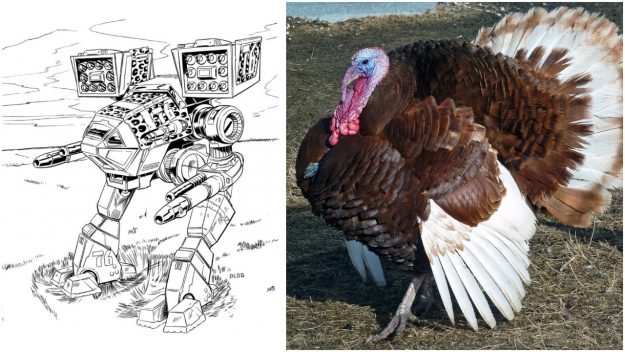 Arguably more turkey-like than an actual Mad Cat, the Mad Cat look-alike has all the same qualities of turkey-ness as the real deal. Perhaps more due to the somewhat smaller missile racks being more easily confused with a turkey’s tail feathers. Especially if you’ve had a few too many to drink after consuming an unhealthy amount of turkey and stuffing.

Did I miss one? Is there another turkey-’Mech that rightfully deserves to be on this list? Drop a comment and let me know of my horrible mistake.

And as always, MechWarriors: Happy Thanksgiving.

9 thoughts on “The ‘Mech That Looks Most Like A Turkey”