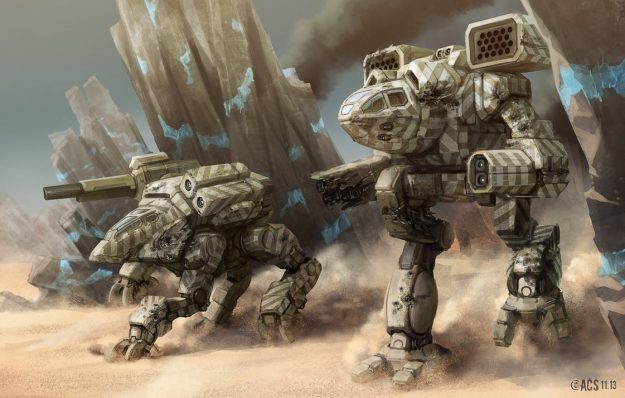 Well, they were never really forgotten–you can find Quad ‘Mechs as late as the 3140s with the introduction of Hell’s Horses QuadVees (and man, are those ‘Mechs ever a trip!). But Quad ‘Mechs, even though they certainly exist and a few of them are even fairly notable, are pretty easily forgotten. Why is that?

Maybe it’s because Quad ‘Mechs sort of ruin the whole image of a MechWarrior. ‘Mechs are often seen as these avatars of their pilots but made of metal and myomer, armed with more weapons than a battalion in today’s army and capable of leveling a city block with a single press of the trigger. It’s kinda hard to personify the person within if the thing on the outside is this four-legged beast.

For that reason, Quad ‘Mechs remain fairly rare in comparison to their two-legged counterparts, but there are also in-universe reasons why Quad ‘Mechs aren’t seen more often. Being rare and strange meant that technicians often didn’t know how to work on them, and it also meant spare parts were harder to come by. It’s easy to get a spare arm for a Centurion, but a spare leg for a Jaguar is a little harder to come by. You’d need a direct connection to the factory where the ‘Mech is built, which meant that Quad ‘Mechs often saw service only in the highest echelons of any military. 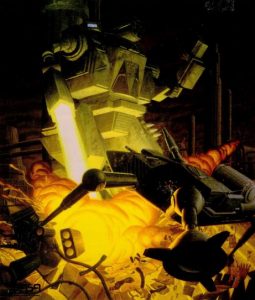 There were also unpopular with pilots for being… y’know, weird. You didn’t have a torso to twist, and not all Quads had turrets to make up for it. Having no arms or hands meant you couldn’t really interact with your environment in any way other than stomping the heck out of it, and on top of that, no arms meant no arm-mounted weapons, which seriously hampered a Quad ‘Mech’s firepower.

On top of that, everything on a Quad is essential. Sure, if you lose a leg you’re not nearly as useless as a two-legged ‘Mech, but losing an arm still allowed most ‘Mechs to run away to safety. Losing a leg seriously hampered a Quad ‘Mech’s mobility, making them unable to escape should a firefight turn bad for the home team.

That’s not to say that Quad ‘Mechs weren’t without advantages. Unlike other ‘Mechs, Quads could dance side to side in a sort of crab walk (even if the design was more canine than crabby) and they were very stable firing platforms (noted by their -2 piloting skill bonus when all legs are fully-functional). Quads are also shorter than most ‘Mechs, allowing them to gain concealment from terrain that would leave other ‘Mechs partially exposed.

Still, Quad ‘Mechs are rare in fiction and in real life. Just two Quad ‘Mechs have ever appeared in any BattleTech video games–the Scorpion in MechWarrior, and the Tarantula in MechWarrior 2–while the rest are rarely mentioned in novels.

Which is why I felt it was necessary to give these big four-legged brutes the proper tribute that they deserve. Let’s hit a few of the more well-known Quads and then you can inundate me with your favorite–and weirdest–Quad ‘Mech designs. 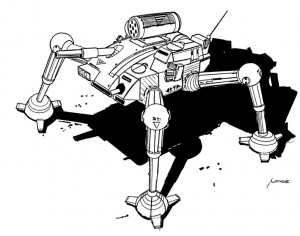 I admit, I have a soft spot for this ‘Mech. Not because I ever got to use it or anything (as I mentioned, Quads are notoriously absent from any BattleTech video games)–I just like the look of the thing. Kind of like if a modern APC sprouted dainty legs and tried to walk away from its problems.

I also like the design. A PPC and an SRM-6 is nothing to sneeze at (at least in the 3020s), and the Scorpion’s speed and sufficient armor meant that it could serve in a variety of combat roles. Things got even better after the Reseen designs emerged in 3067, although the SCP-12S version gets rid of the PPC for an LBX-10 in a move that makes it entirely ammo dependent.

Give me the SCP-10M with its Heavy PPC and vertically-firing LRM-10. Yes, it looks like it belongs more in anime than BattleTech, but dammit, it looks good. 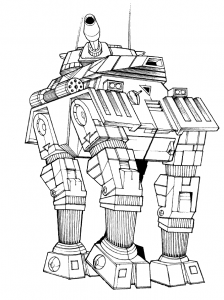 Now, if you wanna talk about ‘Mechs as walking tanks, it doesn’t get any closer than the Goliath. This thing is, quite literally, a tank that has sprouted legs. On the plus side, that turret means that you can shoot in any direction. On the downside, you look like a militarized giraffe that was recently decapitated.

The Goliath isn’t bad, as far as Succession Wars-era 80-ton assault ‘Mechs go. A running speed of 64 kph and an armament of two LRM-10s and a PPC puts it in line with most other 80-ton ‘Mecsh of the era. It even saw some prominence in fiction thanks to a brief appearance in Warrior: Riposte.

But man, does this thing look just freakin’ goofy.

The Reseen design improved things somewhat, giving it a more “beast of burden” look than a tank with delusions of quadrupedia (which is technically an Italian word I’m repurposing because it sounds cool). I do like the GOL-5D variant, but that’s just because I’m a sucker for a Rotary Autocannon. 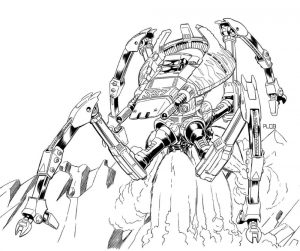 When I saw the Tarantula for the first time in MechWarrior 2, I thought, “Cool, a four-legged ‘Mech!” Then it died to a random PPC blast and I thought this thing was a fragile piece of !@$%.

And indeed, it is.

The Tarantula is a scout ‘Mech. It gives the Spider a run for its money with 8 Jump Jets, a running speed of nearly 130 kph, and an armament of 2 Medium Lasers and a Streak SRM-2. It also has ton more armor than the Spider as well. So why is the Spider so much more popular than the Tarantula when this thing actually looks like an arachnid?

Probably because the Tarantula looks freakin’ creepy. I wouldn’t want to pilot one, even if it is an extremely good scout ‘Mech. 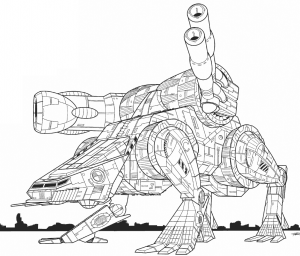 Now we’re heading into the Quad ‘Mechs that can really sow some discord. The Barghest might have four legs and all of its weapons in the torso, but those weapons are fierce. A pair of ER Large Lasers backed up by an LBX-20 is enough to give any ‘Mech a rough day.

Besides that, the Barghest was also one of the first Quad ‘Mech designs to look truly mean. It has the posture of an angry canine: hunched and ready to pounce. Plus, the design evolved in the absolute best direction, mounting Heavy Gauss Rifles, Ultra AC/20s, ER PPCs, and eventually Light PPCs and MMLs.

It’s just a shame the Lyrans didn’t make more of them. 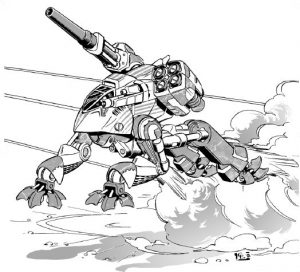 I have a confession to make: I actually really liked MechWarrior: Dark Age. Not the fiction, mind you–the whole HPG blackout and all these random factions made it weird. No, I liked the ‘Mechs, and I’m not ashamed to admit it.

But the Thunder Fox is super cool. It’s a warhorse ‘Mech aimed straight for my heart. It’s cheap, it’s well armed, and it’s well armored. You can make an army of these bad boys and take down anyone in the Inner Sphere and still have C-Bills to spare.

Admittedly, the art and overall design make the Thunder Fox look a lot swifter than it actually is. Top speed is 64 clicks (which is not exactly stellar for a 55 ton ‘Mech) with a trio of Jump Jets to turn it around if it finds itself pointed in the wrong direction. It only has a ton of ammo for its Light Gauss Rifle and Streak SRM-4, so it’s not exactly equipped for prolonged engagements.

But you gotta admit, the Thunder Fox looks freakin’ cool. If I had to pilot a Quad, this would be the Quad for me.

So what’s your favorite Quad ‘Mech? Let us knew in the comments!

20 thoughts on “The ‘Mechs That Time Forgot: Quad ‘Mechs”